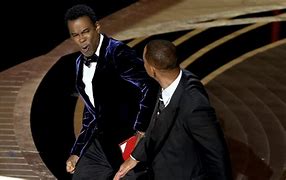 And perhaps it was all designed to be reminiscent of another time when ABC needed a WTF incident on live TV to breathe life into a struggling franchise.

Will Packer was tasked with reinvigorating an Oscars awards broadcast that had hemorrhaged more than half its viewership this decade and more than three-quarters the level it peaked at a quarter-century ago.  His goals as executive producer were both noble and strategic.  Increase diverse representation both in front of and behind the camera.  Find touchpoints for audiences not otherwise invested in the nominated movies and actors to care about.  And find ways for organic engagement to draw those using social media as their primary screen to have a reason to at least include old fashioned TV in their media mix.

Many of the efforts that Packer, the Academy and the ABC team attempted were successful, or at least in hindsight seemed well-intentioned.   The casting of three female co-hosts, one white, one straight African-American and one gay African-American, was bold if nothing else.  Their pointed monologue aimed squarely at the politics of Florida and Texas was the epitome of woke, but delivered with authenticity.  Honoring a female Best Director, a deaf Best Actor and a Best Picture released on a streaming service were unprecedented events that produced some buzzworthy moments.  The emotional sights of Pacino, Coppola and DeNiro and a wheelchair-bound Liza Minnelli on stage to commemorate the respective Golden Anniversaries of THE GODFATHER and CABARET produced deserved standing ovations.  Including categories that honored choices voted on via Twitter opened up fan inclusivity in a way not seen beyond the baseball All-Star Game.  And despite the reaction of the traditionalists that were aghast at the repositioning of eight lesser award categories to bumper status, the goal of bringing the telecast in within its scheduled three hours for once was, frankly, necessary.

So amidst all of this positivity, Chris Rock decides to compare Jada Pinkett Smith’s alopecia-affected scalp to a Demi Moore buzzcut from a 25-year-old creative dud,and pisses off Will Smith enough for him to cold-cock him in defense of his woman, unleash a diatribe of f-bombs that Australian TV fans were able to translate for the US audience that ABC attempted to mute via the same Twitter that took the vox populi pulse and somehow overshadow his personal Apex Mountain of winning a Best Actor award for his outstanding work in KING RICHARD.  (Ironically, Smith channeled ALI, perhaps his previous strongest dramatic role, in the process).

Which brings me to the previous time ABC saw a brawl unfurl on live television.

Back in 1981, ABC was looking to make a dent in late-night weekend comedy with FRIDAYS, a short-lived attempt to echo SATURDAY NIGHT LIVE unleashed at a time when SNL was going through a horrid transition period without Lorne Michaels and the departure of its original cast.  Despite some inspired casting that in hindsight seemed prescient (a younger Michael Richards and Larry David were both among the regulars) and some decent creative reviews, ratings were struggling. Andy Kaufman, a rising star on the network’s successful prime time series TAXI whose stand-up career was hitting its zenith, was a guest host.  In the middle of an otherwise bland sketch about getting high, Kauman broke character and stopped the sketch, lamenting “I feel stupid”.  Richards grabbed the cue cards and threw them down in front of Kaufman, prompting Andy to throw a glass of water in Richards’ face.  The scene then devolved into a food fight, producer (and one-time variety show regular) Jack Burns stepped on stage to physically restrain Kaufman, and the show hurriedly cut to commercial. 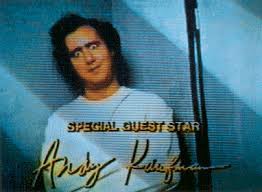 As eventually dramatized in the Kaufman biography film MAN IN THE MOON, it was later posited that Kaufman and Burns had arranged all of that in advance, with the rest of the cast and, indeed, the network, otherwise unaware.  The movie’s version was that this was all done to inject some attention and ratings momentum into the show.   The next week, Kaufman returned to offer an apology at the start of the show.  Ratings were up slightly.  Eventually, things returned to normal, Kaufman (and TAXI) eventually found their way to David Letterman’s even more ambitious late night show and NBC, and FRIDAYS was history.

So in today’s more immediate and social media-influenced world it’s hardly a leap to assert that this was perhaps a way to draw viewers back to their sets late in a telecast that was already looming to run beyond its three hour goal and create perhaps the most anticipated acceptance speech in real time in recent Oscar history.  Certainly, it succeeded in getting even this Baby Boomer to grab his phone, search Twitter, engage in speculative conversation and pay attention.  Intriguingly, despite the fact that Smith had arguably committed a potentially felonious act of assault, he was seen enthusiastically clapping for the reunited GODFATHER talent as they took their bows in the moments leading up to the Best Actor award.

Smith then seized the moment to deliver an emotional acceptance speech, praising Richard Williams, Denzel Washington, his wife and G-d almighty in the process.  And despite the late hour and a couple of clear attempts to cut away from his delivery prematurely, Smith went on for several minutes and eventually delivered an apology to the Academy and to the viewing public, if not directly to Rock.

My own social media feed was rampant with speculation about the authenticity and the motivation behind Smith defending his wife’s honor puglistically.  With the history and the eventual revelations of the FRIDAYS incident as foundation, I’ll simply offer this:  why wasn’t Smith removed from the proceedings by the Academy if they weren’t already in on it?  Having already violated the sanctity of the event, having him not present to accept an award wouldn’t have been tragic.

In a few hours we’ll have concrete data to see if any of this really mattered.  Did the show’s audience build in the last hour despite the fact that thanks to Smith’s longer speech it still ran 38 minutes long?  Was social media engagement spiked significantly after the “Incident”?   Do any concrete metrics emerge that point to dual-screen connectivity that may lead to enhanced sales opportunities for future years’ Oscars for the Disney sales force?  And, first and foremost, was the show able to break 10 million viewers again?  (The short answer is “yes”; see updates below.) 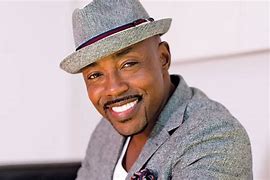 Packer is known as an unapologetic, successful risk taker as a producer and an advocate for underrepresented audiences.  If nothing else, he created enough provocative moments to at least warrant this Monday morning quarterbacking.  The fact that the shot heard round the world involved two iconic African-American talents can’t go completely unnoticed, either.  Scripted or not, it brought the Oscars back into media zeitgeist beyond the more esoteric milestones seen last night.

Whether or not the net impact was greater than that which FRIDAYS saw remains to be seen.

I still stand by gambling and cold cuts as alternative methods next year.  After all, you can only pull something like this off once.

FIRST UPDATE: According to “fast national” Nielsens, which do not yet factor in post-11 PM ET viewership on either coast (which is when Smith’s acceptance speech happened), per the Hollywood Reporter “ABC’s broadcast of the Oscars drew 13.73 million viewers and a 2.9 rating among adults 18-49.  Time zone adjustments that factor in the live telecast should be available later Monday, and final same-day ratings, including out of home viewing, will be out Tuesday morning. Live telecasts typically (though not always) see their ratings adjust upward after those elements are factored in…Still, the early figures put Sunday’s show well ahead of the final numbers from last year’s scaled-down ceremony, which had all-time lows of 10.4 million viewers and a 2.12 rating in the 18-49 demographic. The early figures show a 32 percent jump in total viewers and a 37 percent bump in adults 18-49.

SECOND UPDATE: Per DEADLINE, “Mere minutes after fast affiliate data for the 94th Academy Awards was out, the Disney-owned net that pays tens of millions a year to broadcast Hollywood’s biggest but stumbling night was out with the adjusted fast nationals.  Moving up a bit from the preliminary data, the 2022 Oscars is now estimated to have had 15.4 million viewers and snagged a rating of 2.9 among adults 18-49.   Apples to apples with the same metrics, that’s a 56% increase in audience over last year and 68% in the important demo.   However, even with what looks like big leaps over 2021, the 2022 Oscars are still the second lowest in AMPAS history.

Mission accomplished, to an extent.  Maybe next year someone will try and draw blood?

7 thoughts on “A puncher’s chance for relevance”