Caught WEST SIDE STORY in a nearly deserted movie theatre on Christmas Night.  As someone whose earliest memories of his childhood involve the original Broadway cast LP of the 1956 stage play that started it all being played at least once a week on the console RCA Victor turntable despite the many scratches the album continued to incur, going to see this one was a no-brainer.  With those first memories being from the apartment I was born into in upper Washington Heights, mere miles from the setting of the film, I had further strong personal ties that demanded I see this.

My other personal connection to this invovles my recent opportunity to work with the living legend that connects this Steven Spielberg remake with its 1961 theatrical predecesor, the iconic EGOT-winning Rita Moreno.  As the matriarch and the emotional glue of the Alvarez clan that I came to love on the Netfix reboot of Norman Lear’s ONE DAY AT A TIME Rita was absolutely brilliant, lithe and energetic in ways that belie her now 90 years on Earth. As an accessible, genial colleague who tolerated and indeed encouraged my personal obsession to get her to guest on the current version of THE $100,000 PYRAMID, becoming one of the few celebrities to guest on this version who was a frequent guest star on the $10,000 version of the ’70s, it was especially rewarding to see her being given the opportunuty to return to the franchise that gave her her first Oscar in 1962 for Anita  and may well give her yet another chance at an Oscar 60 eyars later as the newly created Valentina, who served a similar role as gentle but firm trusted older friend in this version of WEST SIDE STORY as she did on ODAAT. 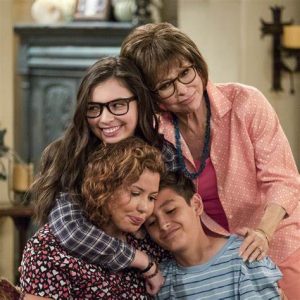 It should come as no surprise that I loved the movie, and especially Rita’s moving performance.  WEST SIDE STORY is a love story, its roots tied to ROMEO AND JULIET in the troubled world of gentrification and racial intolerance that sadly rings as true today as it did when it was first produced.  It is a love story that transcends people and tackles  issues with the love of family, culture, neighborhood and self.  And for me, it touched upon two such loves that are particularly resonant at this time.

I met Rita on the Sony lot I now live close by to.  When I joined Sony in 2015 I as overjoyed with the chance to work on a studio lot once again, the first time I had done so since my early days at FOX in the 80s.  There is something truly magical about being able to drive through a studio gate where the security guard greets you cheerfully and personally, stroll the driveways and alleys that crisscross the soundstages ever dodging the trucks and caterpillars loading supplies and sets in place, occasionally running into golf carts speeding couriers, executives and talent to their work at dizzying speeds of a dozen miles per hour.

I lived close to the Sony lot when I worked there in the life I left behind.  Occasionally I’d walk to the lot, amazed I could amble to such a famous and busy entetainment venue and earn a wonderful living doing so.  When I made my choice to move on, I landed in a furnished room in the Valley.  As some of you know, that all-to-brief return to living in the 818 introduced me to the most beautiful and supportive people I had ever met, one in particular that I still cannot discuss in more detail publicly.  This person’s own connection to the Sony lot is considered one of that person’s personal career highlights; their social media account proudly chronicling how significant it was to audition and land a role in a major production shortly after their mother’s ultimately passing.  One of the few and most heartwarming conversations with this amazing person was how strongly they were inspired by passing through the gate and how they actually felt it was fate that someone had an office there–their strongest dream–had entered their life. 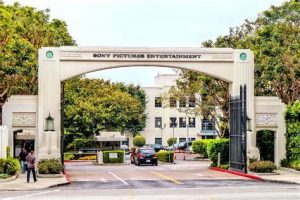 I never felt more connected to any other person before, and few since.  That’s how deep my love for Sony was and is.

So I suppose it’s kismet that when my idyllic living situation in the 818 ended I wound up finding a room even closer to the lot.  The lot’s closed to visitors to these days, thank you, COVID-19.  But it’s still a wonderful route to take my long morning walks around the ‘hood before the homeless awaken, and frankly a lot safer than the neighborhood that surrounded my previous residence.  The summer days are less oppressive, the winter rains a little less harsh and the 7-11 nearby has all the newspapers I still love to read.  Im a lot closer to the airport that I frequent to maintain and grow ties to people who actually still want to live their lives outside their homes, a list that tragically shrinks with every disturbing day’s worth of Omicron news.

I love the Westside of Los Angeles as much as the Jets, the Sharks and Valentina loved the West Side of Manhattan.  I love the world and the career that allowed me to experience it as impactfully as it did.   I vow to set foot on that lot again, ideally with someone who will be as inspired by walking uner the rainbow and seeing actual Oscars as the person I once had that experience with.  It will most likely not be the special person I mentioned above.  I truly hope it will be someone else who will be even more radiant and eye-popping in tow.   Much like the light of the Sony logo, it keeps me going.  No matter how hard life may try and stop me.