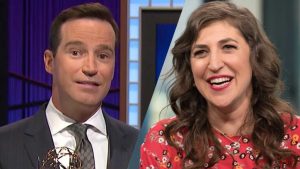 So after an emotional and elongated search for who will succeed Alex Trebek as the host of Jeopardy! the decree has come down from top Sony TV execs that Mike Richards, the current executive producer of the series, will take over the daily syndicated series this fall and Amy Farrah Fowler herself, actress/neuroscientist Mayim Bialik (and name any other emcee with that description!), will host other versions of the show, including an upcoming ABC primetime version of the show’s successful college championship.

What started out as a somber private casting call for a coveted game show hosting gig somehow devolved into a scandal-laden and social media-barraging political campaign, with revelations surfacing of Richards’ legal  and extramarital difficulties while show running The Price Is Right and ardent fanboys of Levar Burton and Aaron Rodgers, let alone Ken Jennings, claiming that the search was rigged against their choices and that Richards somehow orchestrated a coup to steal the gig for himself.

I am fortunate to have worked for and with with many of the executives that were involved in this decision, and in full disclosure will cop to a strong personal fondness for Mike, who I had the pleasure of working closely with during his brief stint as the host of the short-lived GSN revival of The Pyramid and during his first days of his Sony executive tenure.  He is indeed passionate, a student of the genre and camera-worthy.  I can’t and won’t speak to how and with whom he carried out personal relationships with during his non-Sony tenures, nor will I weigh in on the motivations or accuracy of his accusers.  What I will attempt to do is weigh in on some of what people want to believe with my best informed guess on what really occurred:

— There was a succession plan for Alex that was already under way when Mike was hired.  Alex was terminally ill and nearing 80.  Jeopardy!  annually generates just south of $100 million cash to Sony Pictures TV  Studios’ botton line and is one of its strongest brands.  This was no mere hosting gig at stake.

— Mike was hired as a strong and honored show runner with specific expertise at overseeing two daily shows at once and effectively co-mingling support teams to achieve operating efficiencies.  There was arguably no one in the business more qualified to succeed Harry Friedman in his role of running Jeopardy! and Wheel of Fortune than Mike.

— Ratings, and therefore Jeopardy!’s profitability, have declined markedly in recent years, and there is little reason to expect this trend will be reversed.  There are organic shifts in how and where entertainment is being viewed that the pandemic has accelerated, and new ways of approaching how shows are produced and with whom are necessary.

— There is strong reason to believe that the original successor to Alex was indeed supposed to be Ken Jennings, and it is no secret Alex himself openly campaigned for that as his condition worsened.  That is one reason why Ken was given a six-week ramp as guest host and was first choice out of the box.  It is my personal belief that part of the succession plan was indeed preordained, with Mike’s passionate support.  But as the challenges of producing the show under pandemic conditions and the accelerated audience declines revealed new challenges, Sony management intervened and raised the valid question–how can we best maintain this franchise and best sustain inexorable decline in traditional viewership?  Hence the decision to look beyond Ken was made for Mike, not necessarily by Mike.

— As was the case with the talent searches to replace Regis and Kathie Lee, daily syndication took advantage of  promotional hooks to find a successor and extend it over several key ratings periods, generating a publicity boost tailored to a different incremental audience segment every week or two weeks.  It is no surprise that many of the selections had tie-ins to news franchises, as the majority of stations in the show’s lineup generate their own profits from network news identities.

— In the specific cases of Rodgers and Joe Buck, their arcs aired adjacent to the NFL Draft and the start of pre-season.  It is also no secret that the FOX-owned stations have coveted Jeopardy! and Wheel and may yet wrest them away from ABC-owned stations in the next selling cycle.  We believe that was part of the rationale for Buck’s stint.  As for Rodgers–his negotiations with the Green Bay Packers have been its own tabloid fodder for months, and his CAA representation very likely embraced the concept of using the show as potential leverage for his contract renewal, a publicity magnet no doubt embraced by Sony.

— Almost none of these stunts produced any measurable impact on ratings.  While testing was indeed done on the various talents involved to reveal their qualitative plusses and minuses, they were largely perfunctory.  The executives involved in the final decision were businessmen with strong chops in finance and corporate planning, not weighing in on who can best joke with contestants.

— Simple math tells you that if you ask someone who is already on your payroll to take on the incremental responsibilties of someone who left a position you will spend less than if you hire someone new to replace the open slot.   Steve Harvey, for example, reportedly makes $20 million a year just to host Family Feud, perhaps the best cohort example to a high-rated daily syndicated game.  I can categorically assure you Mike will make less than that to host Jeopardy!, though his other two jobs with incentives may bring him personally into that league.

— As for Mayim: She was quite good on camera; no surprise, she’s been a fine actress for more than 30 years.  And her iconic character is associated with braininess, so she’s an archetype.  She is recognizable and popular, two qualities that likely lead to her testing quite well.  She’s also busy with a sitcom (on FOX!!!) and other projects and is a single mom.  When the revelations about Mike surfaced, the easiest way to deflect and diffuse any “me too” cries is to take the bold step of hiring a woman for the job.  Mayim emerged as a convenient way to achieve both goals.  Limiting her involvement to a series of short-order spinoffs gives her maximum career flexibility, an additional promotional hook from top-tier talent for ABC to jump on when these shows are ordered (think Elizabeth Banks or Alec Baldwin), and also minimizes the incremental cost of hiring emcee-only.  We’d safely estimate Mayim will make $2-$3 million to host 8-10 episodes of the College Championship, which is a lot less than Ken Jennings would have gotten.

— Social media outcries are inevitable in this day and age.  The Levar camp in particular is particularly outspoken.  Indeed, their passion got Levar the audition week in the first place–think Betty White hosting SNL.  Respectfully, Levar had more desire than ability.  I am fairly certain that was revealed in qualitative research, and his ratings were unsurprisingly weak.  Few of his fans who did watch watched exclusively for him, and the loss of those outraged by the choices that were made won’t materially impact the show’s future.

And that may be the lesson learned in all of this.  It’s the show, not the personality, that has endured since 1964, let alone 1984.  Art Fleming was a B-level actor and lay preacher before he started his 11-year run.  Alex Trebek had hosted several short-running game shows in two countries and more busted pilots than a raid on a United Airlines takeover of a dispensary before he started his 36-year run that only death could halt.   Mike Richards is a game show fan who had hosted roughly 100 or so episodes of three minimally viewed series on secondary networks before this ascension.  He is no more or less qualified at this point than any of the icons who preceded him .  He is perfectly adequate enough for the years ahead.

And for anyone who thinks it’s blasphemy for a producer to be a host remember this: the guy who created Jeopardy!, Merv Griffin, hosted game shows himself before he became a producing legend.  If anything, Mike is therefore even more qualified to do this.  And I’m personally hoping he does so for a long long time to come.

2 thoughts on “The answer is–adequate?”