The Super Bowl viewership figures came out yesterday, one of the few situations these days where research (excuse me: data science) executives crunching numbers are held in as high esteem as the executives and pundits who they typically slave away for anonymously.  Later yesterday, ViacomCBS held its investor day, which by its end saw its corporate name changed to Paramount.

The events turned out to be related and will in future years be inexorably tied to watershed moments that effectively has told Wall Street, the media industry and, indeed, all of us that the way we watch and consume content will absolutely never be the same as it’s been.

The viewership figures for SBLVI effectively justified the decisions announced by ParaViaC (they’re still officially transitioning.  In total viewership, NBCU claimed several wins versus recent years.  The 112.2 million total viewers was up a considerable +15% year-to-year, the only two years so far where Nielsen’s estimates for out-of-home viewing has been included in their estimates for viewing on linear television.   Versus 2018, the last time NBC carried the game, total audience was up +6%, not including out-of-home viewing estimates. 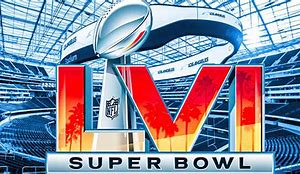 What is most striking is the exponential growth this year’s streaming viewership vs. the same benchmarks.  This year 11.2 million viewers watched on streaming services alone, nearly double the 5.7 million that watched last year and +460% above the 2 million that watched in 2018.  That viewership occurred on 6 million different devices.  In just four years, the incidence rate of a Super Bowl viewer watching a streaming service increased from approximately 1 in 50 to 1 in 10.

So all the news that came out of CViaPar yesterday announcing its corporate rebrand, global focus and billions of dollars in content investment on a road they believe will triple their current subscriber base to over 100 million within three years is all the more understandable.  We are at a technological inflection point where it is abundantly clear that television will never be limited exclusively to one screen in one location, nor must the monetization of those screens be limited to the United States.  A 4.5-fold shift in four years in Super Bowl viewing, tens of millions of global subscriptions secured and the promise of even faster devices and networks as the New Roaring Twenties unfold are all you need to know as to why the names of the networks that ParViaC owns were all but relegated to afterthought status, and the content provider, Paramount, will supply the moniker going forward.  Similar to how Disney dominates the ABC brand, and the focus NBCU has put on its Peacock brand, the umbrella is now the overcoat, and those entities that own their content exclusively, globally and in perpetuity are in the best shape to capitalize on this monumental moment.

In almost dizzying fashion, Shari Redstone, Bob Bakish and yes, Tom Cruise announced a flurry of projects, clawbacks and restructurings that pivot and expand its IP across multiple platforms, eliminate a number of legacy silos and ultimately will feed Paramount+ first and foremost.  South Park’s 27 seasons will be exclusive to this infrastructure.   Showtime originals will finally be available on the Paramount+ platform, indeed for a surcharge but still allowing a seamless experience for anyone addicted to Yellowjackets (I personally predict it will be the next nascent hit to explode in viewership and impact in its later years, much like Breaking Bad and Succession did).  Two new Mission: Impossible movies are already in production.  A SEAL TEAM movie has been commissioned–bear in mind that this show was one of the first to successfully transition from good old CBS to Paramount+.  Beavis and Butt-Head, Dora the Explorer and Sponge Bob will produce new episodes for new generations for a primary platform not connected to MTV.  NCIS: Sydney will be the next extension of CBS’ most viewed and most enduring franchise (though, to be fair, in 2020-2021 an average episode was seen by only about a million more viewers on CBS than the Super Bowl was viewed on streaming services.)

But for as seductive as the streaming future seems, there is a gnawing reality an era with Twitter, group chats and phone push notifications, a 40-second streaming delay can lead to spoilers of big plays. And with the increase in legalized sports gambling, it could also ruin the experience of trying to bet on the action. ty check that needs to be addressed.  According to CNET:

Phenix, a technology company that provides the infrastructure for real-time video feeds, compared the streaming lags on apps from the NFL, Yahoo Sports, FuboTV, Hulu Plus Live TV, CBS Sports and YouTube TV. It found that last year’s game (which aired on CBS) streamed fastest on YouTube TV with a delay of 42.2 seconds — but that was only slightly quicker than the roughly 43-second delay from the NFL and Yahoo Sports apps. FuboTV came in at 44.8 seconds, while Hulu Plus Live TV finished last at 46.2. 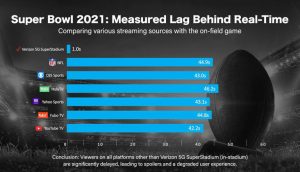 So while the long-term view is rosy, the short-term road to it is, well, lagging.  Netflix has struggled in maintaining its own subscriber growth rate, which led to some turbulence in its stock price that had ramifications across the entire media stock spectrum a couple of weeks ago.  As more new subscribers who do have skin in their games realize this, it will inevitably lead to consternation.  I had my own CTJ moment while watching Sunday’s game on the Peacock feed.  With phone in hand to be able to vote on commercials within the USA Today Ad Meter panel, I was getting score alerts ahead of seeing plays unfold on the impressive new 4K set my roomie treated us to over the holidays (awesome sound, BTW).  When Cooper Kupp scooped up Matthew Stafford’s pass for the go-ahead score within the last two minutes, I knew it had been completed before I saw Stafford drop back.  That, bluntly, isn’t progress.

Nearly 90 years ago, a young Ronald Reagan would do play-by-play recreations of Chicago Cubs Road games for WHO radio in Des Moines, Iowa using play-by-play descriptions delivered by morse code from a colleague at the game which would be interpreted for Reagan who would then improvise a narrative.  In that era, no one knew the actual action had occurred minutes or even hours earlier.   In a multi-screen world where cellphone data delivery is only improving, it is imperative that lag time issues be dealt with.  This year, Peacock elected not to transmit the gam4 in 4K even to the sets that can receive it.  So, while Roomie had hoped to show off his shiny new set to the person in the house who cared about the clarity of the picture, it actually wasn’t in actual 4K.  Frankly, to me it looked and sounded outstanding, nonetheless.

For the moment, lag time is a reality in the media landscape, much as there is in life itself in some ways (aren’t we thrilled that indoor mask mandates still remain in effect, lucky fellow Angelenos?).  Inevitably, those lags will dissipate, and we will be fully immersed in a world where movies, TV, streaming, domestic and international will be part of one unified, interconnected ecosystem.   A generation will emerge that will more likely confuse CBS with the name of a drug store chain than associate it with Tiffany.  And historians will look back to this day when CParVia hurled a rock in its own Eye.