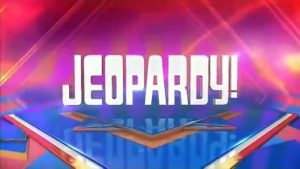 A lot of file space was devoted here late in the summer to the saga of Mike Richards, my former Sony colleague whose rapid fall from newly anointed heir to Alex Trebek’s throne to the loss of an eight-figure salary and public shaming that had him reduced to a punch line by Labor Day.  As regular readers know, we have ultimately laid the responsbility of this at the feet of top Sony executives who willfully ignored both the pleas of the internet trolls and Richards’ questionable history with females and remained resolute in their support and focus on the franchise that exceeds more than $80 million a year in pure profits.  We now have a better idea why.

Matt Amodio was waiting in the wings.  While we knew he was a strong player who had built a modest winning streak at the end of the 2020-21 season we had no idea that he was going to continue his streak into October, eclipsing James Holzhauer’s consecutive games streak and now entrenching himself as one of the top three players in the show’s history.  As of this writing, he is closing in on $1.5 million in winnings and while still at less than half the number of consecutive wins of GOAT Ken Jennings his streak is now reaching mythical levels and has reignited the show’s flagging ratings.  The most recently available rated week saw the show climb back to a 5.4 national HH rating–a +32% improvement from its lowest-rated original week this past week–and a return to its #1 ranking among all syndicated TV series (OK, tied with Family Feud,but that show runs multiple times a day–more on that some other time).

At the helm of this for the moment is interim executive producer Michael Davies, and don’t think there isn’t a connection.  Game shows can’t be rigged, but they can be cast.  A good executive producer knows who he has to work with to book episodes and can tweak both competitive levels of expertise among the players and the material they are challenged with to allow champions with certain strengths to optimize their chances of winning.  In success, you have both drama and an evolving storyline, as well as a common rooting interest–everyone loves a winner, and if you fall in the legion of Amodio haters the fact you care enough to hate him is just as good as loving him, cuz you’re still watching. 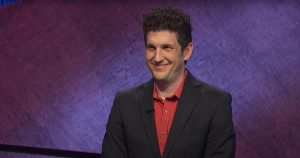 Davies was behind the U.S. launch of WHO WANTS TO BE A MILLIONAIRE in 1999, which reached its zenith during the end of its second extended run when John Carpenter took home the grand prize.   He knew how to maximize the drama and “may” have made the higher-value questions ones that were a touch less cerebral to encourage the risk and ultimately the reward.  The result was genre-saving ratings and the cementing of Davies as the svengali of game show producers.

Amodio is a risk-taker like Holzhauer, regularly going toward the bottom of the board for higher-valued answers to amass an insurmountable lead.  His competitors are far more pedestrian, and perhaps a bit less generalist in their knowledge base.The end result are games that are rarely competitive and instead become showcases for Amodio’s prowess and, ultimately, an increasing willingness to go all in to break personal daily winnings highs and accelerate his assault on Jennings’ records.  On Tuesday night, that combination produced an $83,000 payday, one of the best single-day performances in the show’s history.

Here we are roughly a month from the stench of Richards and once again Jeopardy! is in the headlines, only this time with the search for a permanent host back-burnered–even the controversy regarding Mayim Bialik’s tweets is dormant.  It’s all about the appeal of Amodio, the renewed interest in the show and, once again, the inexorable fact that at a time when the majority of linear television viewing is down, Jeopardy! is up and relevant again.

The same Sony executives who have been called out for the enabling and incredible botching of l’affaire Richards should be commended for bringing in Davies and orchestrating this run to bring the conversation back to the show and the franchise itself.  One that may even exceed $80 million in profits this year if this keeps up, and at this point there’s no reason to believe it won’t.  At a time when our world is arguably getting scarier than ever with an uncertain winter ahead, Amodio and his nightly reminder of why this show deserves so much attention is a welcome respite not only from its own internal chaos but from the chaos of our lives.  I’m watching, and I sure hope you are, too.