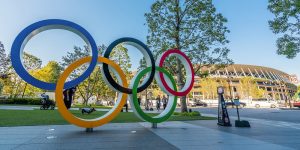 After a year’s delay and more snags than Totie Fields’ panty hose (Google it, anyone born after 1970), the 2020 Summer Olympics are history. Much has been written about the myraid problems and challenges these star-crossed Games have endured, from the staging without crowds to the mental anguish of numerous competitors to the complete or early ouster of highly touted participants to the politicizing of the results of those that did compete.

All of these factors, along with the advent of technology and the historically complex life conditions of this summer, contributed to a headline-making underperformance that, statistically, is in line with the decreases of several professional sports’ championship arcs in the last 13 months. Preliminary estimates have NBC’s linear audience at roughly -40% below the ratings level of the 2016 Rio Games, which would be consistent with the downticks seen by the likes of the 2020 Stanley Cup finals, The Masters and the Kentucky Derby,–major events shifted off clock by the pandemic by months, if not the year, that were these 2020 Games held in 2021.

NBC Universal has attempted to spin these numbers as positively as possible, which is no different than how any media publicity machine chooses to accentuate the positive. What is different is how they are telling the story. With almost no actual positive trend on the network level to offer, NBCU is emphasizing metrics such as streaming minutes for Peacock as evidence that, in the “big picture”, the Games achieved corporate expectations. There is no question that in the hyper-competitive world of streaming service launches, these games were a crucial opportunity for Peacock to achieve at least water level versus its far more successful competitors such as Disney, Discovery and Paramount Plus (though it is our observation that it’s still ahead of today’s audience for Password Plus–Google that one, too).  One metric being touted by NBCU Sports honcho Pete Bevacqua is that Peacock saw 5.5 billion minutes of Olympic viewing across the 16 days of the Games.   That’s a really big number.  Oooh.

But in advanced Leblanguage, spin that sounds massive can be, well, much less so, when one parses it down.  Witness:

–While Peacock is ecstatic that, per Variety, they have nearly doubled the number of subscribers since Memorial Day, current estimates from the same source put their current penetration level at  roughly 3 million households–less than 3 per cent of U.S. TV households.  (Yes, THAT’S where the gold medal men’s basketball game aired live; yet another self-inflicted obstacle to NBC’s viewing opportunity).

— Multiplying the potential viewing minutes by that subscription value, then factoring it back down to time, that means that across those two weeks the average subscribing household watched for TWO HOURS AND SEVENTEEN MINUTES.  13 1/2 MINUTES A DAY.

Yes, we know that not everyone who subscribed to Peacock watched at all–heck, on average roughly 97 per cent of anyone with the ability to watch NBC’s coverage in prime time did not.  The average viewer was slightly more engaged and, per the same spin doctors, more favorably disposed to the advertising they were exposted to than not.  Per the embattled Mr. Bevacqua, that’s a gold medal for NBCU.

We would, in Leblanguage, call, ahem, bullshit.

If anyone thought anything could demonstrate the potential that a galvanizing global event can have on the media landscape in the midst of change and tragedy, as Olympic coverage has done many times before in the last few decades, those hopes have been obliterated by these performances.  Whether the reasons are political, social, technological or simply we’re too obsessed with staying alive, these Games were a massive disappointment.   And the reality is that NBCU is smack dab in the middle of a $12 BILLION rights deal that gives them the chance to keep doing this for the next eleven years.

The first chance to right these wrongs, if possible, is less than eight months away, with another time zone-challenged set of games in Beijing this coming February.  By then Peacock may or may not be more available and relevant, and NBCU may yet figure out how to make more major events more readily available, the public more capable of knowing where these events are airing and, G-d willing, perhaps a more normal world and colder weather to help regenerate some of those lost audiences.   We’re not willing to bet on it.

If Mr. Bevacqua thinks six minutes a day and favorable qualitative sentiment qualifies as a gold medal, our view is that the Olympic flame has singed his brain.  Maybe a bronze.  Possibly no medal at all.  And a daunting road ahead to justify an investment that looms very likely to severly hurt the financial upside of Comcast for the next decade.

2 thoughts on “A Bronze–With An Asterisk”