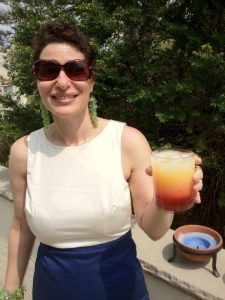 Way too many February 11ths ago I fell asleep watching THE NEWLYWED GAME while lying in a baby crib that was awaiting the impending birth of my mother’s second child.  As we often did in our cramped garden apartment, my parents would huddle by the working heater in their bedroom with them in their bed and me finding floor space to watch our reliable 12″ RCA black and white portable TV.  That floor space was being eaten up by the crib.   It looked comfy.  And it wasn’t a particularly good episode that night.

So I fell asleep.  In the crib. Despite my relative girth at the time, it somehow didn’t collapse.

When I woke up the next morning to the dim rays of a weak winter sunrise I saw a man and a woman in their bed.  It wasn’t them.  It was my mother’s parents.  My grandmother was already awake valiantly trying to finish the crossword puzzle my mother had been working the night before.  My mother’s parents were born in England and spoke with Cockney-ish accents.  Her eyes were wet with tears as she pondered the clues.  She finally saw my stunned stare when she looked up.  She then beamed and said good morning with four words that still ring in my head as the most beautiful quartet I had ever heard anyone speak in my young life: 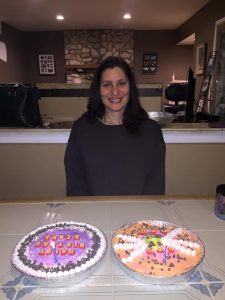 That was her way of telling me that soon after I dozed off my mother had gone into labor, they raced into a cab from upper Manhattan to Queens which they then handed off to my mom and dad, who then raced to Booth Memorial Hospital and, less than an hour after she arrived, my mother had given this world Debra Ann Leblang.  My days in that crib had come to an end.  I was no longer an only child.

A few days later my mom came home holding the most precious jewel of a living creature I had ever seen.  Her huge brown eyes looked exactly like mine.  As my mother came through the front door clasping her beswaddled treasure my sistah looked directly at me and silently expressed both her amazement and her appreciation at my now wet eyes as I stared back.  My exhausted mom placed her bassinet on our expensive living room coffee table, perhaps the only place in our apartment stable and worthy enough to hold it and went to lie down to catch a few less than 40 winks.

My sister stared at me.  I stared right back in amazement as she gurgled, smiled and stretched.  This pas-de-deux went on for about an hour.  Then she started to wail like a banshee.  Mom bolted from the bedroom, sniffed and said, “Well, it’s time you learned how to change a diaper.”.  I didn’t smell a thing.  Perhaps I was still in awe.  But Mom knew.  Mothers tend to be more sensitive to these kinds of things, I guess. 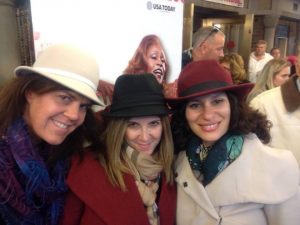 There’s a significant gap in age between my sister and I.  We never attended the same school nor shared the same social circles.  Truth be told, I didn’t have much of a social circle at all.  But she did.  While we share the same eyes and nose, fortunately for her metabolism that’s about the extent of the visible DNA we share.  So she was the popular cool kid, always being sought out by boys and always part of a loyal group of friends who had each other’s backs.

My mother adored her and did all she could to be a part of her life.  Frequently, my sister was embarrassed by my mother’s somewhat obsessive nature.  Her friends and boyfriends had to accept the fact that they would inevitably be grilled by the gravely-voiced chain smoking inquisiteur that was our mom.

I fondly recall one such incident when I visited as a young adult and slept in the living room.  My sister was in college, still living at home, and came home late at night with her boyfriend and her boyfriend’s friend and his date.  My mother infiltrated herself into the conversation, reaching for yet another of her damned too ubiquitous Marlboro 100s and probed her boyfriend’s friend about what he wanted to do with his life.  Turns out he was interested in acting and film-making.  Mom volunteered that “you should talk to my son; he’s a Hollywood big shot” (Hardly; but relative to her I guess I was).  She woke me up and said “Talk to your sister’s friend.  I’m gonna slice up an Entenmenn’s.” 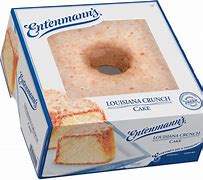 And that’s how I met Jon Favreau.  Unlike Cliff Clavin, I at least had one famous person in my kitchen.  (I sometimes wonder if his interpretation of Madame Mask may have been inspired in part by my Mom).

Mom wasn’t around much after that.  In fact, she died soon after my sister moved out.  We both met our first spouses not long after that.  We both wonder what it would been like had she still been around to meet them.  One of the few things we agree upon as adults is that for as tragic as it was to lose her that young, our respective spouses were better off knowing her memory than experiencing her reality. 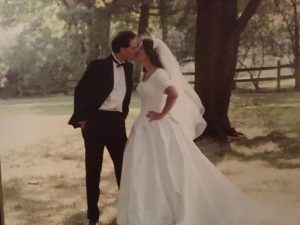 Unlike me, my sister had indeed found her soulmate with the guy she met at a Hamptons bar on a hot summer night not long after we buried our Mom.  She fought like hell for him and thank God the tenacity that she lives her life with was in full force, cuz he’s worth it.  He inspired her to be her best self and she gave up the media career I had convinced her to try to strike out on her own and become an attorney.  They married and she gave birth to her two children while she pursued her degree.  My favorite picture of her is the one where she is accepting her degree from Temple University, holding my toddler niece in one hand and her diploma in the other while she was pregnant with my nephew. Talk about multitasking.  I wish I had that picture to share with you.  (If someone reading this can supply a jpg, I promise to post it at a later date).

So today’s her birthday.  It’s a milestone one.  I’m not foolish enough to tell you all exactly which milestone it is.  I asked her what she wanted for her birthday.  She adamantly said “Save your money.  But if you want to give to charity, that would be a mitzvah”.  So, for a change, I didn’t argue with her.  I listened and obeyed, much like her kids and her elite creme colored lab do. 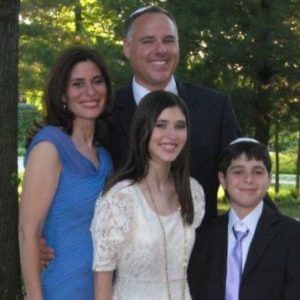 I just donated to the Susan G. Komen Foundation in her honor, one dollar for every year since she started staring at me.  I’m going to ask each of you who know her to do the same–perhaps two dollars per year if you can spare it.  (The link to their site is below).   If you don’t know her, give what you may choose. She has a particular reason for choosing this charity.  That’s her story, and I’ll let her tell it if, when and how she chooses.  She’s earned that right and I respect it.

I’m also giving her this heartfelt tribute to the extent it has value.  It’s a fraction of the gratitude I have for her entering my life and somehow still being a part of it.  So lift a glass of Foster’s or take a bite of pasta pesto in her honor today if you can.  But don’t you dare have a cup of coffee.  She doesn’t like coffee.  She rightly admonished me for not knowing it last year as my own journey unfolded.  I paid attention to her request. I hope I’m doing better now.

Happy birthday, Debra Leblang Allen.  Thank you for making the world a better place.  Keep on doing so.