Peter Bart: As U.S. Demographics Evolve, The Question Isn’t Where Is Hollywood’s Audience, But Who 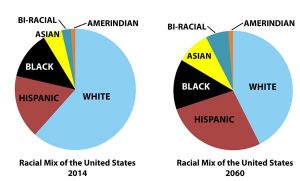 Peter Bart wrote a fascinating column for Deadline yesterday that brings to light some recent U.S. demographic tweaks that reveal some fascinating trends and could go a long way to answering recent questions about why media audiences continue to be in decline.  Having crossed paths with Peter on a long-ago failed pilot for a TV version of VARIETY! on which Peter, at the time its managing editor, was far and away the only credible contributor to an otherwise lame adaptation, proved Bartalian is far superior in rigorous honesty and ponderability than Leblanguage.

— The number of people who identify as multi-racial more than tripled between the 2010 and 2020 census reports.

— Interracial marriages jumped by 50% over 50 years.

— Racial minorities now make up a majority of the under-18 population.

— For the first time, the number of non-Hispanic white people has declined, falling by 2.6% to 57.8% of the population.

— Whites skew older (median age 44 compared with 35 for African Americans) and have fewer babies — hence domination in the teen category.

This corroborates other slightly older studies that project that the U.S. of forty years from now will be non-white dominant with significant growth in Hispanic, bi-racial and Asian sectors. Diversity appears to be on a collision course with inevitability that means America will be a rainbow nation.  While Bart’s insights lead to conclusions about why movies are failing to find traction for reasons perhaps beyond simply just pandemic-related hesitancy the implications of these facts relevant to the current debate on television audience declines are equally as signficant.

Cable news and family networks such as FOX News Channel, The Hallmark Channel and yes, even Newsmax, continue to post large total audiences and relative dominance relative to their platform.  But these tentpoles are distinctly older-skewing and non-diverse in appeal, de facto mirrors of their viewership.  They are the siren songs of the audience that is seeing their very relevance shrink.  These are the people that largely see Kamala Harris and Haitians at our borders as threats, not agents of change.  They drive the xenophobia that drives the ratings of passive free television,  Active paid television outlets, both linear and streaming, and more desirable advertiser demographics are reflective of rainbow nation appeal.

This week I have begun consulting for a client whose content reflects an audience appeal distinctly rainbow and is facing challenges in being credited with the viewership they believe they actually have.   There are technological and methodological biases inherent in the issue, but equally as central to the issue if the makeup of the people not being measured is diverse, they would naturally be negatively biased by measurement that doesn’t reflect that inclusion.  We intend to explain it in the hopes of simply being accurately represented and therefore capable of fair monetization. That is certainly the point Bartalian is making regarding the challenges of film studios in releasing content that has appeal to those who are still willing to set foot in a theatre.  Bart goes on to offer that Black Panther and Shang-Chi represent Marvel (and Disney’s) embracing of these demographic shifts and go a long way to explaining why Disney is winning the streaming war and continues to lead in global appeal for its content.

I’m hardly representative of the audience for whom this client’s content appeals, but my ability to understand who they are and why they need a voice will go a long way to communicating the disconnect and achieving our mutual monetization goals.  I embrace change, I don’t fear it.  Yet I also understand why the FOX News and Hallmark Channel viewer clings with equal passion to what they have.  Their chief challenge is their inability and antipathy toward something new.

To those who don’t embrace change let me offer this:  A year ago, I had no idea how to produce something like this.  I’ve learned enough about technology to be able to make this a regular morning habit.  I’ve met people and been places I never thought I’d live to see.  I’m rejuvenated and exhilirated and I’m finally being compensated for this passion.  I’m not yet inter-marrying or able to consider myself multi-racial, but I’m also not afraid of it.  If that helps our national divide just a smidge, I’m jazzed.

Maybe the issue with audience decline is not the fragility of the measurement service but rather the inability of many of those deciding what to show to appeal to those being measured by it.