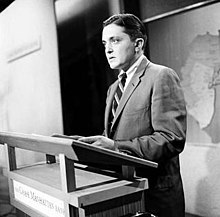 I grew up in a far different era of TV journalism, one where people actually reported news and commentary generally came from prepared speeches awkwardly read by management, particularly at local stations.  That’s because an overwhelming majority of news presenters were trusted figures, many with decades of experience which at the time went back to the dawn of the station. They were welcome guests, typically at the dinner hour or just before bedtime, presenting the events of the day with authority and clarity,  My family loved telling stories of WNBC reporter Gabe Pressman, who started with the station in 1957 and was still reporting 60 years later just before he passed away–at age 93.

Even when the likes of the more irreverent Eyewitness News formats became prevalent, its talent was familiar, its stations creating their brands via their personnel,  Every bit of qualitative research I would see from companies like Frank Magid and Smith-Geiger consistently confirmed this,  Stations’ value to their communities, and in many cases their ratings and profitability, were often defined by viewers’ perceptions and attachments to their talent.

So when I see items of late that indicate that within the next 10 days two more longtime Los Angeles TV news personalities, KNBC sports anchor Fred Roggin and KTTV morning co-host Tony McEwing, will be departing their respective stations after careers of 42 and 43 years, both close in age to me, it’s more than a bit chilling at the suddenness of these announcements, the emotional reactions of their younger colleagues, and the coldness of their employers in announcing their imminent departures. Roggin was a throwback to sports anchors who were true personalities who did a lot more than just the three to four minutes of each newscast they were given to read scores.  We’d eagerly await his “Roggin’s Heroes”, his monthly drumroll of highlights of odd and/or unexpected plays, some from obscure sports and outlets not typically covered in the daily reports.  Sure, it was a copycat of similar countdowns from his New York counterparts that were featured elsewhere on NBC shows, such as Marv Albert’s “Albert Achievement Awards” that David Letterman gave a national stage to, as did The Today Show with his successor Len Berman’s “Spanning The Globe” (with no less than Don Pardo introducing him!).  But it was Los Angeles’ own, successful enough to warrant a weekly half-hour which Universal TV, long before they became KNBC’s corporate sibling, syndicated to dozens of markets.  And Roggin was teamed in promos with Fritz Coleman, their longtime weatherman who also became a frequent performer at local comedy clubs and would incorporate his shtick into his forecasts.  “Fritz and Fred” dominated LA airwaves–and the demographic leadership of local news–during the height of the “must-see-TV” era.

But now, as Peacock expands both the reach and the platforming of local news, and NBC grows increasingly reliant on news to fill dozens of hours on its broadcast and cable networks as well as its streaming service, the personalities of the presenters are just as increasingly getting to be less defined and more homogeneous.  Few are veterans with reporting chops.  Most of their replacements come from smaller markets, with less botox, more diversity, and eager to inject their own thoughts through experience rather than clever video packaging.   Yes, I still watch (or listen) to a lot, but with a lot less frequency and devotion than I used to.    And based upon what I’ve seen in both actual rating and frequency, an awful lot of people who once watched KNBC seem to be feeling the same way. At FOX-owned KTTV, McEwing was the last remaining cog of the GOOD DAY LA franchise that rose to prominence, and eventual national distribution, with other strong personalities, including Steve Edwards, who, like Roggin, doubled as a local radio personality, and Jillian Barberie, a drop-dead bombshell purloined from Miami who the FOX honchos literally drooled over.  As a team with the slightly older and quirky Dorothy Lucey, with McEwing as the newsreader and fill-in, they became the kings and queens of Los Angeles morning TV during the late 90s and 2000s, all the more important since the national morning news shows were broadcsst on three hour delays.  After the station dropped both women in favor of younger and more diverse flavors of co-hosts, literally dressing each female anchor who represented a different ethnic background in a different color dress, and the aging Edwards was “me tood” off the air, McEwing was a trusted uncle, who we learned had a lot more in common with his fellow cast members than he was initially inclined to share.  When he lost his husband to misdiagnosed oral cancer in 2016, to whom he was only married for roughly a year though they were partners for decades,  his heartbreaking news and bravery to come out, particularly at FOX, endeared him to a new generation of viewers and colleagues.

Nor are these the only ones to leave of late, either in LA or elsewhere.  Just before Christmas Roggin’s longtime colleague Chuck Henry departed the station after more than three decades.  Henry is the quintessential LA anchor, square-jawed, earnest, and even emceed a couple of game shows.  And remember, KNBC was also the place where Pat Sajak did the weather before Coleman, and he’s done a little better with that genre.

And at roughly the same time, fans of one of the most-watched stations in the country, Philadelphia’s ABC-owned WPVI, saw the departure of its longtime anchor Jim Gardner after more thsn 40 years at the helm.  To many Philly natives, Gardner defined TV news and crossed eras much as Pressman did in my home.  And I’m certain that someone with Gardner’s stature and reputation likely owned your market, and your home’s loyalty, at one time as well.

Local stations continue to expand their newscasts, rebranding and repurposing them eagerly, because they essentially justify a station’s existence at a time when the very concept of a broadcast network is under scrutiny.  Companies that make their goals through retransmission consent still need distribution beyond streaming to reach scale,  Those with defined local content, often with established and popular talent at the anchor desk, have long given these stations leverage to favorably negotiate with cable and satellite providers.

Younger people simply don’t watch much locsl news.  They can get the facts anywhere, including from apps and smart speakers.  News networks are effectively opinion think tanks divided along political ideologies; what people call “news” is often tainted by advertorial status or the agendae of its ownership.  And based upon the demography of those that actually do watch, the quest for a new generation of viewers to match the new generation of presenters is simply not working.

Even “old farts” watch TV, and we buy products, and we can be switch-pitched.  We are not the same mentality of the generation of older folks now gone that brought us to these stations in the first place.  I’m both bemused and frustrated at the tone-deaf attitudes of managements that consistently seek out something new rather than at least sprinkle in some continuity.  There are exceptions, notably some of the CBS stations, particularly in Los Angeles.  But such exceptions are increasingly rare, particularly in smaller markets where newscasts aren’t even produced in the cities they serve.

“Efficiencies”, they call it.  I call it professional Russian roulette.

I’d love to think some entrepreneur with a “start up” might try and cobble together a site where veteran anchors like these can deliver stories and opinions aimed at the people that literally grew up with them.  On issues that mean something.  Perhaps AARP TV might try that, if they had the funds.  Or someone who could look at their pitch and see that I’m not completely nuts with such thoughts.  Think of the failure rate of so many youth-obsessed and COVID-driven digital businesses of late.   Think of the tens of thousands of unemployed millennials that by choice or enabling are now back living with their parents, who could tell them a thing or two about the impact these news personalities made on their lives.  Maybe, just maybe, some light bulb might go off in some latte-swilling slacker’s mind and realize that tapping into those loyalties might make a buck?

Maybe, just maybe, you could tap into my expertise, and those of many like me who will be sharing insights and expertise at next week Media Research Conference, too many of us “in between gigs”.  I’ll yet again offer you the chance to join us in person, and use my code for a discount. by clicking on the link below

Short of that, you can always click on what I politely ask from time to time because, yeah, there are sometimes dire consequences to premature departures.  It’s self-explanantory but, yep, I still need it.  Rent is due again soon, after all. That link is right below it.

Maybe one of these departing anchors, or someone with connections to them, could help us get the word out?  After all, they know how to report and connect.

And we’ll be more than likely still watching to see if their replacements can ever hold a candle to any of them.