I had every intention of following last night’s Emmy awards telecast with the diligence of the reporter I once aspired to be.  I fixed a healthy salmon salad, I settled into the recliner, and even found my way to the Peacock feed that allowed me to see the lame red carpet interviews in glorious 4K.

And then…nothing.  (I later learned a nearby transformer had blown, knocking out power in my building and the surrounding area for several hours; no doubt the inevtiable result of the oppressive heat wave we’ve been experiencing around here of late).

With A/C and fans inoperative, as I doomscrolled on my phone to see if I could get some clue as to what was going on, my reaction was predictable.  I fell asleep, awoken an hour and a half later when my roommate felt it necessary to wake me up with the burning question “do I have any idea when the power is coming back on?”  (No, friend, I’m not the DWP, and they apparently  don’t make a habit of updating their Twitter feed–their most recent post was from 2019). As it turned out, it was a blessing in disguise that I got to miss the alarmingly out-of-touch opening sketch that attempted to make Kenan Thompson a musical-variety star, as well as many of the other attempts at scripted comedy that not only pale to the achievements of the night’s nominees, but also made it increasingly clear that both the art  of writing and the appetite for a traditional awards show has all but evaporated.   My phone had dozens of alerts regarding who had won the awards, as well as instant reviews and social media compliations of what had already transpired. 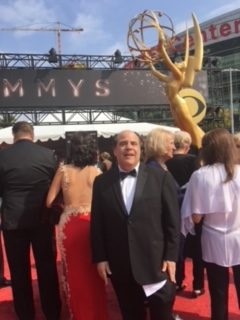 Once upon a time, I regularly attended Emmy awards in person, resplendent in my rented tuxedo , rubbing shoulders with the industry elite, often sharing crowded limos with higher-ranking executives who’d otherwise ignore me for most of the week.  As you can see, that was many pounds and hair follicles ago.  But as I groggily regained consciousness, I was reminded that so often when I’d be riding in the maze of traffic to the awards venue I’d be wishing I was anywhere but in that limo, sweating even though the A/C was on full blast, missing the last few minutes of the late football games.  This was particularly true when I was heading to my seventh or eighth Awards. I don’t want to sound ungrateful, but the first or second time something happens, it’s an event to be cherished.  I really loved the experiences, and I fondly remember those earlier awards, even if I had to tolerate an overexurbant salesman or two trying to pitch me reruns of HUNTER while following me to the bar.  Which is exactly why I am honestly thrilled for, and felt the joy even watching clips online, from the likes of Jennifer Coolidge and Sheryl Lee Ralph, who stole last night’s shows with their exuberant, unscripted acceptance speeches that earned both of these veteran talents the accolade they have deserved for decades, only now finally attached to “it” shows that put them on the radar of the voters who, so consistently, seem to reward only a scant few shows that they’ve actually watched. And therein lies yet another problem with the Emmys of today.  While there’s a hue and cry for diversity and more nominations than ever are handed out–perhaps to curry favor with the companies that pay the Academy for the privelage of telecasting and attending these events–there’s a remarkable sameness to the list of many winners.  As Daniel Fienberg wrote in this morning’s Hollywood Reporter:

Emmy voters are a complacent lot and the reality is that when the climax of your show is big repeats for Ted Lasso (comedy series), Succession (drama series, even though it’s a comedy), Last Week Tonight With John Oliver (variety talk series), Saturday Night Live (variety sketch series), Jason Sudeikis (comedy actor), Jean Smart (comedy actress) and Zendaya (drama actor), that’s just too much repetition for anything spontaneous to emerge. Even the limited series categories fell into the apparently unavoidable Emmy rut, as what initially felt like it was going to be a wide-open field instead became a string of victories for The White Lotus. So for every Quinta Brunson award that established a beachhead for a truly gifted breakout performer, there was a Jimmy Kimmel lying on the floor in a clearly scripted attempt to jazz things up.  Whoever dreamed this up–a Kimmel-loyal writer or perhaps Jimmy’s own ego–is proof positive why I strongly suspect many in attendance or watching last night probably were reacting exactly as I used to in the limo or last night as I faced the prospect of needing to retreat to my car for A/C and power.

May I offer the Academy a few tips?

Instead of elongating a ceremony that has become more detached from the mainstream network broadcast audience it theoretically covets–and will likely not reach enough of nonetheless–perhaps it’s time to revamp the approach to nights like this?  The most compelling and memorable moments are those where surprise winners are announced and, like Coolidge did, they make sure they’re not played off stage just to squeeze in another ill-fated sketch.

Why not simply just announce the winners, let them speak, and call it a night?  Offer that compressed ceremony to streamers exclusively, both with and without commercials.  Fill in the commercial breaks for those who can pay with clips of past winners, which you own the rights to do.  Celebrate the past with the actual recipients rather than some weed-inspired attempt to pay homage through badly written song and dance.  Maybe offer a more complete list of “In Memoriams”, which sadly becomes an ever-growing list and inevitably leaves people off?

And maybe instead of an expensive live stage show, perhaps borrow a page from the comedy of the show that is so continuously rewarded–SNL–and make some pre-produced digital shorts that can live on an Academy-branded FAST channel and/or YouTube page before and after the awards–you know, like Super Bowl commercials do?  Maybe release a few clips on Tik Tok?  If you don’t know how to do that, trust me, your interns do–and, believe me, they’re not watching the awards, and likely never will.

It was nice to see people dressed up and, for the most part, gathering en masse again–it was sorely missed for the last couple of years.  But the novelty has worn off, much as it did for me in those later, alienating limo rides.  The Emmys are about to turn 75.  It shouldn’t be thinking like the voters of that age bracket that are often the only ones who do enough homework so that their choices were well-informed.  Rather, it should be more focused on finding new ways to reach a new generation, and devote its limited funds to exploring the best ways to do so, rather than continuing to chase a past glory that is as out of reach these days than a linear audience of 20 million viewers. 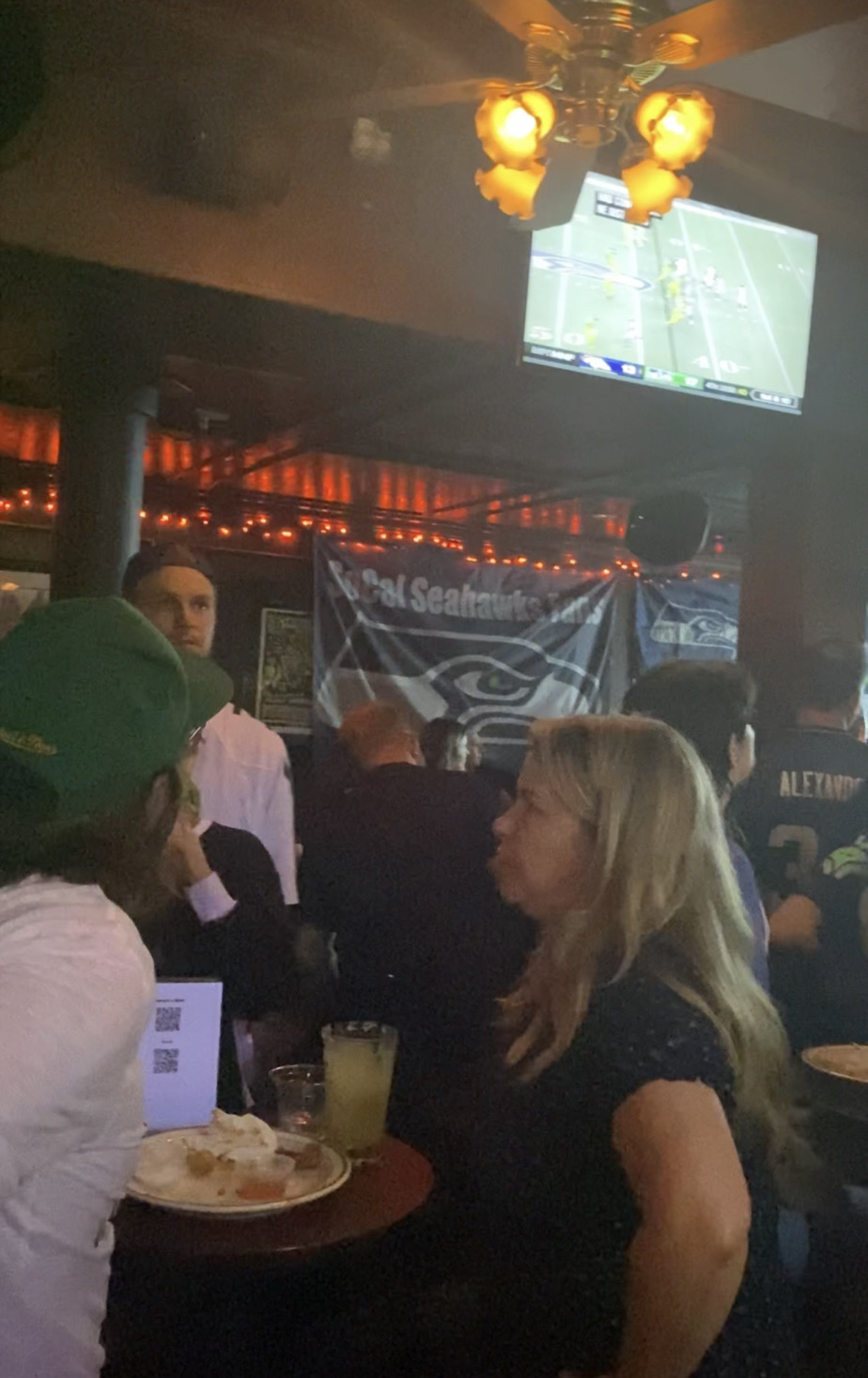 I got a lot more walking in last night than I had planned, I’m all caught up with the news, and I had the chance to make a new bunch of friends watching the end to a surprisingly exciting Monday Night Football game.   (Shameless plug: I’m writing about that on our sister site, thedoubleovertime.com today.  If NBC can shill a new Peacock series as part of the awards presentation, I can sneak in a plea for you to click over to my newer site).

I kind of hope some Academy member might read this and give my thoughts some consideration.  I think we both know what’s more likely to happen.  That’s even truer about the majority of what went down last night.  And I, for one, am actually glad the power went out.

Maybe it’s time for that to happen to those who produce the Emmys?