Forgive my “get off my lawn” attitude when it comes to revisionist history about game shows.  It seems that many alleged historians forget that many shows’ histories didn’t necessarily begin when they first became popular.  THE PRICE IS RIGHT’s current incarnation turned 50 this year; it was first established as a wildly popular, more sedate show that enjoyed a nine-year run in daytime and prime time between 1956 and 1965.  JEOPARDY! had a 11-year run as a lunchtime staple of housewives and politicians hosted by the dulcid Art Fleming before the more iconic Alex Trebek-hosted version began its current run in 1984. 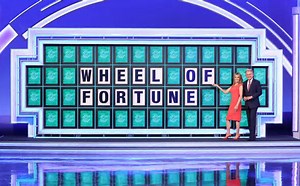 And JEOPARDY!’s syndication success wouldn’t have been possible without the meteroic rise to prominence that WHEEL OF FORTUNE had in first-run syndication the year before.  Yes, it’s that version’s 40th season, and it is being honored by its current producer and distributor,  Sony and CBS Media Ventures, with the designation WHEEL OF FORTUNE XL, with a new single-monitor supersized puzzle board prominently making its debut when new episodes begin on Monday night.  It seems every time the puzzle board evolves it’s huge news.  When the show first came to prominence, co-host Vanna White was an actual letter TURNER, gliding from side to side flipping over trilons that would light up with every correct letter guess.  In the 90s, the trilons were replaced by touch-screen monitors, which many snarkers debated didn’t need White’s touch to light up.  Now those monitors have been replaced by one super-sized screen that don’t even require a human to interact with.  But White’s still there, as is current host Pat Sajak, as they have been since 1983–and, frankly, both look pretty darn good. 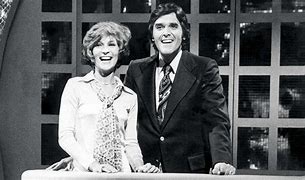 But they, as well as the show, were indeed around before that, and both had predecesors, as did Sony and CBSMV.  Merv Griffin had noodled around for years with a format that combined the game of Hangman with a way for winners to buy prizes with their cash rewards.  A much-maligned pilot called SHOPPERS’ BAZAAR, featuring a traditional roulette-style vertical wheel, was produced, with a young singer named Chuck Woolery as host.  When that pilot didn’t sell, the wheel was given more prominence in size and display, now on the floor and dominating the set, and an actor named Edd Byrnes, an early 60s icon as “Kookie” from 77 SUNSET STRIP, hosted.  Byrnes reportedly was drunk during the taping, so while the show, now called WHEEL OF FORTUNE, did finally sell to NBC (as part of an olive branch to Griffin after the original JEOPARDY! was shuttled around the schedule and eventuallyu purged) Woolery, a favorite of NBC daytime head Lin Bolen’s, returned, along with “his lovely co-host Susan Stafford”.

The original WHEEL was never a truly smash hit, as were the 70s versions of MATCH GAME and FAMILY FEUD, both of which grew to have nighttime versions produced for first-run syndication.  Several attempts were made by Griffin to give WHEEL its own weekly nighttime version during that era, but they were unable to find a distributor who could line up enough stations to make it worthwhile.  When FEUD grew to five nights a week in the early ’80s the playbook changed. 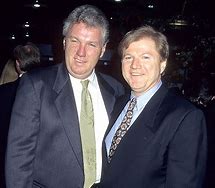 Enter three brothers named King, whose father ran a small syndication company out of the Jersey shore selling films of THE LITTLE RASCALS to TV stations.  The two younger brothers, Michael and Roger, acted as sub-distributors for the company that sold JOKER’S WILD and TIC TAC DOUGH to stations, so they knew something about game shows.  They wanted to strike out on their own when they saw those shows begin to decline in ratings.   By this point Griffin had replaced Woolery and Stafford with Sajak and White, and was desperately trying to find someone who would give a nighttime strip a chance.  WHEEL was still a middling performer, but it survived a purge by NBC head Fred Silverman in 1980 when David Letterman’s ill-fated daytime variety show was launched, and the new faces at least stablized the show’s performance.

What the King brothers, particularly the more detail-oriented Roger saw, was a track record where the show regularly “tentpoled” its lead-in and lead-out as a part of the overall NBC morning line-up.  In some markets the shares of audiences vs. lead-in and lead-out were small, in others more pronounced.  When it went head-to-head with THE PRICE IS RIGHT it often didn’t win its time slot.  But it consistently showed an ability to bring more people into its tent than not.

Knowing this, and taking full advantage of Griffin’s Don Quixote-like quest to expand WHEEL to a more profitable 10-episode-a-week enterprise, the Kings were able to secure rights to sell the show for a mere $50,000.  But they were a small company, and were still competing with JOKER and TIC TAC, as well as the far more successful FEUD.  At a time when barter wasn’t a factor, making the need to secure a national lineup moot, they went station by station trying to secure only the most opportunistic time slots.

I was working with a company that advised TV stations what shows rhey should purchase from distributors, an upstart in its own right as was King World.  Roger was a frequent visitor to our offices, and I had the chance to spend quite a bit of time with him as he waited for my bosses to finish up one of their typically elongated conference calls with clients (or, sometimes, the department head’s mother).  Roger lobbied many of our stations to buy the show, and I was copiously studying the trends that Roger would present to us in the hopes of securing our support.  I saw the same tentpoles that he did, and sometimes even saw some examples of how competitors in similar situations didn’t perform quite as well.  Roger liked that, and we forged a professional alliance.  Many of our clients were among the 40 stations who premiered WHEEL in September 1983–roughly a fifth of the markets where the show could run, but virtually all of them in significant time slots.

There were only 11 markets that received overnight ratings then, and in many cases data was only available to us in raw form.  It was laborious and time-consuming to sift through data transmission over a normal landline through a printer that almost always ran out of ink.  When the season began it often meant extremely early morning commutes for me and intense pressure to produce data that could be shared with our more demanding clients, as well as prepare for the inevitable daily call from Roger that would trumpet it.  But, much like WHO WANTS TO BE A MILLIONAIRE did years later, WHEEL premiered making significant improvements in the markets in which it was running, and showed continued, significant growth day-by-day.  It was exciting to see, and, as I learned, all too atypical.  We encouraged more of our stations to get on the bandwagon, and the Kings were only too happy to piggyback on our intel to expand.  The 40 cities from fall 1983 eventually almost quadrupled by year’s end, established King World as a major player and indeed paved the way for JEOPARDY! to successsfully return as its companion piece.

On the heels of this success, Griffin sold his company to Coca-Cola, which owned Columbia TV, which is how the production now resides with Sony. The Kings eventually sold their empire to CBS, which ultimately parted ways with Roger in an unceremonious way, one that eventually led Roger to commit suicide at age 63.  The show has survived all of this, and is still one of the most popular programs anywhere–network or syndication.

But it woudn’t be here today were it not for its earlier, more modest success, and that all started on January 6 (you read that date right), 1975.  The weekend after the original JEOPARDY! ended its own run on NBC.

So, yes, WHEEL should be celebrated for perseverance and endurance.  But please don’t call it WHEEL XL.  It’s WHEEL XLVIII, thank you very much.  And it’s still rolling.