The two-episode premiere of NBC’s “Night Court” reboot won the highest ratings for a comedy debut in over five years for the network. The first episode of the original series in 1984 was the highest-rated and most-watched program of the night, according to Nielsen, and the same was true nearly four decades later. The first episode of the night on Thursday averaged 7.4 total viewers, while the second delivered 6.7 million viewers.

BTW, that’s a 1.0 A 18-49 rating, which these days is in the neighborhood of unheard of when it comes to live-plus-same-day performances for a broadcast network comedy.

Though, in hindsight, I should have seen this coming.  By combining the right mix of nostalgia and evolution, reboots/newboots/revivals tap into a nerve that is as much biological as it is sociological.  My curiosity reignited, I came across this fascinating 2017 piece by Patrick Metzger for a site called THE PATTERNING, which describes itself as  “dedicated to identifying patterns in music, culture, and the Universe,”  In an article titled THE NOSTALGIA PENDULUM: A ROLLING 30-YEAR CYCLE OF POP CULTURE TRENDS, Metzger provides ample evidence for why, at a certain point in lifecycles, we should anticipate and even embrace success: There’s a reason that the culture of the 1980’s is experiencing a resurgence right now. Just as there’s a reason that we’re in the early days of getting more build-up of 90’s nostalgia. It’s not all that complicated, but it is a pattern that has profound consequences for how art is created, how we conceptualize culture, and perhaps even what sort of political rhetoric comes into vogue.

The pattern is this: pop culture is forever obsessed with a nostalgia pendulum that regularly resurfaces things from 30 years ago.

There are a number of reasons why the nostalgia pendulum shows up, but the driving factor seems to be that it takes about 30 years for a critical mass of people who were consumers of culture when they were young to become the creators of culture in their adulthood. The art and culture of their childhood (e.g. Teenage Mutant Ninja Turtle comics in 1984) helped them achieve comfort and clarity in their world, and so they make art that references that culture and may even exist wholly within that universe (e.g. the Teenage Mutant Ninja Turtles 2014 film reboot, 30 years later). Since most of the other fashionable creators around them also lived through the same period, they too indulge in the “new” nostalgic trend that’s being repurposed, creating a kind of feedback loop where all parties involved want to contribute more and more work that revives that same zeitgeist.

It can be explained equally well from the consumer side. After about 30 years, you’ve got a real market of people with disposable income who are nostalgic for their childhoods. So artists working in popular mediums are rewarded for making art that appeals to this audience.

Like many pop culture patterns, some aspects of this phenomenon are intentional, and some aspects are an organic product of the personal histories of the creators involved. Film studios and advertisers, for instance, often consciously use the nostalgia pendulum to build an audience’s emotional attachment with the release of something new. On the flip side, the writers and toy makers and musicians who are creating the artifacts of culture really do have fondness and nostalgia for the themes of their childhood that they’re referencing. So J.J. Abrams really was a kid during the summer of 1979 in which Super 8 is set. 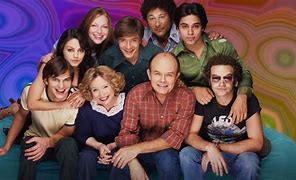 This theory, which Metzger backs up with an exhaustive analysis of more than 500 movies and TV shows’ popularity pendulums, also explains why THAT 70S SHOW was a rare sitcom hit for FOX when it was introduced in 1998, and successfully produced more than 200 episodes by the time it concluded eight years later.  And why the initial reviews and expectations for the reboot which Netflix is dropping today, THAT 90s SHOW, have been so well received.

Read the thoughts of Yahoo!’s Nick Hilton, and see if you don’t relate as well as I do (if not better, considering I’m not quite in the demo sweet spot):

I vividly remember, as a child, listening to Atomic Kitten’s hits “Eternal Flame” and “The Tide is High”, and my father loudly complaining that “all songs these days are covers”. Well, the child is father of the man, as William Wordsworth might say, and after seeing The Addams Family, Fresh Prince of Bel-Air, Sabrina the Teenage Witch and, now, That ’70s Show rebooted for modern audiences, I have become my father. “Why did you open our house to chaos?” asks Kurtwood Smith’s cantankerous grandpa, Red, as Netflix’s That ’90s Show begins. “Again!?” That, Red, is a question for the studio executives. And from all accounts, the question is answered when we first see Eric and Donna, now parents of an expectedly gorgeous teen girl named Leia (named, of course, for the Princess), bring their girl for an extended visit to their grandparents’ home–almost devoid of any updating– in Point Pleasant, Wisconsin, and Red gets to tell his kids, who inspired a new generation to revisit the concept of smoking circles (and, no, those weren’t tobacco cigarettes), “you’re upstairs people now”.  The studio audience (yes, some comedies still have them), whooped and hollered with joy, much as those who attended tapings of the original series did. The original series’ main characters, save for the uber-pothead played by Danny Masterson, who’s a little busy trying to avoid extended jail time these days, return, mostly for cameos, but the show spotlights a new generation of “downstairs people”.  And, truth be told, the Gen Z crowd that Leia and her friends represent is enamored with 90s culture in much the same way that their parents resonated with the 70s, and 70s kids did when HAPPY DAYS, another period comedy set in Wisconsin, became a megahot in that decade by revisiting the 50s.

If this formula sounds familiar for Netflix, it should.  FULLER HOUSE hit much the same notes with its successful run on the service, not only tapping into the memories from the now-aduits that literally grew up with the original but also familiar to younger viewers who followed its successful and ubiquitous runs in syndication and on cable networks,  THAT 70s SHOW, one of the few significant hits whose rights are controlled by an independent supplier (Carsey-Werner), has been sold and resold to literally dozens of outlets over the last two decades, and with that many episodes has often been a stopping point for many smoking circle participants of this century.  So yes, we’re familiar with Jackie and Kelso, Red and Kitty, and even Fez.   And now we get to spend some more quality time catching up with them, as well as our own youth. 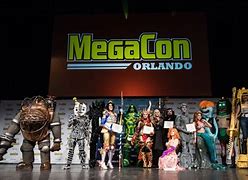 It’s no surprise that conventions celebrating these eras have as much popularity as they do.  Particularly in the tortured times we now exist in, the hue and cry for days where we had more runway in front of us than behind us are all the more desired.  MEGACON, an annual event which this year will be held in Orlando during, appropriately, April Fool’s Day weekend, will feature numerous celebrities and salutes to everything from movies and TV shows to anime series.  You know how I feel about in-person events, and yes, I’ve got a couple of personal connections to this one, so I’m providing a link for you below to register.  I can unequiovacably recommend you take whatever you might have thought to spend at, say, a studio-centered Orlando theme park and devote that amount to this convention and, definitely, DEFINITELY, spend a buck or two on the merch (and generously tip anyone who might be working those booths, BTW–they deserve it!).

I have a few special friends for whom the 90s was a particularly eventful era.  The world was their oyster, they received international acclaim, they had significantly larger bank accounts than they do now, and to say they were popular would be an understatement.  And if you happened to be born around this time, you’re exactly the audience that Netflix hopes will watch, and perhaps even be inclined to get your own password to access it because, let’s face it, at some point soon, you’re gonna be ready to move out of the basement (though, lately, statistics are showing that’s less likely than ever to be the case).

There’s ample time for all of that maturing to happen.  In the meantime, get your rolling papers handy, light up, and settle in for a 2020s-era binge of a show that has all the makings of a needed comedy hit for Netflix, and a welcome respite from all else that’s happening today.