In a media landscape where change is the norm, a remarkable milestone of stability is achieved today  The CBS daytime version of THE PRICE IS RIGHT begins its 50th season.

There are numerous examples of Leblanguage that can be invoked to describe exactly how incredible that statement is.  Try this one out: The first half-hour of the show (yes, Nielsen still measures the show’s two parts separately for those who still buy advertising by ratings) is regularly the highest-rated daytime network program among women 18-49.  In other words, as of today it is older than every single member of its target demographic’s audience.  It has officially transcended its knee-jerk perception of “the show I watched with my grandmother” and become indigenous to an entirely new generation of viewers.

The fact so many of us watched the show with a grandparent at some point is one of the many reasons why this program remains so popular.  Indeed, many of us old enough to be grandparents today grew up watching it with OUR grandparents.  This is actually the 65th year that the show has existed; it had an impressive run both daytime and nighttime beginning in 1956, vaunting the incomparable Bill Cullen to iconic media personality status. 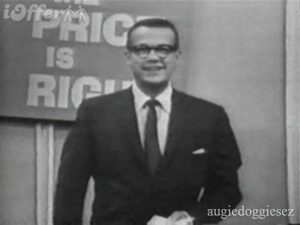 The current version initially made Bob Barker a legend and has now made Drew Carey more memorable as an emcee than as a comedian.  It has survived the misogny of both Barker and Mike Richards.  It has outlasted eight presidents , Vietnam, two Iraqs and Afghanistan.  It started as a compliment to Mike Douglas and will outlast Ellen DeGeneres.  It is arguably the most bulletproof and playable format ever created, and more than almost any piece of content has the ability to bring generations of people together to communally ask a very simple question–how much do you think this costs?

It is a skill set that every competent person possesses.  There is no book knowledge required.  There is no dress code for audience members.  For its first 48 seasons the only requirement to become a contestant was to simply show up for a taping; that ritual alone bringing together fans from all over the world to wait in overnight lines outside CBS Television City in the hope of converting a bus or plane ticket into 10 minutes of fame to perhaps drive home in–“a new car!!!!”.

In our challenged times the definition of “come on down” was modified; last season the show taped without a studio audience and its set reconfingured to a socially distanced contestants’ row where pre-selected contestants effectively”Came on out”.  One of the most jarring differences in watching last year’s episodes was the lack of hundreds of people shouting out their preferences for which digit to pick in “Any Number” or any of the many other games where de facto coin flips determine who wins or loses their share of a “fortune of fabulous prizes”.  The three losing contestants in Contestants’ Row did their best to become consults and fans with remarkable sportsmanship, but many of the games where audience involvement would add to and drag out the decisions of various pricing games was noticeably absent.  And that’s important because those audience members act as the home viewers’ avatars, because we’re doing the same thing.

The bonding we had with our grandparents or our babysitters or just our own minds was because everyone is capable of guessing numbers.  For a genre that defines success as playability, THE PRICE IS RIGHT is the gold standard.  The momentary adrenaline rush of being right is something we’ve all craved and often been rewarded with.  It is, in our opinion, the core reason we have watched for a half-century.

Today the show returns with a reinvigorated set, special anniversary pricing games, and yes, a smaller but still significant studio audience, separated by attractive pods that place pre-selected potential contestants and their friends and family far enough apart from competitors to be socially responsible but close enough together to likely rejuvenate the sterility of last season.  I personally can’t wait to see it.

Let’s not forget that this also begins Drew Carey’s 15th season as host; he has eclipsed Cullen as the most-enduring bespectacled emcee of the franchise.  I have embraced Drew more and more as a highly competent everyman whose traffic cop skills have improved markedly over the years.  George Gray may not be Johnny Olson or Rod Roddy but he, too, has become an integral part of the program; we rely upon his daily shout-out to “Mamma Mae” as much as we continue to be wary of “keeping our pets spayed and neutered”–an imploring started by animal activitist Barker that Carey continues today. 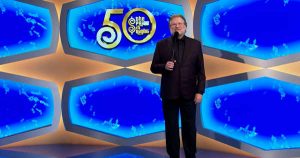 It should be a year-long party that will likely continue to unite generations and bring together millions of viewers, though many will not be watching CBS at 11 AM; they will watch on Paramount Plus when they choose.  We’ll continue to come on down.  And somewhere Grandma is still watching and playing along.  As will I.