If someone were to tell you that it was possible for you to measure your financial worth based upon how much others would WISH you would succeed, would you be running to take out a mortgage or a small business loan?

If somehow you still got financed and then later  you went back to the lender and said “I’d LIKE to pay you back on time, but I won’t necessarily be able to”, would you expect the lender would say “No problem, bro.  The fact you want to is enough for me?”

If that doesn’t make too much sense to you, you’ll likely be as despised as I am by the founder of an analytics company that, in the entirety of my career, is perhaps the most gratingly successful I’ve ever come across, and the fact I’m apparently one of the few experts who have realized how flawed their value propositon is one of the more personally frustrating facts of life I’ve been forced to deal with of late. 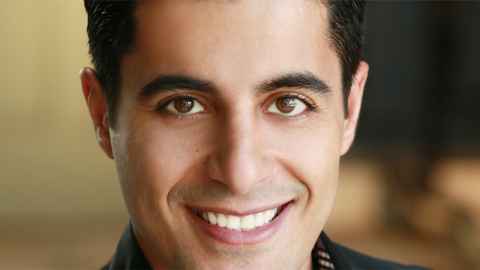 ared Seger launched Parrot Analytics nine years ago after raising over $8M from investors who were drawn to a technology he helpde develop shortly after he graduated with a Bachelor of Biomedical Science in neurobiology from a college in his native New Zealand.  Parrot uses a complex mashup of data derived from sconsumer research, streaming, downloads and search engine activity and to create a statistic they call “demand expressions”, effectively a measurement of interest in a piece of content or a talent.  As their website crows, “the company currently tracks more than a trillion expressions of demand in over 100 languages from 200+ countries to reveal what consumers engage with and watch the most across platforms”.

Now, mind you, I’m not so petty as to completely dismiss the validity nor the robustness of the data that they produce.  Nielsen, and even Netflix, should envy the breadth and depth of what they can produce, and in a far more accelerated timetable than either of them are capable or willing to provide publicly.  And for an industry desperate for some sort of empirical validation of their billion-dollar gambits, Parrot has emerged as a much-desired source of it.  Its client roster includes FOX, Warner Brothers and HBO.

So when the trade headlines screamed that Apple TV+ Can Boast A Higher Hit Rate Than Netflix, Despite Fewer Shows as it did yesterday, I naturally took note.  And sure enough, it was based on Demand Expressions.  It released this very pretty and detailed scatter plot that meticulously shows how Apple’s batting average was, in hindsight, far better than two of their broader-distributed rivals’, and much better than the one that laid off 450 employees in 2Q22: 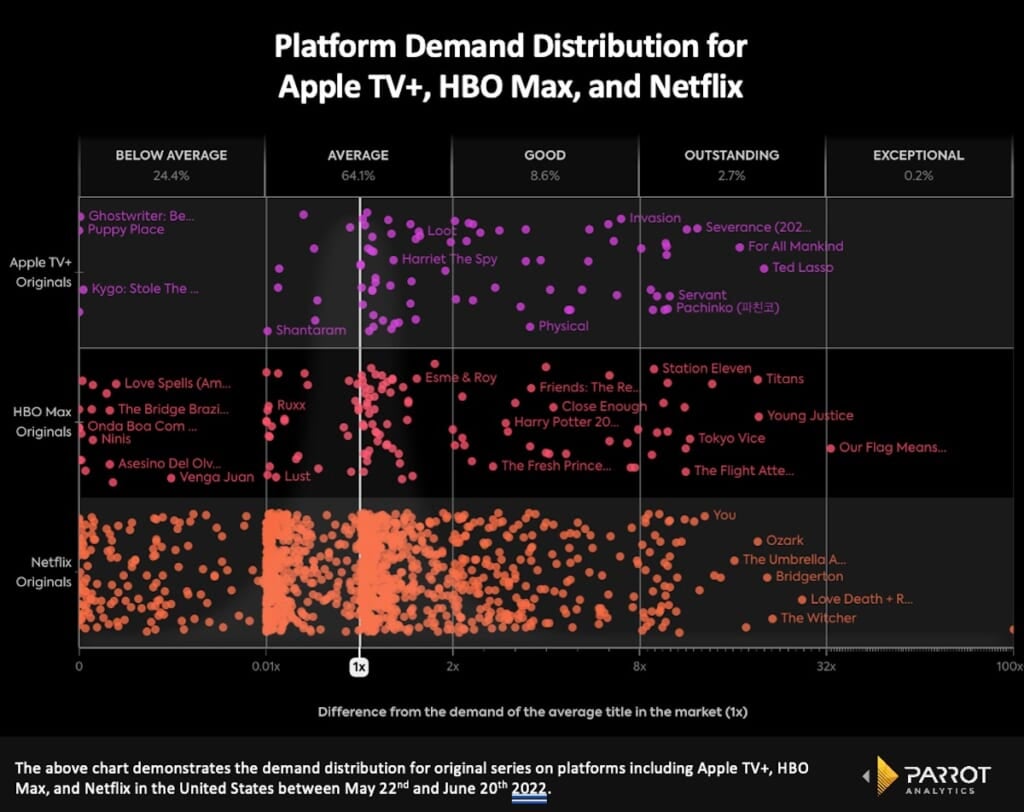 The article further went on to show this chart that underscored exactly how strong some of the Apple TV+ originals were relative to his averages.  In finance world terms, double-digit multiples based on a trillion data points sounds impressive. 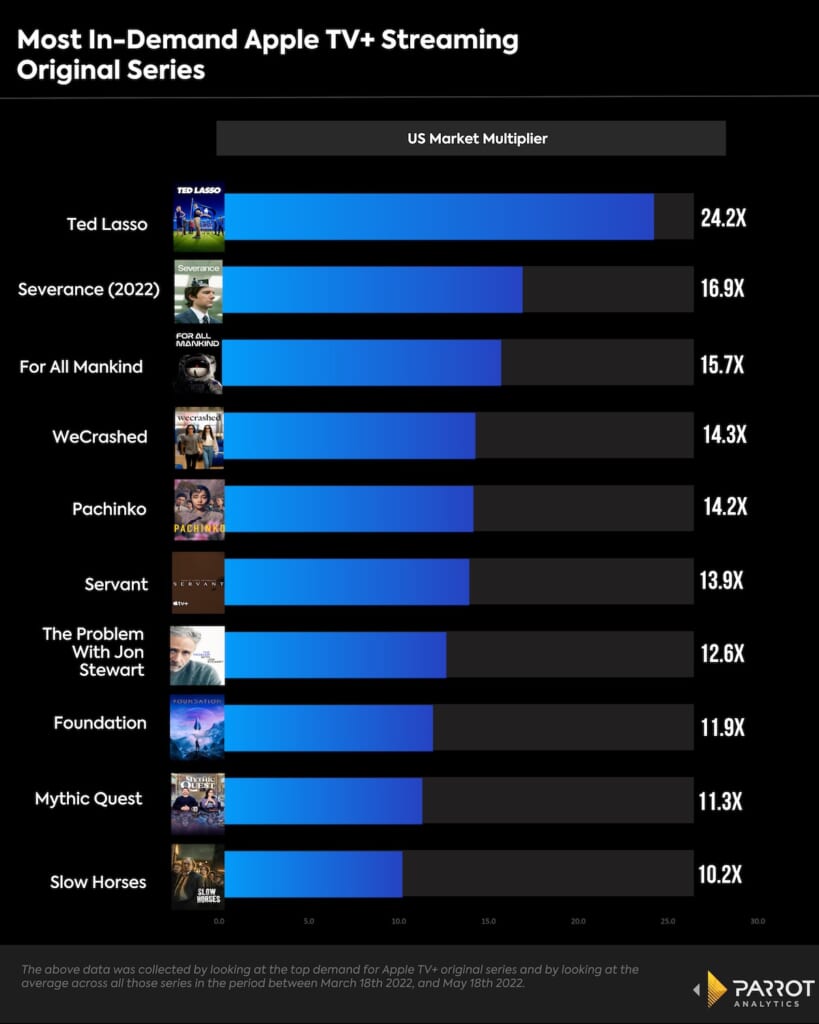 And yes, with the exception of the mini-series WeCrashed all of these Apple TV+ series have been renewed.  The issue is not in the what.  The issue I have is the WHY, and how Parrot uses their data to take credit  and how they choose to market it.

My brief dealings with Mr. Seger occurred during my later days with Sony, after he strongarmed his way over the heads of myself and my department superiors into the offices of the chairman of the studio and our division.  To their credit, these executives at least wanted our opinions before they’d commit any resources to Parrot–Sony is not a company that spends foolishly (the re-release of Morbius being a rare exception).

At the time, their data suggested tremendous upside for a series we were doing with WGN America, a struggling cable network being run by many of the executives I worked with at FX.  Indeed, that show punched well above its weight and overachieved the modest standards that WGN America had set for audience delivery.  But the problem was by the time Seger did his presentation we knew WGNA’s parent company was about to cut bait with that team and shows like ours. We knew that demand data wasn’t going to change that trajectory.  But apparently Mr. Seger was far too busy counting his millions to actually know much about the very business he was measuring.

I had opportunity to confront Mr. Seger at a social gathering he threw shortly after he made his big presentation to our masters.  Yes, I admit I’m a sucker for free mojitos and lobster street tacos.  Ever effervescent when I introduced myself as one of the execs he leapfrogged, he immediately went into pitch mode.  When I shared the realities that he was oblivious to, he sneered at me and exclaimed “You know, you’re like the parent we avoid when we’re in the basement having a rave.  Our data indicates your show should have worked.  You should go back to your team and let them know this”.

I stared back at Mr. Seger and said “I already did, Einstein.  They correctly pointed out that far too few of those who indicated they’d like to watch it actually did.”

His retort: “So will you recommend that your company join their more successful competitors in subscribing to Parrot”?

I shook my head and said “Not unless your fee is zero,  Because that’s what it’s worth to Sony”.

He sneered again, muttered something to the extent of “I hope you choke on your taco, you fat old fart” and moved on.

Well, they were tasty .

So forgive me, Mr. Seger, if I point out who the author of this Apple TV+ puff piece that was released yesterday was: 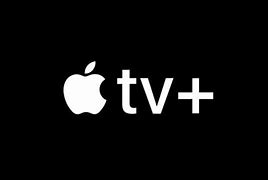 I know and respect the Apple TV+ team immensely.  You should know one of the WGN America executives who was let go despite your valuable data is now part of Apple TV+’s programming team.   So if you intend to monetize this new study with them, you might want to consider avoiding that executive along the way.
I know my voice these days is pretty insignificant.  I highly doubt anyone at Apple TV+ will read this or even respect my experience.  Lord knows they have lots more money to burn than did Sony.  Heck, they may even throw you a bone and subscribe to your data.  They subscribe to Nielsen, which isn’t anywhere near as positive as yours is about their content.
But they also have proprietary data that’s far more valuable and accurate than yours or Nielsen’s, and that’s what they use to determine what their potential is.  Yours, at best, is window dressing.  And as more and more companies with valid empirical data emerge, yours will become imminently more meaningless.
You were fortunate enough to get in at an early age, convincing enough to get a few big names on your roster, and you’ll probably cash out early enough to do it all again in another industry.  Honestly, I’m truly, truly jealous.
But you just might want to consider being a tad less of a prick to some of us who are savvy to how you’re doing it.
Hope your tacos go down easy.
Until next time…