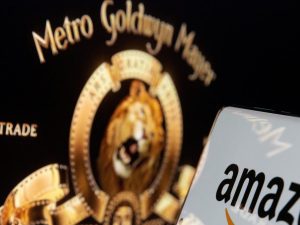 This week’s media bombshell was clearly Amazon swallowing MGM—for perspective, the price was roughly two-thirds of what they paid for Whole Foods, meaning an iconic Hollywood brand is inferior to organic cranberry tuna salad.  There’s a lot already written about how once again an arrogant tech company wants to impose its size and will on creatives—didn’t work out well for AT & T and Warner Brothers, did it?

The view here is more on the concept of how Amazon controls our most primal urges—instant gratification.  You want to see a movie?  Just say a title to Alexa and it will likely appear on your TV in a matter of seconds.  Want nosh with it?  Within two hours Whole Foods will deliver a cauliflower pizza and hummus.  Want to read the book the movie was based on?  One-click Kindle and you’ll have it in seconds.

And that, friends and viewers, gives an Amazon-fueled studio remarkable leverage in a digital-first, home-based entertainment environment.  Last year the Project Runway concept was updated for Prime Video with a series called Making the Cut, where fashion designs featured in the competition can be ordered on demand by telescoping out of the video and into the Amazon shopping environment.  It’s the epitome of impulse entertainment with our most base instinct—instant gratification.  For an advertiser or integration partner, that’s the holy grail—the ability to make a point-of-purchase sale in a virtual environment and know exactly which content provokes that purchase.  Now think of the creative possibilities.  A James Bond-inspired line of tuxedos and martini mixes?  Check.  A Rocky Balboa bobblehead?  Check check.  A Handmaid’s Tale fashion wimple?  Well…whatever floats your boat.  You get the idea.

Now factor In the executive who is currently spearheading this acquisition—Sony and FOX veteran Mike Hopkins—is also an executive who negotiated deals with the NFL for FOX and is sitting in the middle of pending negotiations for NFL Sunday Ticket that will be played out in the coming months.  When DirecTV made their groundbreaking deal they justified their record investment by rationalizing that hardcore football fans would leave or double-dip cable with satellite dishes.  Should our bold prediction play out and Amazon’s $1.7T market cap lure NFL ST to the VMPVD world there is as great a likelihood of more and broader cord-cutting, crippling both legacy distribution methods, as well as offering a compelling reason to adopt Prime Channels as a source for other networks and, in turn, Amazon’s ability to gain competitive equity for talent that much quicker.

Part of what makes this media gossip so fascinating is that more than ever the impossible is possible and we get to see it unfold in real time.  Never in the history of communication has this much change happened this quickly and forcefully.  We might be dead wrong, and you may have your own views.  As the summer plays out, it will be undoubtedly fascinating to watch.  And will provide many opportunities for Leblanguage to be used in spirited debate.  Enjoy the summer