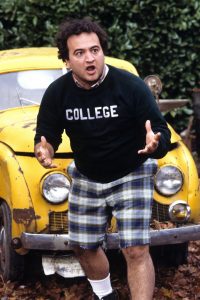 One of the most laugh-out loud scenes of Animal House is when Dean Wormer hands out grades to students and Bluto Blutarsky proudly revels in his “zero point zero” GPA.  On more than a few occasions last year many shows on the CW and on dozens of cable networks got the exact same overnight rating in adults 18-49, at least in the manner that ratings have been traditionally reported.

As we’ve discussed previously, there used to be a world where overnight ratings were highly anticipated, excitedly reported on and where competing networks would spin their own versions of what actually happened to highlight their niches of success (Upscale!  Households!  Growth!).  And reporting on these ratings in whole numbers, or even tenths, mattered, because it was simple to grasp when bragging in the commissary (We did an 8; they did a 6!!).

Bear in the mind the entire concept of ratings overnights were grounded in historic precedent through theatrical box office overnights.  The entire trade press industry was steeped in ticket sales for weekend premieres. As television ratings became more quickly available and since most networks and producers had ties to movies it was a natural evolution.

We have now devolved to where overnights are inconsequential; ad currency is sold on extended metrics both in time and platform.  In a streaming-centric pandemic-impaired world even box office overnights are now relatively moot.  And even when ratings are reported on they are so low, and the deltas between historic benchmarks so volatile, that even the process of trying to make news is equally moot.

See, that 0.3 could be as much a 0.34, and that 0.5 potentially as low as a 0.45.  In the least case scenario, that’s a +32% jump—still considerable statistically, but only a move just over a tenth of a rating point.  In the best case scenario, it could have been a jump from a 0.25 to a 0.54.  That’s more than double its premiere rating—a TRIPLE-DIGIT jump—and two and a half times the growth rate of the lesser case.  THAT could warrant immediate renewal.

Our point is that in a fractionalized and marginalized ratings world the whole concept of spin has been altered, likely irrevocably.   The data that used to matter no longer does.  What used to be a conduit for speaking Leblanguage is no more.  It’s all about long-tail viewing, and billions of minutes.  It’s about reach not average minute viewing.  It’s about more precise measurement and inexact science at once.  It’s about nuance.   A world where even a 0.0 is meaningful.

Bluto Blutarsky would have been proud.