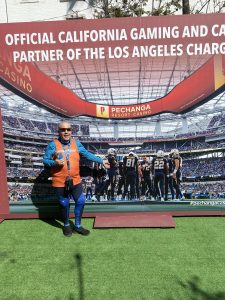 It’s Super Bowl Sunday, and here in balmy LA the sense of anticipation is none like I’ve ever witnessed before.  For only the second time in 56 years (but also the second time in two), a team that plays regular season games at the Super Bowl site will be contending for the ultimate sport’s ultimate prize.  The city is awash in Rams colors and pride, and I’m not ashamed to say I’m part of it.  The love is so complete and impartial that even the Chargers are rooting for their SoFi Stadium co-tenants, and shared signage and a block of the Santa Monica Third Street Promenade yesterday at a three-block long tailgate party sponsored by LA570 and KTLA5.  The Chargers, like me and an estimated 100 million-odd persons, will be fans today.  Naturally, I was there and naturally, I gravitated toward their booths first.

I love being a fan.  I love TV, movies, sports and people.  For decades. I’ve been blessed with the opportunity to earn a living and make an impact doing what I love far more often that what I must.  I’ve been to numerous sporting events (including two previous Super Bowls, plus three World Series), conventions, tapings, sets, premieres and private parties.  I’ve been really blessed.  I’m especially drawn to regular people with humble backgrounds who, like me, are living their dream as best as possible.  Plenty of athletes, performers and journalists that I’ve met are ones I especially cherish meeting, the more obscure the better for me.

Steven Albritton and I met yesterday.  He’s a news anchor at WLTW-TV Cincinnati, the NBC affiliate that will carry tonight’s game.  For Cincinnati Bengals fans and the media covering them, the atmosphere in Los Angeles is especially celebratory.  It’s more than 50 degrees warmer here than it will be today in Southern Ohio, and they haven’t been to a Super Bowl in 32 years.  So while he was standing at his station’s kiosk checking his phone awaiting a live shot, I had to go over and shake his hand.  I’m sure in Cincinnati he’s much more recognized than he was here.  I felt compelled to be an outlier.  We talked local TV, sports and the weather.  But his booth didn’t have swag, so I moved on. 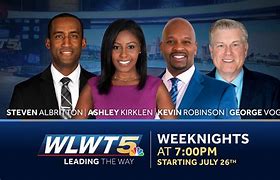 The fanfest gave out a tremendous amount of Rams and Chargers swag plus that of a few sponsors, plus plenty of venues selling official Super Bowl merch.  When I went to Super Bowl 43 I dropped several hundred dollars on shirts and hats, plus over ten grand on the experience.  I wouldn’t trade it for the world, even now.  But this year going in person is definitely not in my budget nor was it ever a realistic possibility.  I’m no longer in a position to get tickets as I was in the past.  But I could afford to get a new cap.  One for me, one for my roomie’s teenage son (Happy almost birthday, Luke).

I was in a fantastic mood.  Just being outside on a chamber of commerce day with happy people unafraid to hug, indifferent to masks, trusting and respecting judgement versus sheepishly obeying rapidly eroding draconian warnings of avoiding human contact, was exhilarating.   I was fully planning to end the night at a swanky Hollywood Super Bowl party filled with recording artists and hip young people that I had been invited to because I’m still on an invite list from Sony Music.   I then got an alert that a comedian I became a fan of was performing at a comedy club that night.  He was performing at a venue close to the club I planned to go to. I had never seen him perform live, so I figured I’d swing by, catch his act, and then head out for a night of potential debauchery with other fans. 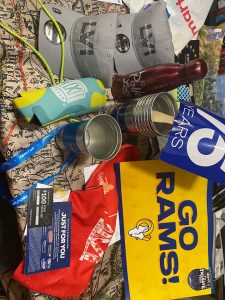 A little about him.   I initially started following him because he had turned up in my ex-roommate’s Instagram timeline.  You know that story and if you don’t yet, maybe it’s best we avoid the details now.  But he has a daily habit of morning walks, much like mine, where he tawks to his fans.  I often follow along, just two middle-aged schlemiels trying to be healthy while ambling through the streets.  His sense of humor, tinged with rigorous honesty and East Coast roots, is quite appealing.  I watched his videos.  He’s quite funny.  I dropped a couple of bucks on a ticket and risotto (He’s Italian, I had to).  I awaited his set.  He never got on stage.  I got up to go take a pee and intended to leave.

And then, right outside the men’s room, there he was, appropriately finishing a slab of ‘za.  I had to introduce myself.  He quizzically looked at me, then recognized me as a fan, and in his head made the connection I wished he hadn’t.  His first words: “What the hell happened between you and her”?

So I told him the basic details, as dispassionately as possible.  I told him how she impacted my life so deeply at a time when the world demanded isolation and, frustratingly, implausibly, still does at least in LA.   My only true obsession is to safely be out among other breathing human beings in person, and I never could have the strength, confidence, renewed health and even religious fervor I have today were it not for her.  I’ve long since given up the fantasy of any romance with her, tempting though it still is.  Frankly, I have even lovelier people in my life now.  And as he asked questions of me and heard me respond, it was clear he was definitely a good soul as well.

He asked the fatal question: “Do you want me to say anything to her?”.  I said, “It’s probably not appropriate.  But I would love to take a photo with you and if you’d send it to her I’d be grateful–but only if you’re comfortable doing so”.   Just say “Look who I met”.  Brace yourself for backlash.  But do let her know how badly I wish she’d simply let me say to her face how thankful I am for everything she ever has done, particularly for me.  I have closure with her friend, but not yet with her. “.

So here’s the picture. 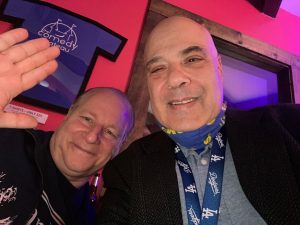 Handsome dudes, aren’t we?  I asked he send it to her along with a couple of recent posts where I shared a bit about her with y’all.  As my fans, I hope you’ll forgive my persistence.  I’ll ask this one be sent to.  Since today’s all about watching football as a fan, and because I’ve never enjoyed such an experience as much as I did with her and her friends, I’m missing her a bit more today.

I never did make the Hollywood party. When I drove by, the line to get was three blocks long.  I wasn’t going to stand around that long.  I had had enough human interaction for one day, and nothing could top the high I got just schmoozing with a cool dude who seemed to care about how what happened.  My night was complete.  I kept driving and got a decent couple of hours of sleep instead.

I honestly don’t know if he’ll honor my request or if she’ll even react. It might be better if she didn’t.  I know way too many people in my life believe that should be the case.  But, remember, I’m a fan.  Remember, I’ve rooted for the Mets, Jets and Knicks.  I know what it’s like to love and not get what you wish for.  And, ultimately, I’m her fan.  That alone should reinforce that she shouldn’t be in my life at all–after all, fans are in the audience and rarely interact with the talent.

Today’s a day to celebrate fandom.  In Cincinnati, since the game won’t likely end until well after 10 pm, tomorrow’s a school holiday.  It should be nationally.  We’re likely gonna overindulge just like Thanksgiving.  We get the day after that off after we watch football and eat.  Why not in this case?  Maybe too much to ask?

So here’s my hopes for today.  First, I’d love to see the Rams win (sorry, Mr.  Albritton).   Secondly, I’m hoping for a great game.  Thirdly, I hope I don’t burn food the way I did during the 49ers game when I got the three-word text.  And finally, I’ll wish I get a one-word text sometime today.  Grazie.  That’s really all I want.

If it leads to a coffee or a chicken parm for the three of us, that would be nice.   I’d even treat.  La Bruschetta or Little Toni’s.  You choose.