I’m not in the best of spirits today; I hope you’re doing better,  Suffice to say, I did a really dumb thing on the spur of the moment last night.  I tried to do to what I thought was the classy thing, and instead a reality check slapped me in the face–or in the heart, more accurately.  More on that later. 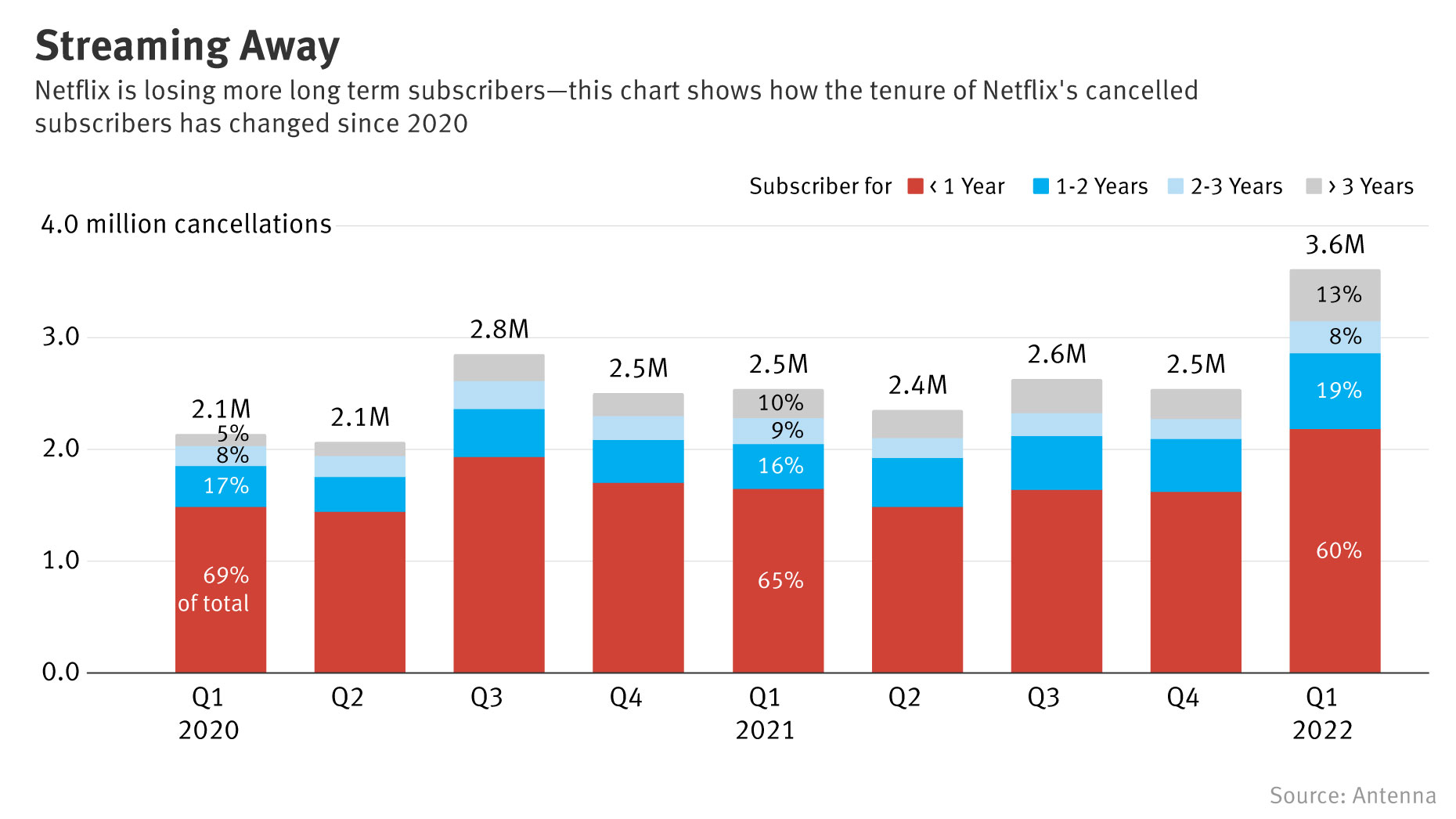 But at least when I make an error in judgment, most of the time I’m the only one who pays for it.  I shudder to think how many media and stock observers may have jumped to conclusions from an article in THE INFORMATION published last month, further amplified by a screaming headline from THE VERGE, a Vox Media-owned tech news website.  I dare say a lot more than one person was impacted by the sloppy analysis and journalism which I woke up to this morning after crying myself to sleep.

The normally reliable tech publications took some data provided by Antenna, an analytics firm which tracks information from a panel of 5 million Americans on their purchasing behavior surrounding streaming services, and concluded that Netflix’ much-trumpeted subscriber losses are coming from longer-term subscribers, which they define as people who have subscribed for three years or more.   The significance of that benchmark , of course, is that the explosion of AVOD competition began toward the end of that year, which also coincided with Netflix’s price hikes and content clawback of many of their more popular library series from their owners. 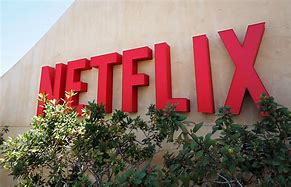 As this chart shows, cancellations from Netflix households who have subscribed for at least three years rose from 5% in 1Q20 (pre-pandemic) to 10% in 1Q21 to 13% in 1Q22.  The total number of cancellations rose from 2.1M to 3.6M over the same span.  Antenna supplies this data to subscribers quicker than the media reports it, including investment firms, so it is likely some of the coverage that reported Netflix’s global subscription decline was influenced by this.  Potentially, Netflix’s reaction, including numerous job cuts and a pivoting toward an ad-supported option which may result in an absorption of Roku, was driven by the decline in their valuation that accompanied their quarterly earnings report.

As the intrepid Ian McKee, the founder and CEO of Vuulr pointed out in a LinkedIn post:

Not sure if it is because I used to work at a data/Intelligence business (IRI) but these sloppy analysis pieces jump out at me as really misleading.

This “fact” is meaningless/misleading – if the % of their subscriber base that had subscribed for more than 3 years was more than 13% this fact would be a positive KPI – ie older subscribers were churning at a lower rate. Also remember, this is NOT 13% churn rate – it says that 13/100 people who churn are in this segment.

He’s spot on.  And I’ve got a few more observations.

The Information went on to supply early 2Q data from April and added the following fuel to the dumpster fire, as “reported” by Jessica Toondel:

Antenna’s data show that Netflix’s subscriber defections continued into the second quarter. In April, Netflix lost 612,000 subscribers while the rest of the streaming market gained 571,000, Antenna’s data show. Netflix’s most recent price hike took effect for new subscribers in January and for existing subscribers between February and April, suggesting a connection between the price increase and subscriber losses. The April defections mark Netflix’s second-highest month of subscriber losses since September 2020, when controversy emerged surrounding its show “Cuties,” which many alleged sexualized young girls.

As several more auspiced researchers pointed out, those figures do not necessarily represent a one-to-one ratio–in other words, how many of the 571K who subscribed to competitors were indeed part of the 612K Netflix defectors?  Was a cohort analysis possible and, if so, performed?  And, if so, did the research go into a qualitative phase that actually elicited the cause of their defection specific to that CUTIES controversy, or any other specific factor?

Maybe, just maybe, the defections occurred because people were losing their jobs, unable to work, at that point not able to be vaccinated and decided that once they saw TIGER KING Netflix was a luxury?

And to make matters worse, when Emma Roth reported on this story for their publication, she added the following in-depth insights:

Here at The Verge, a number of my colleagues who’ve been with Netflix for years have already given up their Netflix subscriptions or are at least considering it. Although I’m (admittedly) spoiled and get to mooch off a shared Netflix subscription, I don’t find myself watching it that much anymore due to its selection of shows and movies, some of which I can just as easily find on other services I subscribe to, like Hulu and Peacock. 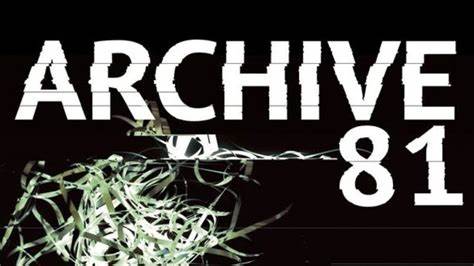 Not to mention that it canceled Archive 81 — and yes, I’m still mad about it — which was actually one of the few shows I enjoyed watching on Netflix.

Oh yes, Emma.  Your little focus group of, by your own words, spoiled moochers in Silicon Valley is definitely a representative sample.

At least when Netflix makes a programming decision, they used their own actual subscriber data to make those calls.  And believe me, Emma, they relied upon far more information than you did in your reporting.

Emma and Jessica probably haven’t been around as long as I have, so perhaps we should cut them some slack.  They’re hardly the first observers who have injected their own bias into numbers to fit a premeditated POV.  Lord knows I’ve dealt with countless executives who have demanded spin over substance and asked that I construct a narrative that supports their hypothesis.

So try this one on for size, Jessica:

According to the same chart you “exclusively” obtained, between 1Q21 and 1Q22 Netflix lost nearly 2.5x more subscribers (535K) who had subscribed for a year or kess than they did subscribers (218K) who had subscribed for three years or more.  And since we’re talking about actual, not relative, revenue when you deal in numbers versus percentages, the trend of newbies who opted out early is arguably more disturbing.  The Netflix of 1Q21 drew many new subscribers in via lockdown, As familiar titles migrated off the platform as the year rolled on, and new seasons of established originals were delayed to COVID, is it conceivable that the value proposition for newbies wasn’t as strong as those who were invested more long-term?

Perhaps.  But that’s just my take.  What do I know?  After all, you’re the one being paid for your take.

Besides, this is hardly a day I feel like crowing.  Last night I ran into someone I once knew by “accident”.  Perhaps I wanted the accident to happen.  In any event, I wasn’t up for the second drink of a two-drink minimum, so I sent the second drink over to this person as an olive branch in the pious hope it mighr evoke even a smile from a person whose friendship I once cherished.

This person sent back the tab the entire table of six they were with.

Dumbfounded and demoralized, I should have just walked out head in hand.

Instead, I paid it, in the even more foolish belief I somehow might get a thank you.

Of course, you know I did not.

Yes, I’m arguably a schmuck.  But I’ll at least admit it publicly even to people who could care less.  Again, I’m the only one I hurt by my behavior, and I still have enough shreds of faith to believe I’ll eventually recover.  It wasn’t a five-star restaurant.  My pride and heart will be damaged much longer than my debt load.  God knows other people have cost me far more.

I wonder if these reporters realize the implications of their decisions and have the possibilty of owning up to them as I just did.

Netlfix has problems, to be sure.  Acquiring Roku to service their ad business might be a step toward fixing it, since their existing infrastructure can be deployed quicker than anything even they can build out, and it’s already trusted by the buying community.  But if Roku does indeed listen to the siren’s song of an opportunistic buyout, many of their employees will likely be shedded as well.  Just ask people at Warner Discovery what the fallout of M&A looks like these days.

So, intrepid journalists, be really, really careful about what you write and how you write it.  Folks like Ian and, yes, myself are readily available to you for consult.  We’re not dinosaurs, we’re seasoned.  We’ve seen many of these rodeos before; some of us even rode in them.  Thinking before you act is sometimes a sound path to go down.

A really dear friend of mine reminded me of that reality last night as I sobbed softly recounting my stupidity.  Perhaps I’m admonishing said journalists because I need to remind myself of that reality more than they deserve to be.  I sure wish I had checked in with my friend last night before I whipped out my credit card.

Like I said, I’ll eventually recover.  I sure hope I can regain my good standing with that special friend.  I’m not sure tech reporters will be seen in as high regard by me anytime soon.  I personally know way too many people who stand to lose a lot more than me from mistakes like the ones they made than the one I did.

Let’s all resolve to be a little smarter thsi summer.