About five years ago or so I noticed a marked increase in traffic in a gentrifying part of Venice Beach which had been a preferred meditation spot of mine for years.  While I was griping that my little hideaway where I could always find free parking and a patch of sand and sun that would allow me a brief respite from the excuse for a life I was having at the time, I noticed that the cars were primarily hybrids and electrics, the drivers primarily young and attractive, and that many of them had bumper stickers, or even wraps, adorned with a weird blob-like logo on a bright yellow background.  When I asked who those self-promoting interlopers were, I was told “It’s those Snap employees.  They’re adding dozens each week, they don’t care if they’re in the office and they all love to be tan”.

And, indeed, at the time if you were between 12 and 24 the first app you’d open would be Snapchat.  While Facebook emphasized sharing digital images of fraying Polaroids from decades ago and Twitter pushed 140-character essays, clearly aiming at people closer to my age, Snap captured the spirit and imagination of a generation I had minimal understanding of.  But my niece and nephew were both in the heart of their demographic wheelhouse, and they were using it as their primary means of communication and expression.  So I downloaded it and trolled around, if for no other reason as to try and understand why it was so integral to their lives.

Snap was simply cool. You created avatars for yourself, rarely sharing your actual features.  The more detail-oriented you were, the better the likeness was.  Posts were even briefer than Twitter, often linking to video and/or posts from other platforms. 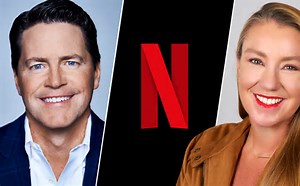 So yesterday’s news that it was laying off a fifth of its staff and was losing its two top sales executives, Peter Naylor and Jeremi Gorman, to Netflix’s fledgling advertising efforts was not only big breaking news, it was also a delineation point that the torch had been officially passed on coolness, regardless of what actual data reflected.  At first blush, Snap is a growing platform, at least according to Statista.  Its active daily usage figures have consecutively increased each quarter for the last three years, as of 2Q22 they average close to 350 million users per day.  That’s nearly +50% growth over that period, which is indeed a positive trajectory.

Naylor and Gorman were recruited to Snap from Hulu and Amazon, respectively, when those platforms went through growing pains and staff transitions in 2020, in an attempt to reverse the downward spiral that Snap was suffering through.  They brought respectability and a level of maturity that Evan Spiegel, Snap’s mercurial founder, rarely displayed as he built out his company with staffers who knew how to create buzz but not necessarily monetize it.

But while more people are indeed using Snap now then when they joined, the value of the company has plummeted markedly.  Per THE INFORMATION, Snap’s stock price has declined by -86% in the last twelve months. and while its usage is still competitive, Tik Tok has far and away become the platform of choice for teens and Gen Z, eclipsing more than a billion users monthly and, more importantly, establishing itself as the go-to social media destination.  By creating a culture where expression is now via microvideos where people customize their actual faces and voices with their moods of the moment, Snap is no longer cool.  They have been attempting to launch functionalities and features tied more to the metaverse than reality in attempts to reposition itself.

But as THE VERGE reported yesterday, “the teams that will make the deepest cuts include the team that’s working on integrations for third-party developers and Zenly, a location app Snap acquired in 2017″  And with the loss of Gorman and Naylor, Snap will also reorganize its sales team, though details are not available.  The stock price plummeted -6% yesterday alone with these revelations.

Whether or not Naylor and Gorman can meet the immense challenge and scrutiny of delivering on the massive expectations of Netflix as an ad-supported streamer will be fascinating to watch.   It’s still anybody’s guess exactly how many of its most viewed library series will be able to carry an ad load, and how much value they will be able to unlock with the popular originals they drop that will be adding millions of impressions to an already saturated market.  Yes, Netflix is currently still the most popular video destination, but it too is seeing an erosion of coolness from its peak.  Many of their most popular shows have been clawed back by the companies that licensed them, and now present large, proven alternatives to the Netflix value proposition.

And just because a platform can be sold doesn’t mean it can make money.  Whatever gains Snap was able to make with usage has been offset by its investment in still-to-emerge functionalities.  By necessity, Netflix is continuing to produce new content at a dizzying rate, and still continues to cancel underperformers with cutthroat approaches, producing numerous series with minimal traction and scale that will be part of the ecosystem their new sales executives will look to extract value from.  They may be new to advertisers, but they’re not new to viewers, and they’ve essentially already been rejected.

I wish these talented people well; all indications are they are exemplary at what they do.  But they couldn’t stop the economic bleeding nor the fade from coolness that Snap once had.  I was recently in that area of Venice and parking’s a lot more available that it was five years ago.  And it looks like it will be that much more so going forward.   Snap is simply not what it used to be, and the ominpresence of Tik Tok and, for that matter, a myriad of smaller competitors will make any renaissance far more difficult than it was to establish.

It’s a similar story with Netflix.  They may have recruited best in class to try, but bucking odds this large won’t necessarily be a snap.  So to speak.