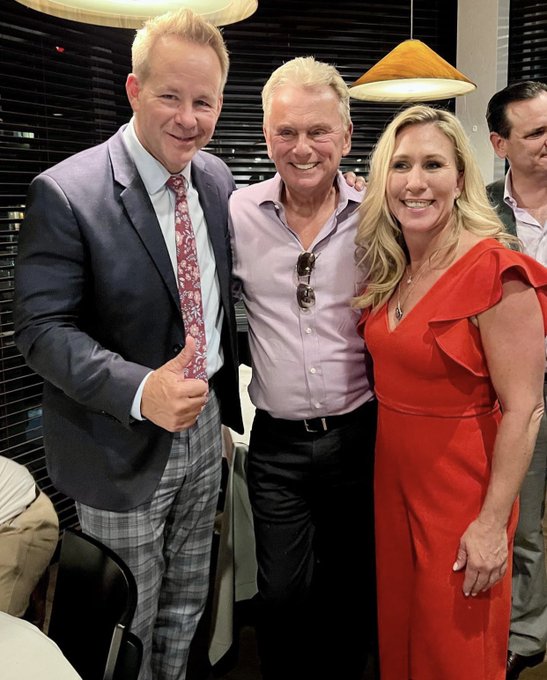 Social media has been abuzz with reaction to a picture recently released that depicts WHEEL OF FORTUNE emcee Pat Sajak with notorious congresswoman Marjorie Taylor Greene and a right-wing network TV host.  As Huff Post’s Ron Dicker reported, it has sent the snark-a-verse into overdrive:

Sajak has hinted at retiring soon after about four decades on the job, so TMZ theorized that perhaps he’s “letting it all hang out in public.” Sajak is a Republican who has advanced controversial views on climate change and serves on the board of a publishing house that has produced books from Rush Limbaugh and Ann Coulter, Newsweek noted.

In the image, Sajak poses between Greene and Right Side Broadcasting Network reporter Brian Glenn. Patriot Takes shared the picture on Saturday, though the watchdog of far-right political activity didn’t provide context. However, Glenn shared the image in late August and wrote then that the encounter happened at dinner the night before.

Of course the internet added its own context.

Hill was perhaps the most prominent tweeter whose reactions were captured by Dicker.  A Kenneth McGrath trumpeted “Wheel of Fascism!” . Jeremy Newberger tweeted a mock-up of the now defunct puzzle board with co-host Vanna White showing off this phrase: 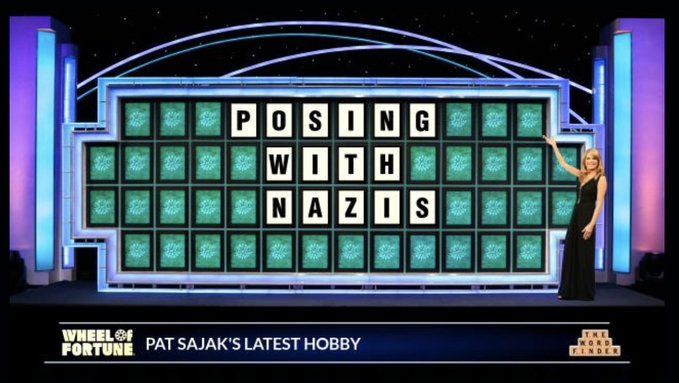 For as much time as I spend on social media, and often feel the need to react to certain issues important to me, I’ve never believed that someone’s personal political beliefs are worth the time nor effort to take a stand, no matter how many likes and clicks it might net me.  Sure, I thought of the Woolery connection.  Both he and Sajak are white men over 75, Woolery grew up in Kentucky, and Sajak cut his teeth as a weatherman at the NBC affiliate in Nashville before he moved to Los Angeles and became Merv Griffin’s lower-cost pawn in a salary showdown that cost Woolery that gig.

It wouldn’t be a leap of faith to suggest these gentlemen have spent a lot of time around people who watch FOX News.  And given the audience composition of WHEEL, it’s an equally strong likelihood that an awful lot of their past and current viewers do as well.

I honestly wonder when the last time one of these left-leaning internet trolls actually watched an episode of WHEEL, and whether the idle threats of those against at a gosh-darned PICTURE–without context–will actually impact the fate of the show, or for that matter Sajak’s employability. 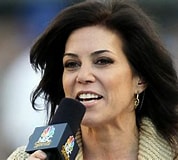 Well, I freely admit I watched an episode last week, eager to see the new puzzle board and the new wrinkles of their 40th–no, 48th–season.  Pat looked noticably older, freely eschewed the social distancing boundaries the show instituted over the past two seasons (which in itself had many of those overreacting on Twitter aghast as well) and phoned in a passable, but hardly memorable, hosting job.  Much as he did when our paths crossed 30 years when he sleptwalked his way through hosting a pilot for a TV version of VARIETY! which yours truly served as a production executive on.  Despite the name value of the magazine, as well as the presence of a young, brilliant associate producer named Michele Tafoya (she’s done a few other things since that pilot, too), the pilot was poorly received both with ratings and reviews and quickly faded into obscurity.   For my money, that sort of history matters more to me about my views on him than the events he attended this summer.

Pat’s got other interests as well, and some of them have hurt him more than his political beliefs.  He loves baseball, and that was one of the few things we could talk about as we attempted to get him to care about this pilot.  He invested in an independent baseball league that attempted to put a team at Long Beach State University over the summer, and reportedly lost millions in the process.  I dare say that matters to him more than what a few desperate, home-bound Tweeters think of who he chooses to take a picture with.

Sajak is in the first year of a new two-year deal that may eventually see he, and perhaps even Vanna, finally leave.  Unlike JEOPARDY!, which has benefitted from the attention and TLC that Sony has bestowed upon it as it has looked to rebound after the death of beloved host Alex Trebek, WHEEL has been almost an afterthought.  It consistently trails JEOPARDY! in ratings, has had little involvement from passionate producers like Michael Davies in building out its online presence and new wrinkles, and frankly is in need of a refresh beyond the puzzle board.

Here’s a thought.  Maybe if and when Greene is voted out of Congress she could replace Vanna as the show’s “letter-turner”?

Since she’s such a supporter of the good old days, she could be cast much like White was when her stint started–silent, striking a pose, and waving her arms for no good reason as a production assistant turned on light boxes for her to flip over wordlessly?

I hate to admit it, but she’s not a completely unattractive woman, and I’d much rather have a version of her that doesn’t say a word than the version that’s out there now.  I’m honestly not sure she can correctly identify what a vowel is, let alone implore someone to consider buying one.

And if you somehow take issue with that point of view, I don’t really care.  Nor should anyone else about what Pat Sajak thinks.  So long as he’s not injecting his viewpoints into the closing credit spiel, let his fate be determined by ratings and appeal, not by the empty opinions of people who should have better things to do than provide fodder for Huff Post articles.