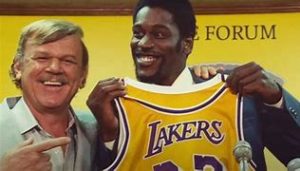 In the opening scene of the HBO series WINNING TIME that premiered last night, John C. Reilly, literally reincarnating Dr. Jerry Buss with his performance, exclaims “God damn!  Basketball!  It’s like great sex!”.  As the camera pans out, it’s revealed that he’s likely naked, in the Playboy mansion with a model curled up next to him in obvious post-coitus exhaustion, and he’s watching a basketball game on TV.   If he would have been eating a sandwich, he would have achieved George Costanza’s trifecta, though admittedly Buss’ bedmate was far more alluring than Susan Ross ever was. (RIP, Susan).

That epiphany is the mantra that drove the beginning of an era known as “Showtime”, so it’s more than ironic that HBO is the home for this series–hence the slightly altered title of the series based on Jeff Pearlman’s book.  With the typography and colors unabashedly purple and gold, the homage to the 80s Lakers is undeniable.  It’s a period piece, to be sure, but it’s a period that I passionately lived through and made me as passionate an NBA fan as I was a Mets fan and a football fan.

Consider that while the NBA was in the middle of expansion and had a championship franchise in New York at the start of the 70s, by the end of the decade the league was in disarray.  By absorbing the remnants of the ABA at a time that coincided with Julius Erving bailing out of New York, the inclusion of what was at the time perceived to be a cooler league with upside was handicapped by adding mid-size franchises with limited national appeal.  And the Knicks had deteriorated quickly after their second title, one they won over the Lakers a year after the Lakers won their first title in Los Angeles. 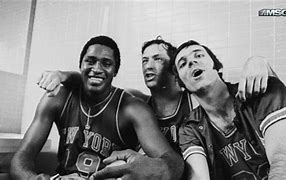 But the Lakers then fell on hard times themselves and were a mediocre team despite trading for arguably the game’s greatest player and hometown hero Kareem Abdul-Jabbar.  So the league was missing tentpoles in both top markets.  Franchises were relocating frequently.  CBS refused to air playoff games in prime time.  In New York, home games on TV were not available in the four outer boroughs.

As the premiere episode unfolds, it is those conditions that drove Dr. Jerry Buss to make a heavily leveraged offer to take the Lakers off the hands of an embittered Jack Kent Cooke, motivated by a nasty divorce to sell the team he loved and the Forum arena he built out of the rubble of Inglewood.  We learn that Buss had just over $100,000 in cash (though many millions in real estate, including the Chrysler Building).  But he saw something in the raw appeal of a game played by athletic men in tank tops and shorts sweating for 48 minutes in close contact.  For Buss, it was likely reminiscent of many of the nights he enjoyed at the Mansion, albeit with slightly smaller balls.

Now add to it the talent, youth and yes, sez appeal of Magic Johnson, who over the vehement objections of Jerry West was Buss’ choice with the top pick in the 1979 draft.  Johnson, along with Larry Bird, had combined that spring for a memorable NCAA championship game–on NBC in prime time–that ignited that tournament and laid the groundwork to what a nascent ESPN and an expanded field turned into March Madness.  Putting a tall, teenage Johnson into Los Angeles, with Buss as a champion, created a perfect storm that resulted in a tumultuous but immediate championship in his rookie season and the springboard for a transformational decade. 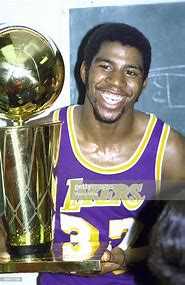 Jerry Buss comes across as an unlikely but clearly devoted father figure, mentor and friend, albeit not exactly the height of moral behavior.  We briefly meet a young Jeanie Buss in the opener, who is undeniably daddy’s little girl.  Jeanie is befriended by a disgruntled employee of Cooke’s, Claire Rothman, who is revealed to be one of the architects of the Laker Girls and the updating of the Laker environment into a natural extension of the epiphany Buss had in the Mansion.  Court-side seats for celebrity fans.  Hot looking cheerleaders.  Pulsating music.  It’s addictive and uplifting.  And it hooked me.

I first saw a game in the Forum from the top of the arena in early 1983.  The Lakers had just won the title.  Even from a distance the energy was way different than what I grew up with at Madison Square Garden.  If the Garden was the sport’s Mecca, the Forum was Caligula’s Palace.  And dear God, I loved it.  I disavowed the Knicks that night (a 135-120 loss to the Denver Nuggets) and fully embraced the Lakers, never to look back.  When I relocated two years later, the Lakers were about to enter the zenith of the Showtime era, and boy was I on board.

Recently, I’ve noted that I’ve also developed a passion for the Miami Heat.  The formula for their success is remarkably reminiscent of the 80s Lakers.  Get Pat Riley, a transformational player, a couple of his friends and make it a destination for hot fans to be seen.  The most attractive and wonderful people I’ve ever met are Heat fans.  So maybe I’ve developed a little wanderlust. But the Lakers got me to LOVE basketball, and love people who love it.

As for WINNING TIME, Reilly is one of many talented actors who morph into the cast of this real-life drama with dramatic license and prosthetics.   Some, like Michael Chiklis as Red Auerbach, are known quantities.  Many others, like the choices to play Magic, Kareem and West, were not.  I have a hunch they will be.  For a network like HBO, which has a pedigree in sports TV as impressive as their scripted portfolio, this was a natural convergence.  I know I’ll be watching.

1 thought on “Sex and Basketball”