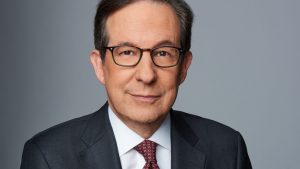 Yesterday’s announcement by FOX News Sunday anchor Chris Wallace that he was leaving the organization to join the fledgling CNN+ streaming service may have been shocking, but those familiar with the history of how an unencumbered Rupert Murdoch values traditional journalism would likely have deemed it inevitable.

Wallace, the son of legendary CBS News and 60 Minutes icon Mike Wallace, was one of the few current FOX News personalities with ties to traditional journalism, having an impressive run with NBC himself long with his pedigree.In recent weeks, as the emphasis on opinion from far-right provocautuers like Tucker Carlson and Laura Ingraham has intensified, several more moderate FOX News contributors like Stephen Hayes and Jonah Goldberg had already resigned.  Previously, longtime Murdoch loyalists like Shepherd Smith had already left the nest.  Wallace was frequently cited as one of the few examples in the FOX News family who had integrity and was exemplary of the “fair and balanced” tagline it continues to use.

But as Rupert, now 90, heads deeper into in his final act, once again solely focusing on his version of news without the counsel of trusted experienced allies like the late Roger Ailes or corporate encumbrances like 20th Century Fox his true colors and his core business values are becoming more obvious and, to the likes of Wallace, Hayes, and Goldberg, more abhorrent.

When Rupert first purchased the New York Post and made his presence known in the U.S. it was early 1977, I was commuting to New York City on a decrepit and crowded subway system and I had grown up in a tabloid-obsessed home.  The Post, an afternoon daily that regularly published updated editions throughout the day with later and later baseball line scores and race results, was a staple.  Occasionally the entire front or back page would change for late-breaking news (these days, that’s called an “alert”),  Depending upon when my mom or dad would return we’d often have three editions of the same day’s Post with different back pages.  They were compact, disposable and when we’d wrap fish there were lots of pages that didn’t need to be folded over like the broadsheets.  The New York Times, which only entered our apartment because my elementary school teachers implored us to subscribe, was to be read.  The Post was meant to be a companion.

So when Rupert took it over it was fascinating to see it evolve from the more mundane typography used under the urbane Dorothy Schiff into a carbon copy of the bold, red-and-black London tabloids like The Sun and News of the World that he championed across the pond.  The headlines screamed.  Fonts became larger and inkier.  Photos became gorier.  The “Summer of Sam” –the riots surrounding the summer blackout, the fear that David Berkowitz instilled in every coming-of-age disco-goer as I was, and the ongoing drama of the Billy Martin-George Steinbrenner-Reggie Jackson Yankees that, despite the chaos, produced the first World’s Championship for the Bronx Bombers in 15 years, were like oil to the fire that Murdoch fully intended to set on New York journalism.   The infamous headine you see next to this paragraph was perhaps his crowning creative acheivement to that end. 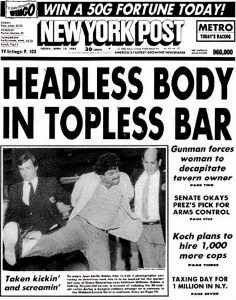 When Rupert purchased the Metromedia TV stations and FOX to ultimately start the network this headline was frequently used as the imagery of what was to come.  WNEW-TV became WNYW-TV, which eventually became FOX 5, and profitable reruns of M*A*S*H were sacrificed for the likes of the original tabloid TV magazine series A CURRENT AFFAIR.  While it had some success in New York it was still less popular than reruns and, by most who advised stations what they should program, dismissed as “the video Post–it would NEVER work outside of New York”.  I was tasked with proving that assessment wrong,

One of my first accomplishments was to convince Rupert that the show’s potential was best served by finding its way across the United States by being syndicated to stations already producing news rather than attenpt to place on the nascent FOX network being constructed for stations primarily devoted to programming to non-viewers.

Leblanguage was utilized to demonstrate that the majority of those who watched A CURRENT AFFAIR in New York were those who watched the 6 PM newscasts in competing stations. Local news viewers are typically deemed as more valuable advertising prospects because they tend to be wealthier and purchase more upscale products.  So even though there may have been fewer people watching ACA, they were in theory more valuable to Rupert.  He listened to yours truly, we launched the show successfully, ultimately having a healthy ten-year run, and I was rewarded with my first truly high-visible job scheduling his owned-and-operated sattions before my 30th birthday.

As FOX evolved and his attention to the launch of FOX News Channel took up more of his bandwidth the show and yours truly went away, came back, and then went away again.  Roger died.  He sold what he called “the middle of the paper”, and the FOX that exists now is essentially the News Media assets and the core stations he began with.

And as we know for his historically strongest supporters even the likes of Carlson and Ingraham aren’t far-right enough,  Newsmax, One America Network and the fledgling Trump Media and Technology Group are actively targeting FOX News’ most ardent viewers and making inroads.  So the likes of those with the pedigress of Chris Wallace are moving on, and Carlson is espousing “false flag” philosophy to help drive subscribers to FOX Nation, Rupert’s entry into direct-to-consumer media.  Wallace may be fleeing for greener and less incindiery pastures (Good God, yet ANOTHER streaming service with a PLUS sign?!?!?) but it is a certainty that he will be seen by fewer people.  Like ir or not, on any given weeknight more Americans watch Tucker Carlson than any other program on any measured television network in the country.

Say what you will about Murdoch.  Most of it is likely true.  Few in any form of media at any time in American history have been as influential, transcendent and accurate as he has been.  And it’s only get to get more competitive as we head into an incredibly contentious political winter.  You think the tornadoes in Kentucky have stirred things up?  We haven’t seen nothing yet.