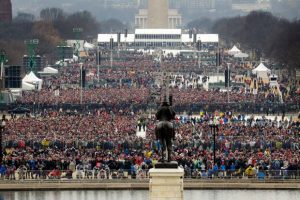 Incredibly, the intersection between the world of Leblanguage and the world of Donald Trump is larger than logic would otherwise dictate.  And I’ll offer that on many measures I could help him be better at what he tries to do.

Yesterday it was reported by The Young Turks, a progressive-skewing online news network, that the former president recently glowed over the size of the crowd that turned out for his speech  last January 6th, bragging to a sympatico reporter that “people keep saying it was the biggest crowd I had ever spoken before”. Given his first days on his onetime job were consumed with his desire to demonstrate that the crowd size that saw his inauguration was larger than Barack Obama’s, this certainly seems like an extension of an unrelenting obsession with audience size.

Well, many of those qualities are ones that are indigenous to success in media sales research.  Good researchers find ways to tell a story that will hopefully convince a potential client that their size and/or quality of their audience is, well, “huuuuge”.  Or at least huge enough to be considered worthy of an investment of part of their budget.  You use data and various ways of juxtaposing comparisons to benchmarks of time slot history, competitive set or U.S. population to make your case.

Historically, these comparisons were derived from publicly accessible third party measurers such as Nielsen, MRI, Comscore, Kantar and others.  In recent years, as streaming services and multiplatform media companies evolved, these third parties have become increasingly incapable of accuracy and growingly irrelevant to effective storytelling.  The most successful media brands use their perception of proprietary data to make occasional statements that justify their value proposition.  If it happens to actually be true, that’s secondary to whether or not your receptor believes it is.  Welcome to the Trump approach to research. 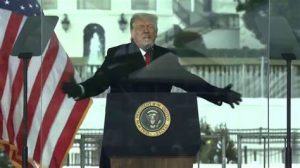 A colleague of mine at NBC once was responsible for calling Trump on Tuesday mornings with overnight ratings results on The Apprentice, a show he both starred in and produced.  At the time, the earliest ratings were from 56 larger markets, which typically would be listed in market size order on a summary sheet.  She’d read this list to Trump by phone, often when he was on his private plane.  He’d feign interest as the mediocre ratings from more competitive larger markets like New York, Los Angeles and San Francisco were rattled off.  About 20 markets in she’d hit St. Louis, where KSDK was one of NBC’s most successful affiliates at the time, and was often the highest individual market rating for The Apprentice and typically #1 in its time slot.  Only then would Trump become engaged, often yelling “Melania!!  Melania!!  Write this down!!”.  Yes, the future First Lady of the United States became a glorified secretary.

When Trump would do press for the series he unrelentingly pushed that the show was number one, even though nationally it rarely was.  In sales research your job is to push the most favorable narrative and gloss over any less compelling truths.   Welcome to the Trump approach to campaigning.

Tens of millions of people who voted for Trump believe he is being honest when he speaks, and believe what he says to support it is true.  When it’s the size of audience for a reality series or a rally that’s one thing.  When it’s how to treat coronavirus or the result of the election of the leader of the free world that’s another.  But the exact same principles applied in 2005 were used in 2016 and 2020 and what the Republican National Committee will likely use during next year’s midterms. 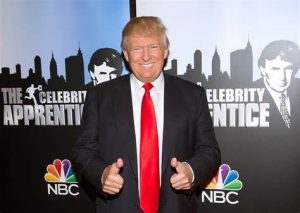 The RNC actually employs exceptional researchers.  Their use of Cambridge Analytica data and strategic targeting to help guide their last-minute reshaping of swing state votes that ultimately brought him the win.  The DNC utilized more outdated research tools from a company named Penn-Schoen-Berland, which was instrumental in electing Obama in 2008 but was less equipped for a world where landline phone penetration had diminished eight years later.  Cambridge targeted online behavior algorithmically and swayed many voters who either didn’t own land lines or would refuse to be included in such surveys.  The fact that Cambridge Analytica was shut down in 2018 (for the reasons why, I STRONGLY recommend the Netflix documentary THE GREAT HACK) is immaterial–its methodology still exists and it darn near swayed 2020’s results to Trump again.  We are quite aware of what he believes happened last November, and it with this background and support that his mindset and those of millions of his supporters–some of whom stormed the Capital in January–act accordingly.  Yes, the seeds of insurrection can be found in media sales research.

This is not a forum for political ideology debate.  I have my own strong feelings and will reserve them for myself, as I believe most others should do as well.  What I do know is that I’ve been hired by many moguls who wanted their story told credibly and effectively,often regardless of the broader stroke truths, and I’ve done just that for people even richer and more powerful than Trump.  I’ve been quite successful at it.   Good God I helped make people think Mr. Belvedere was worth running five days a week.  I suppose one could argue that inflicting Christopher Hewett mugging for the camera on weekday afternoons was almost as egregious an act as having people believe ultraviolet light was more effective than a vaccine.

In my world, “people may be saying” that it is hardly a badge of honor that I should be comparing my skill sets to those of Trump.  But let’s face it.  These skill sets have worked.  And they may work yet again.  After all, we’re both vaccinated Queens natives over 60 looking for our next full-time gig.  Just saying.

1 thought on “Of Trump And Research”