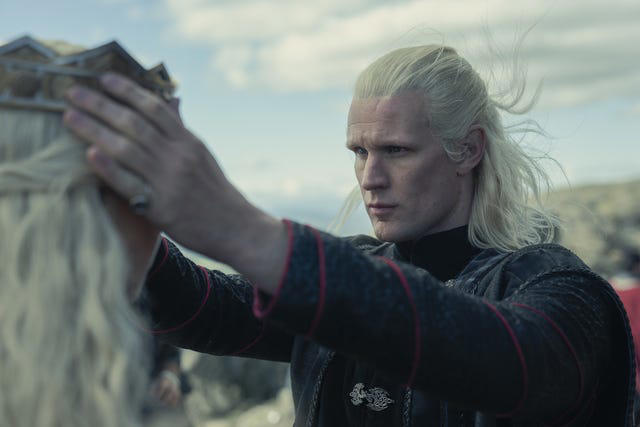 I’ll freely admit, I fall into the camp of those who lost interest in HOUSE OF THE DRAGON as its premiere season unfolded.  Like many of those who got caught up in the summer furor leading to its  much-awaited launch, a full ten days ahead of its arch-rival RINGS OF POWER, my initial eagerness was muted by the co-existence of that and ROP, not to mention some other compelling and popular releases such as Netflix’s DAHMER, as well as fall sports that included some exciting and, ultimately, emotionally draining baseball playoff action.

But, fortunately, I happen to live with someone who falls into the category of a Targaryen target viewer–someone who devoured GAME OF THRONES as eagerly and consistently as any dragon ever did, mythical or otherwise.  So I was hardly surprised that he made it a point to watch last night’s Season 1 finale on HBO MAX in its near-live window, and I made it a point to get caught up on the key plot points and, ultimately, his overall reaction.  Ler’s face it–a helluva lot of executives have often used their wives and children as internal focus group proxies for their tastes on content they otherwise aren’t all that familiar with.  Why should I be all that different all the time, right?

So, FWIW, he was satisfied with the episode, one that utlimately saw the first dragon-on-dragon battle and the revelations that kinda ruined the moment for one particular princess, as Bryan Alexander of USA TODAY recounted:

Life as queen turns out to be brutal for Rhaenyra Targaryen … 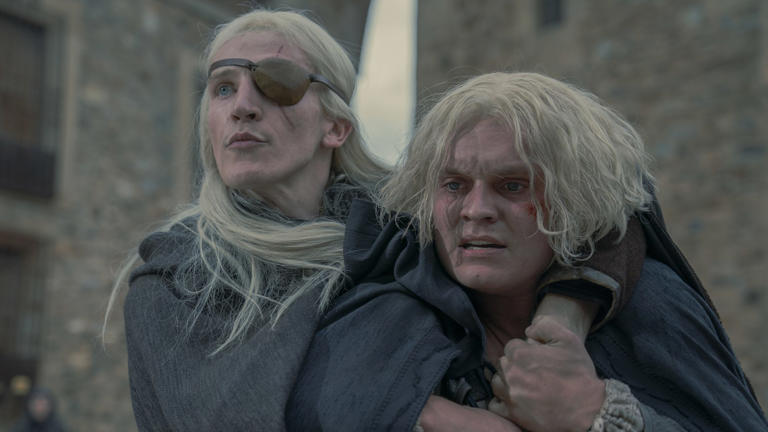 …In one dark day, Rhaenyra (Emma D’Arcy) is informed that her father King Viserys (Paddy Considine) is dead, and also that her one-time childhood BFF Queen Alicent Hightower (Olivia Cooke) has usurped the throne by crowning her reprehensible son Aegon II Targaryen (Tom Glynn-Carneyon) as king.

As a kicker, Rhaenyra is warned that the Hightowers are coming for her and her children. The traumatic news sends Rhaenyra, pregnant with her sixth child, into early labor and another devastating “House of the Dragon” birth scene.

Well, not only did it (expletive) happen, but once again there were fans around the world that simply could not wait for that said happening.   Much like it did during several episodes of the final GOT season three years ago, reports circulated Friday via VARIETY! that the episode had apparently been leaked.  Per an HBO spokesperson:

“We are aware that the tenth episode of ‘House of the Dragon’ has been posted on illegal torrent sites. It appears to have originated from a distribution partner in the EMEA region,” the full statement reads. “HBO is aggressively monitoring and pulling these copies from the internet. We’re disappointed that this unlawful action has disrupted the viewing experience for loyal fans of the show, who will get to see a pristine version of the episode when it premieres Sunday on HBO and HBO Max, where it will stream exclusively in 4K.”

This will, no doubt, call into question the accuracy and completeness of any viewership data that will be released, whether it’s immediate or as longer-tail consumption figures unfold.  The generally positive reviews and the appetite for future episodes that the cliffhangers unveiled last night produce may at some point get people like myself to eventually catch up.  That phenomenon, which is often called an “echo effect”, often occurs in the window that runs up to a new season’s premiere on a streaming service.  Exactly when that Season 2 drops is very much up in the air, as HBO ideally wants to claim a more ideal and open window than they had this time around.

If the final seasons of GAME OF THRONES are any barometer, that wait could be lengthy.  There was a 20-month gap between the last episode of the seven-episode Season 7 and the six-episode Season 8, and a return to the spring arc that the first six seasons had aired in after Season 7 ran in the summer of 2017.   Anticipation did build–the final season showed the rare trajectory of uptick from every season prior, and ultimately set the tone and, yes, the budget, for HOUSE OF THE DRAGON and other franchise extensions.

But the HBO world under the auspices of Warner Brothers Discovery is a far more fiscally challenged one that the one HOD was greenlit in, and while a second season was quickly ordered after the well-received (both creatively and viewership-wise) premiere, the balance of HOD’s first season was deemed uneven by many, including my in-home focus group of one, not to mention many, many others who regularly posted reviews and opinions, professional and layperson.  Several of the episodes leading up to last night were deemed dark in look and overly woke in content.  And since HBO management has chosen to be a lot less transparent with viewership data since the premiere, one would suspect that the news hasn’t been stellar.

And as this past weekend has shown, there are other franchises within the WBD world that are showing promise.  BLACK ADAM’s box office performance, particularly globally, was impressive, despite some mediocre critical reviews.  With a new DC Universe head being sought, and with the looming presence of a franchise extension incorporating Superman ahead, one could conclude that on the buzz pecking order, Targaryen comes in at best second in Burbank this morning.

One intriguing possibility for the release of Season 2 could be a proximity to the 2024 presidential election.  If the buildup to the midterms has any validity, Lord knows we could use the counterprogramming option.   And, by then, who knows what HBO or WBD will look like?  By then, the planned confluence of HBO Max and Discovery Plus should have been consummated, and it’s entirely possible additional consolidations (Peacock?  Comcast?) could have occurred.  Certainly, this title would be a critical chip to play down the road, whoever the high rollers at the table might be at the time.

As Rhaenyra gloomily intoned as the dragon battle neared, “War is here”.  She could have been just as easily been referring to the political storm clouds and/or the internal battle for more fiscally responsible future seasons for HOD, or even the other planned franchise extensions.  There’s still billions of dollars of debt that needs to be reckoned with, and we haven’t even seen any of the results on the overall health of streaming media that the upcoming challenges of ad-supported tiers of Disney Plus and Netflix might bring about.

My roommate’s antipication is high this morning, but unlike so many other executives, I won’t assume my focus group of one is representative and timeless.  I’ll strongly urge whoever is running WBD’s research and analysis these days to make sure they look at both incremental data and longterm chatter among catchup viewers to make the most informed decisions possible about when and how Season 2 will be sent into battle, and, of course, be extra careful about the potential of that impaxct being compromised by rogue distribution partners.  In a year as competitive as 2024 looms to be, who knows who might influence such a move?

And, as usual, if you need any help whatsoever, as of this moment I’m still available to help better plan your battle.  I’m ready for war.  Are you?