Mucho news yesterday about the fact that the broadcast networks, as well as the usual suspects of cable news networks and streaming services will carry the opening night of the January 6th committee hearings in primetime on Thursday night.  With rampant teasings of new revelations and video accompanying the announcements, the drumroll to the supposed smoking gun that will be unveiled around the country this week was touted as especially significant since these events will unfold in prime time.

Well, as any informed observer of media can attest, primetime, particularly broadcast network–heck, linear network primetime–is nowhere near as important in the viewership and consumption ecosystem as it used to be.   For the most recently completed 2021-22 season, television’s most-watched primetime show was the Paramount Network’s Yellowstone.  More weeks than not, the audience for the late Sunday afternoon “America’s Game” NFL telecast would dtaw more viewers than virtually every primetime broadcast-except, of course, Sunday Night Football.  Even in decline during a moribund season, Saturday Night Live ranked as one of the most-viewed entertainment series, particularly among adults 18-49.   A growing plurality of the viewership of series scheduled on broadcast networks in primetime occurs in time-shifting and on “supplemental” platforms.  So there’s a lot less luster to this daypart than there used to be.

And as far as congressional hearings, or for that matter any unfolding of a case before an actual or virtual jury, daytime has been the far more impactful daypart of choice both historically and recently. 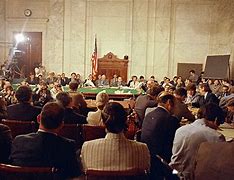 The Watergate hearings of the mid-70s disrupted network television for several summer weeka, drawing significantly larger audiences than, say, Another World or The $10,000 Pyramid could produce.  The O.J. Simpson trial coverage of 1994-95 established the very existence of Court TV and disrupted enough tv schedules as to ensure the early cancellation of a “new” version of The Price Is Right.  And, of course, in recent weeks the newest iteration of Court TV and its platforms attracted record (for them) audiences with the coverage of the Depp-Heard trial 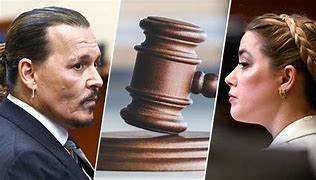 that placed the presence of feces in the national limelight, arguably a potential talking point for the narrative surrounding the damage done to the halls of Congress which will supposedly be retold as part of Thursday night’s coverage.

It’s a Thursday night in June, so the relative ratings upside is still great for those that choose to air the proceedings.  It’s a slow Thursday night to boot, with no significant sports scheduled (sorry, Bolts and “Gers fans, the numbers speak volumes to the real impact) and an extremely lackluster schedule of reruns being pre-empted.  Losing an encore telecast of the doomed United States of Al in exchange for this look at the real United States may actually produce better ratings for CBS than they otherwise would have gotten.  In aggregate, these hearings will likely attract a significant audience, much as State of the Unions or presidential press conferences do when you total all of the numbers for the multiple outlets that will televise it.

But the network that more often than not gets the largest audience of any single outlet in such cases, FOX News Channel, will not air the proceedings, instead relegating their coverage to the much lesser foorprint of FOX Business Network.  They actually have more to lose than most.  On many summer evenings, Tucker Carlson Tonight is watched in real time by more people than any other program on any network.  And it’s fair to say to that his audience dismisses the relevance and indeed the veracity of these hearings. 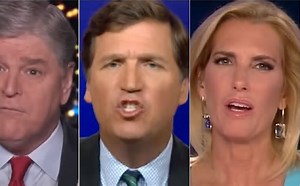 So no surprise that Tucker, along with Sean Hannity and Laura Ingraham, will be on their regular schedule, in effecting trolling the proceedings going on elsewhere with their own POV, effectively taking millions of viewers that the January 6th committee would otherwise hope would be paying attention out of the equation from the start.  When the dust settles, I still expect that one of those shows will attract a larger audience than many of the individual networks that will air the hearings.  And, undoubtedly, there will be another significant portion of those consuming any television watching a streaming service, much like any other night of late.  Remember a new episode of OBI-WAN drops Wednesday night, and not everybody can or will watch it then.  There’s also a whole new season of STRANGER THINGS to catch up on as well.  I strongly suspect a lot of Democratic families might choose to binge several on an otherwise slow weeknight.

Intriguingly, even the committee is asking for help from consultants with non-primetime experience.  James Goldston, a former Good Morning, America executive producer who also briefly ran ABC News, is being brought on to produce elements of the video segments that will accompany the live proceedings.

During his tenure, Good Morning, America contributed more profit to ABC than did any other program in any daypart on its air.  So, yes, someone whose greatest success in television was occurring at 7 AM Eastern will try to excite audiences at 8 PM.

We are a far more fractionalized and fractured country than we were nearly a half-century ago, when the revelations of the Watergate hearings riveted America.   Those hearings featured a charming Southern gentleman, Sam Ervin, as a breakout leader, and elevated John Dean to iconic stature.  Whether any Trump staffer or testifier emerges as similarly compelling or credible remains to be seen.  Current plans are for there to be several more installments of this “series” as the summer unfolds, particularly as the ticking clock toward midterm elections grows louder and the realization that the window for making any case to any segment of the country is closing fast.

I’d like to offer that if those in charge really want to make an impact, consider leaving primetime to those in escapist worlds and maybe consider borrowing a page from previous political playbooks and air future chapters in daytime first?  There’s more hours to play with, more potential to get the attention of “breaking news”–even in Chris Licht’s world–by playing out at a less congested time, and always the potential for talking heads to recap the news events in primetime, which is, of course, what the FOX News trolls will be doing anyway.

FOX has historically counterprogrammed primetime news events with alternative entertainment.  Thursday night is merely a continuation of that strategy.   Sad as it may be to admit, their strategists–many of whom are in the same mindset as those who will receive allegations and even indictments this week–have simply been better at attracting attention and viewership.  And Goldston certainly knows that as well.

So perhaps we might see Joe Millionaire or Michael Strahan join these compelling personalities in future weeks? 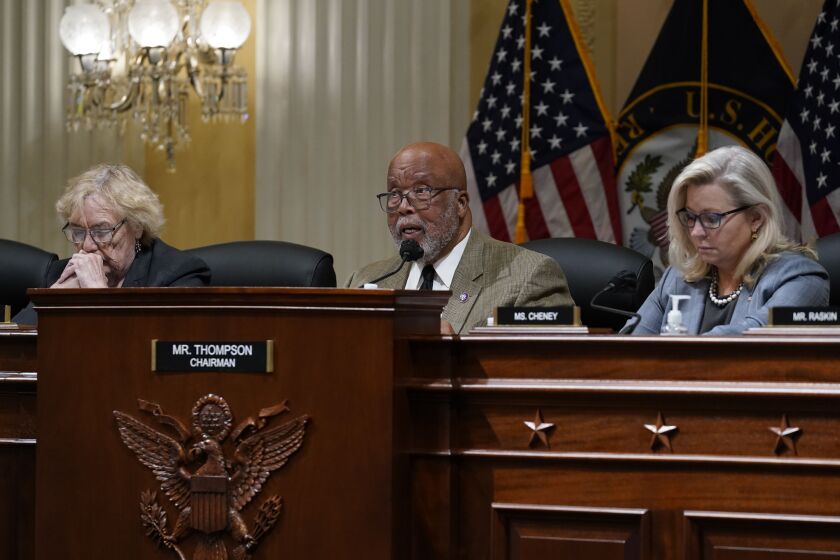 We’ll see.  Because I fall on the side that a lot of people that should see Thursday night’s festivities won’t.