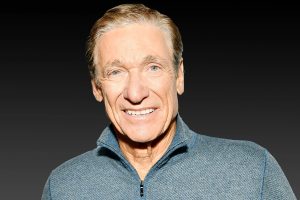 This is sort of a milestone for this space, the 150th of these exercises since we started dabbling roughly ten months ago.  As I have struggled to find a voice and an audience, topics have wavered between, as one astute observer shared with me, “pop culture, media insights and a personal journey”, three words have remained constant.  The three words that typically end each entry:  Until next time…    The other constant is that there is a back story to that.

Those words ended every broadcast of the original A CURRENT AFFAIR, the syndicated tabloid magazine that marked my first real opportunity to participate in the world of billion-dollar media and journalism that I grew up craving.  Its host, Maury Povich, delivered those words at the end of every show he anchored.  Usually, Maury would deliver those words as both a signoff and a warning for details on the next show’s lead story that was promoted at each show’s end.  In what was then breakthrough but now standard FOX video journalism style, the tease would raise a question, show something provocative, and often leave you curious, if not breathless with anticipation.

At the time, Maury was a respected local news anchor and reporter with particularly strong roots in the Washington, D.C. market.   Maury’s father Shirley Povich was a legendary sportswriter and editor for the Washington Post, a career that began in 1923 and eventually spanned three-quarters of a century.  Shirley was covering the original Washington Senators when they won their only World Series title in 1924, capitalizing on a brief downturn in Babe Ruth’s career with the Yankees to steal a championship that ultimately inspired the hit musical DAMN YANKEES. 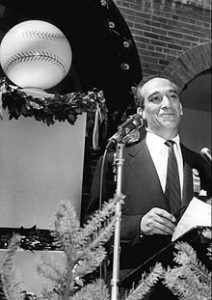 When Maury anchored a daily talk show for the powerful Metromedia-owned independent station WTTG in the 70s, he literally was second generation royalty.

Eventually Maury moved on to greener pastures, anchoring the nightly news report for ABC-owned KGO-TV in San Francisco.  Maury’s West Coast career hit a snag when he factually teased a gruesome story thusly:  Severed Penis Found On Railroad Tracks!  Film at 11!    He was gone soon after.  He eventually returned to WTTG and was on air when Rupert Murdoch bought the station along with six other larger market beachhesds and was determined to launch a fourth broadcast network from them.  While Barry Diller and the West Coast team chased late night and Joan Rivers, Rupert and his Aussie band of swashbucklers landed in New York and were determined to take the spirit of the New York Post and the London and Sydney tabloids he had built News Corporation on and tackle other dayparts.  For a team whose most famous headline was HEADLESS HORSEMAN IN TOPLESS BAR, a talent known for a severed penis and a chip on one’s shoulder such that Maury was became the perfect choice to headline A CURRENT AFFAIR.

We’ve previously discussed the creative team and our 9 am drinking binges. My small role was to help them find the right path to getting that creativity noticed in America.  Initially, Rupert intended to put A CURRENT AFFAIR on in prime time head-to-head with ABC, NBC and CBS entertainment.  much as Bill O’ Reilly and Tucker Carlson have done for FOX News Channel in this century.  Soon after he took over the Metromedia stations, he rushed the show into production and mandated that it run as close to that time slot as possible.  Because of other programming commitments, his compromise was to slot the show immediately adjacent to prime time, with flagship WNYW in New York the first guinea pig.  I was charged with evaluating the show’s appeal in New York and assessing its potential beyond.

What we learned was that stories notwithstanding, Povich resonated as the voice of the viewer.  A raised eyebrow, a wink and a disbelieving tone to his raspy voice as he narrated the tales of murder, high crime, infidelity and celebrity misbehavior that made up those early episodes proved to be a connective tissue.  His background in markets outside New York translated well to test audiences we surveyed in outposts like Atlanta and Milwaukee.  And in New York, the dreaded Nielsen data showed two distinctive trends. For one, after initially halving the ratings reruns of M*A*S*H had been delivering for WNYW, the show began to steadily increase its audience by roughly a share point a month on a steady slope, indicative of momentum.  More importantly, we discovered that the audience watching it was not the audience the station had with its sitcom reruns–instead, it was disproportionately made up of viewers from the local 6 pm newscasts who crossed over to Channel 5 for ACA.

Armed with those findings, we determined that the challenge for an outlier like A CURRENT AFFAIR to find a viable audience without the opportunity to capitalize on adjacencies to established local news would ultimately be too much of a challenge for the show to establish itself.  The TV landscape of 1986 had fewer choices of consequence and new shows more dependent upon time slot showcasing than the interdependent ecosystem of today or even the one FOX News found its way into at the end of the 90s.  We took this hypothesis into meetings that included Maury, who was also a producer, and Murdoch himself.

The Aussies were initially disbelieving and, of course, echoing The Bawss’ desires.  But Maury knew ratings and audience flow from his decades in local TV and understood what we were positing.  By opting for syndication–in transparency, the division I worked for–versus the network we’d be able to find more opportunities for success.   Besides, there had been several failures in syndication that fall, most notably a revival of the classic game show TRUTH OR CONSEQUENCES that had been particularly disastrous where it went head-to-head with JEOPARDY! or WHEEL OF FORTUNE.  One high-profile station that had cratered with TorC was the same KGO-TV in San Francisco that Maury left after the severed penis foul-up.    Maury said, “Rupert, the kid’s making sense.  Give me a chance to prove we can work there and no one will be able to say our show is just a New York thing, and I’ll finally be able to shut up everyone at the station who is still laughing at me”.

So just after Thanksgiving we premiered A CURRENT AFFAIR on its first station outside the FOX group, on a strong station owned by ABC that had somehow deteriorated to less than a 10 share and at times ranked as low as fifth in a market with only four VHF commercial TV stations.  By Christmas we had increased the audience to a 17 share and were a solid number two within a couple of share points of WHEEL.  Soon after, we debuted in afternoon time slots in the same Milwaukee and Atlanta markets our test audiences had shown encouraging results in.  We showed similarly positive trajectories and delivered even higher ratings there.  Maury was redeemed, Rupert and the Aussies embraced me, and we both went on to better things. 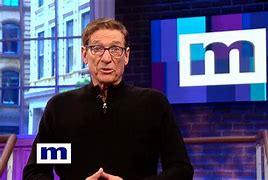 In Maury’s case, that better thing was his daily talk show that eventually became even more tabloid-y than ACA, with his show eventually focused on bizarre cases of who was the father of someone’s child. Much like his eventual co-Torquemada Jerry Springer, Maury watched over the inevitable sh-tstorms that his shows would frequently dissolve into with the same raised eyebrows, disbelieving narrative and voice of the viewer that he honed on ACA.  After 31 seasons of doing that, last week Maury announced that his show was ending original production this spring.  Another example of what used to be the robust business of syndication is ending.  The business being what it is today, reruns of MAURY will continue to be offered next fall, and it’s likely many stations, lacking many other options, will continue to air it.

And Maury may not yet be completely done.  Dad worked until he was 92.  Maury’s a mere 83.  I for one would do something with him in a heartbeat.  I do owe him. Just nothing involving a severed penis.