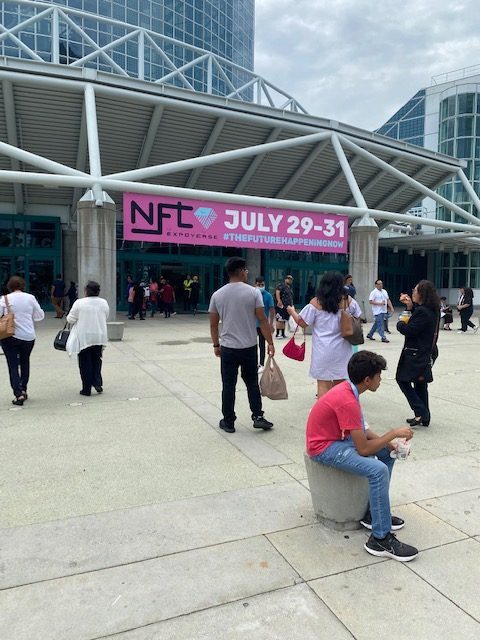 The NFT Expo actually is in the process of being held, in person, indoors, with a sizable number of normal people actually sane enough to not hide behind pig snouts and face diapers, in the Los Angeles Convention Center.  For me, it was a joyous reminder that the only way it is actually possible to truly learn and interact with professionals is to physically connect with them, let them demonstrate their actual products, hand you a printout or write down additional contact info on the back of a business card (you know, the ones made of paper!) .

I’m particularly sensitive to this because the very foundation of my media career was built around the experience of conventions–the friendships, the competition, the shared hotel frustrations, bus rides to and from party venues and opportunities to experience in-booth demonstrations and swag.  I don’t know about you, but there is no measure of “staying safe” that I believe is worth the loss of this necessary component of human contact.  I feel both envy and pity for the likes of some who were quoted in a front page Los Angeles Daily News story this morning  that hinted that not only is COVID still prevalent, but because “experts” can cite examples of situations where people who were never diagnosed may indeed have already had the virus, it gives support to people who pontificate their arrogant paranoia–even after more than two years of, as they almost defiantly shared, “being a hermit, and that’s not likely to change anytime soon”, they scoff and remain aghast that people with viewpoints like mine are allowed to walk the Earth.

Well, you do you, boo.  But screw your unwarranted fears.  As these candids attest, you’re fortunately not the dominant belief any more.  The NFT Expo was far smaller than the massive NATPEs of my past, but the experience and education I was able to get from experts in a field I admit I don’t fully understand, and am warned is full of scammers.  But as I conversed face-t0-face with entrepreneurs and tech-savvy, healthy people from 18 to 80, I did pick up a few new buzzwords for my vocabulary, downloaded a few new apps for my already overcrowded device that could process the platforms and support digital currency, and actually learned what ethereum is and how it’s valued.  As of this writing, 1 ETH is worth $1,702 dollars. It currently has a market cap of $207 bullion dollars.  And that’s with recent declines.

So I guess these people could afford the cost of exhibits and travel, and even the $16 loaded nachos they offered at the Compass Cafe (which I got a taste of, BTW–way too spicy for me).  And they also taught me that I actually knew more than I thought I knew about their world.  After all, their entire business model is built on data and analytics, and I’ve been doing that longer than many of them have been alive.  Folks who create authenticated, digital content analogous to art and memorabilia patiently explained how the adoption of contactless ticketing is actually creating a new way for fans to engage with their passions, no matter how niche they may be.  And many people had successfully moved over from traditional media to find new life in this brave new world of Web 3.0 and blockchain.

See?  Two more terms I can now impress you with that I know!! 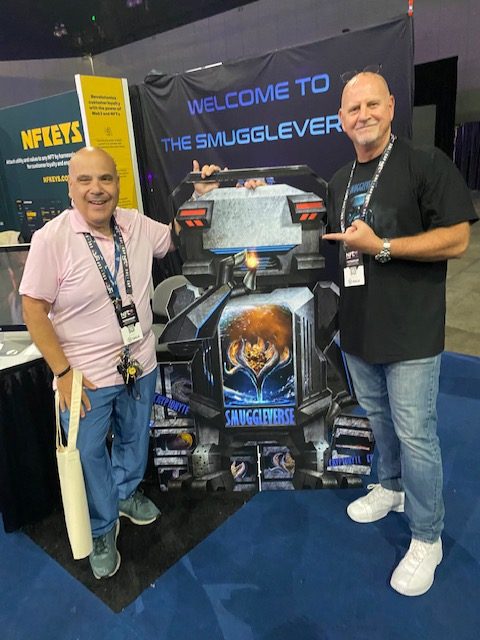 One such exhibitor brought a special meaning to connect with.  He’s a longtime friend of That Person, let alone my special friend.  They have mutual histories in a different field.  He was there to launch a platform he refers to a “digital weed”.  Snuggleverse.com will explain it in more detail should you have the desire to invest.  He’s an extremely successful businessman and this venture for him is a labor of love that expands his connection to legal cannabis by creating a virtual world that features the presence and story of a longtime friend of his, one he hopes to be the subject of a movie.  I at least had the chance to share my thoughts on those possibilties, given the demand of streaming services to produce and distribute such content despite the shrinking market for non-blockbuster franchises among tradiitonal theatre chains.  Besides, anyone who would be able to watch that film in the comfort of their home was more likely to smoke a bowl, and his other invention would help them safely grow it legally and far less expensively than going to a dispensary.  Win-win situation.  He was a tad preoccupied with the countdown, so he barely had time to pose.  But he did, so there’s proof we actually shook hands. 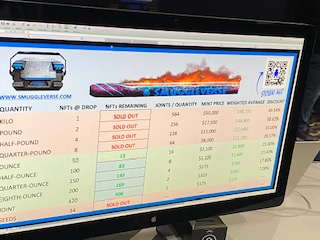 When I returned yesterday afternoon to see how his launch went,  he proudly displayed the deals he had already made with investors, much as TV distributors would post which stations bought terrible first-run game shows at the conventions we both attended back in the day.  By my count, he had made more than $229,000 in a few hours.

Now I have something else besides his friendship with That Person to admire. 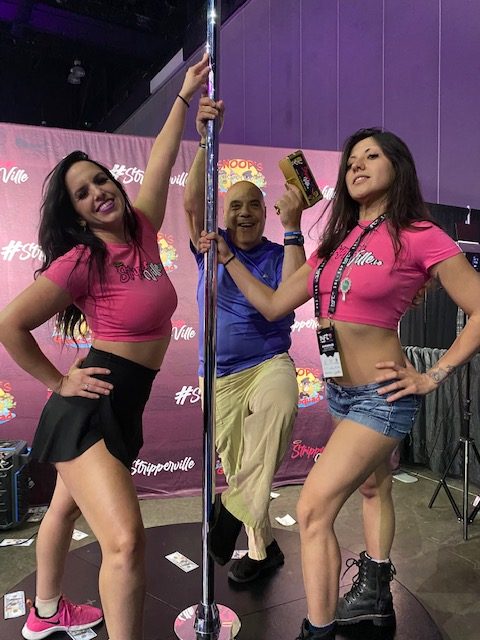 As for me, well, let’s just say I may have found a new opportunity and calling of my own, one even more true to my passion.  Clearly, I can’t physically live up to the standards of the performers who posed with me.  But I can virtually hold my own and, more importantly, my skill sets can potentially help the creator better align his options as he moves forward.  We will be talking again soon.

And as I left, I saw that the next time this conference convenes, it’ll be in Fort Lauderdale, Florida, during spring training of all things.  The possibilties that await after I have a few months to follow up on the leads and nuggets of knowledge I gained by actually being in person are limitless.  Ya never know who might show up in Fort Lauderdale, right?  Maybe some old friends who have residences within a few miles of the convention center?

So much as Must-See TV urged decades ago, I vow to “be there” next spring.  I sure hope you will consider this an open invitation to join.

Stay safe?  Save it.