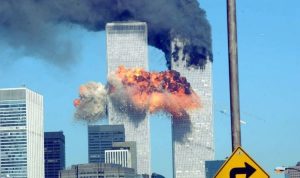 As I write this, there are memorial services ongoing in New York, Washington, Pennsylvania and elsewhere commemorating the somber 20th anniversary of the attacks on the World Trade Center.  As a native New Yorker, I took these attacks emotionally and personally.  While I did not personally lose anyone close to me in the buildings or as part of rescue efforts my father had worked in those towers for many years; one of my summer temp jobs was on the 84th floor of One World Trade.  In losing those buildings I lost a connection to my youth and felt the loss.

My 9/11 story isn’t as grim as others’ but it is personal.  I was in Columbus, Ohio, having flown in late the night before to do the first leg of a FOX Sports focus group that we had selected the market for specifically because of its relevance to the fledgling NHL expansion Blue Jackets on the area’s regional sports network.  I had every intention of getting out of Columbus as quickly as possible, my intention to get to Phoenix on Wednesday morning in time to see Randy Johnson pitch for the Diamondbacks courtesy of FOX Sports Arizona in a corporate suite that night.  Yes, I frequently co-mingled business travel with my sports obsession, an obsession that my employer was only too happy to indulge and one that has allowed me to visit the majority of baseball stadiums in use today.

I was traveling with my moderator, a lovely woman with a passion for research and a greater passion for food and wine.  Typically we’d conduct our research during early evening hours so as to get employed men on their way home from work, finishing between 9 and 10 in the evening.  That would leave us enough time to cajole a fine restaurant in the area to keep the kitchen open for us “VIP executives from out of town”, happily serve us a gourmet meal with a superb selection that my moderator would insist we try, and allow us to savor our food and wine even past their usual closing time.  Particularly in smaller cities, they’d be fascinated with our connection to FOX; I’d often have tzotchkes to give the waiters and busboys, and FOX always picked up the tab.  It did not suck.

We had every intention of doing just that on Tuesday, September 11th.  After getting into our hotel after midnight, I had grudgingly asked for an 8:30 am wake-up call to see a new syndicated show a good friend was executive producing that ran in the Columbus market at 9 am.  I ordered room service, turned on The Today Show and settled back into bed groggily awaiting my omelette.  Before the cart even arrived the first plane had hit the first tower, and Matt Lauer was beginning the split screen narrative that is now etched into the memories of all who were around then.

The omelette came, I sat up and watched the next hour and a half in disbelief as the towers disintegrated, the gravity of the situation became apparent and the horror set in.  Our hotel was three blocks from the state capitol, which meant we were immediately in lockdown.  We were trapped in our rooms.  My moderator, a notorious late sleeper, finally called me at noon in disbelief to commisserate.  Her first reaction?  “I guess the restaurant I picked out for tonight is closed”.

By mid-afternoon the lockdown was lifted and we could at least go outside to stretch our legs.  My moderator cheerily said “I can’t just sit and watch this shitshow on TV.  Let’s explore.”  Downtown was deserted, national guardsmen patrolling the empty streets.  We found a pathway down to a trial alongside the Olentangy River that snakes through downtown Columbus.  It was, as so many have documented, a picture perfect day, sunny, mid-70s, no humidity.  We just started walking and talking.  My moderator was frightened, separated from her newlywed husband who was calling her every hour on the hour.  She would reassure him she was safe but as soon as she hung up she’d start to panic about the possibility of being in the crosshairs of a target–being three blocks from an iconic building certainly put in more danger than most.  We just kept walking.  And talking.  And reassuring each other, not believing the words we were saying, that we were gonna be OK.

We were trapped in Columbus for three more days.  By Thursday night restaurants were starting to reopen; you’d better believe we had that meal, and FOX was only too happy to pick up the tab again.  She reintroduced me to viognier, a French white wine that I had had in Cannes a few years earlier that we had not been able to find on our many travels.  My moderator, a budding sommelier, thought it would be a perfect compliment to the scallops we ordered; light, sweet, and hopeful.  Exactly what we needed.  It felt great to savor that wine with someone who fate had allowed the transformation from colleague to friend.

We finally got a flight out the next morning, a packed America West non-stop filled with people who sat silently as they prayed our plane wasn’t one that was going to be diverted into a building.  We landed in LA safely, her husband met us at the airport, and they cried as they hugged each other.   As I sat in the backseat of their car riding home, they held hands.  I looked on with envy.  But I was alive and safe and home. 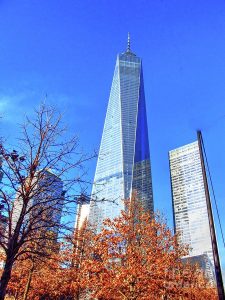 Twenty years later: It’s been years since I’ve spoken to the moderator.  My jealous wife had ordered me to sever ties with her because of her friendship with a woman who was a childhood thorn in my wife’s side.  I foolishly pulled my business from her, which cut severly into her earning ability just as she was giving birth to her son.   She deservedly cut ties with me.  Occasionally I’d run into people who knew her; they’d mention me.  Over time some of the hurt healed, but not enough to allow her to forgive me.  I suppose that’s deserved.

As we know my wife is that only in name these days, and I’m doing my best to reconnect with those she forced me to cut ties with.  My moderator’s son is about to graduate high school, and he’s a damn good looking kid.  She’s still friends with my wife’s “tormentor”, and I’ve learned the other side of that story.  I’m going to send her this post in the hopes it might rekindle some desire to go for another walk.  I do a lot more walking these days.

Last week I visited the Freedom Towers in New York for the first time.  It was inspiring.  Beautiful.  Was there just before the torrential rains hit the city.  Different, of course, but reinvigorating.  I thought of her, Columbus and what was lost, and saw what was rebuilt.  I knew I had to at least try and rebuild what my own actions had blown up.

I hope she sees this.  I hope she’s open to some sort of reconnection.  I still love viognier.  And I’ll never forget.