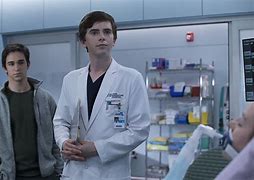 Yesterday I very briefly caught a display ad on a trade site that signaled that my former colleagues at Sony were very quietly making available weekly episodes of THE GOOD DOCTOR and S.W.A.T. to local television stations in the fall of 2022.  These days, the repeats of any television program being made available to over-the-air stations is news released in a whisper to a limited number of interested parties who may be invited to a Zoom presentation occuring in lieu of the convention that was postponed for the second consecutive year earlier this month (that old “abundance of caution” thing again).That wasn’t always the case.

At the time of day I’m tapping this out on a Thursday morning in mid-January decades ago I would have been likely in a different city, staggering back to my hotel room after a night of celebratory “team building” following the last full day of the NATPE convention.  Whether you were part of a team of sellers looking for release after days of preparation, sales drills and intense negotiations in a crowded convention center, or a team of buyers lighting a proverbial victory cigar after having aced out your market competitors for the rights to one of these shows,  we all looked forward to what we unashamedly called Numb Nuts Night.

If you emerged from the sales season and your year-end review with a job, and you had meet your quota of dollars booked or markets cleared that you were tasked with announcing at the convention, you got to party in the French Quarter or on a pleasure yacht with your peers and competitors.  For a younger version of me, it was one of my first experiences with debauchery on an expense account. You haven’t lived until you’ve seen your boss and his female counterpart at another company simultaneously getting lap dances from the same transsexual dancer while sipping on Cristal that his corporate credit card was paying for.  If you turned around, you’d often see the star of a prominent network TV show stumbling into a cab that their manager hastily called after they almost got into a fist fight with an aggressive partier.  Welcome to Numb Nuts Night.

For as much attention as the myriad of original talk shows and game shows would garner at these shows fighting for their very existence, the real money was being spent on reruns of network TV series, otherwise referred to as “the back end”.  Most sitcoms and dramas are produced at a deficit, or at best break-even, as broadcast networks typically paid only a portion of the total cost to produce and market the show.  When a show reached  or approached the magical threshold of 100 episodes its rerun availability was trumpted with billboards plastered from the airport to downtown, the cast and producers being flown in for a press conference (hence the drunken fist fights) and everybody celebrating what would likely be the onset of profitability for all who participated in the show’s potential of delivering it.  International distribution, particularly for one-hour dramas, would often close the gap between deficit and break-even,  Once you sold the show’s reruns to U.S. buyers, you could afford Cristal and lap dances.

Perhaps the one show that to me defined this era was the crime drama HUNTER.  HUNTER was a modestly successful NBC drama that featured ex-Los Angeles Ram and New York Giant Fred Dryer as (per the marketing blurb), “a renegade cop who bends the rules and takes justice into his own hands”.  Paired with an equally rebellious female partner (played by the stunning Stephanie Kramer), the tough-minded duo set out to crack down on L.A.’s slimiest criminals”. 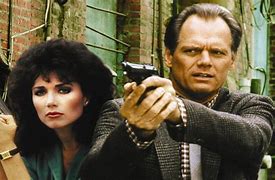 HUNTER was produced by Stephen J. Cannell, one of the last true creative moguls who fully controlled the rights to his shows, hiring domestic and international sales teams to sell the back end as aggressively as the protagonists of his series chased down crooks.  Cannell not only loved the selling of his shows, he also owned a group of successful independent and FOX-affiliated television stations that bought and cleared HUNTER and his other shows during the late 80s and early 90s.  Stephen was an immediately recognizable, charming and brilliant presence at these conventions, always ready for an early morning panel discussion or hosting one of those parties.

If you were a buyer as I was, the price of admission to that world was a year-long assault from his sales team on being urged to buy shows like HUNTER.  I once endured a sales pitch delivered in the balcony of an Emmy Awards ceremony from his head of sales who sat a row in front of me loudly whispering during the Best Actor presentation while leering at the cleavage of my date.  I did eventually buy the show for a couple of my stations, but not before a call had been placed to Cannell’s office suggesting that his salesman reserve his spiel for my office hours and keep his gaze on me.  Stephen’s assistant agreed.  I got the show at a deep discount.

These days shows’ back ends are typically reserved for corporately connected streaming services and cable networks , many never even being offered in any window to broadcast stations.  The 100 episode threshold is archaic, with the realities  that episodic viewing frequency has diminished to fractions of a number less than 1 , that you can binge-watch an entire series over a matter of days and few shows even reach that total anymore.  The Sony hours, as well as several that CBS Media Ventures makes available to its stations (this year, it’s SEAL TEAM and BULL), typically run in weekend time slots, late at night on the stations affiliated with a network and on weekends on its duopoly stations affiliated with less populated network such as My Network TV or none at all,  Only a limited number of episodes are made available to stations to fill these slots, thus bringing down the cost of paying for broadcast residuals that are necessary to make them available.  They are typically “sold” on a pure barter basis, with stations selling roughly half the commercial inventory.  In those time slots, it’s not an issue.  There’s only so many My Pillow direct response ads that anybody can stand. 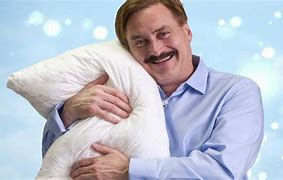 At least stations can claim some presence of popular titles and award winners of the current century.  The limited number of episodes, particularly for shows like GOOD DOCTOR that have an ongoing A story, effectively act as barkers for subscriptions in the same way UFC or WWE prelims do for the main event.  But at least they’re still available for free somewhere.

I went back to that trade site this morning to see if I could nab a screen grab of those Sony ads to prove they exist.  They are already out of rotation.  Not only was there no live NATPE and no billboards, the virtual ads didn’t even make it past Numb Nuts Night.

As I wrote previously, I felt particularly cheated by this year’s NATPE cancellation. 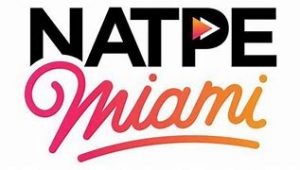 I really looked forward to a reason to go to Florida to network with old friends, make new ones and at least pretend that the days of boat parties in Miami with hot girls in slingshot bikinis or private rooms at strip clubs in New Orleans after several rounds of hurricanes at Pat O’Brien’s still existed.  Some of MY best pitches occurred while tipping one of those oversized drinks.  And I tried not to leer at the cleavage of whoever was in view.  Sometimes I succeeded.

Maybe they’ll be a next year.  Maybe another deal will be made.  At the rate this pandemic and the media landscape is going I have my doubts.  For all we know by next year the Metaverse will have grown ubiquitous enough that Numb Nuts Night will exist only on an AR headset, the hurricane will be in a glass on my desk and the lap dance will be generated by a machine.

Call me old school, but I kinda wish that prediction doesn’t come to pass.