So just when I thought things were bleak for me I learned early today of the untimely passing of yet another business colleague who I used to see frequently back when people actually interacted in person and when I used to have a position of influence. 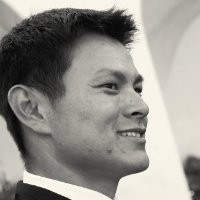 So yes, it’s incredibly tragic that Tommy Cheng, a CBS research vice president who I considered a friend through numerous positions at many different vendors I collaborated with, suddenly passed away this week while on a Hawaii vacation with his wife and children.  Tommy was 45.

I didn’t know hin all that well, but well enough to know he loved three things more than anything else in the world.  His family, the Raiders, and the fact he was working on the client side at the #1 network after years of being a hard-working gun for hire on the other side.  In that order, as it should be.

I learned of this, as many did, in a LinkedIn post from his boss, a prominent executive who has been written about here previously.  There is no question she honored him in death.  And, sadly, there is little more any of us to do for him but mourn his far too premature demise.

Except, of course, to perhaps take a fleeting moment to consider how we treat people who are still alive.

Way too often in my business, and I suspect in others’, the only time anyone shows emotion or affection is when someone we know passes away.   Back when there were funerals that people weren’t petrified to attend in person, they often became business opportunities. At my own mother’s funeral, several executives attempted to do business deals while waiting for her casket to be rolled in.  While I was insulted, I was consoled by learning that one of the executives in attendance had actually pitched a colleague’s higher job to their division president while they were visiting him in the ICU after that colleague had been administered last rights.  His justification?  “There might be an opening, and I thought I’d at least let you know I’m interested”.

Desperate as I am for employment, I’m not going to lower myself to doing that.  Besides, I’ve heard from credible sources how Tommy’s supervisor treated  him while he was alive.  Let’s simply say it wasn’t as honorable as that person wanted the world to otherwise believe, and I don’t suspect this person is capable of remorse.  Much am I’m certain I could do that job well, I’m not eagerly seeking doing it there, even though I suspect said supervisor is already looking for his replacement

What I will do is gently, but firmly, remind others who once upon a time might have called, texted, e-mailed or otherwise simply just felt it an obligation to reach out to me to let me know of this.  Apparently, some of these people only reserve these courtesies for people who are still in position to provide projects and leads to support their seven-figure homes, their six-figure salaries and their five-figure tuition bills (yes, in some cases, that’s six as well).  Those of us with four-figure net worths are simply forgotten about, even when we’re given lip service to the contrary.

One in particular, who was also once Tommy’s boss, actually called me out at a recent convention in person for daring to post on Facebook something to the extent that making that assumption publicly tarnished her “reputation”.   As if what people say or post on Facebook actually reflects their true life, as opposed to the aspects we choose to share.  So I owned up to it and apologized, and was assured there’d be a fresh shart–perhaps even a hike, as this person is an avid and inspiring athlete.

You guessed it; that person’s way too busy for me.  Still waiting for the invitation.  Guess all the big parties at the fancy club they belong to take precedent, and inconvenient truths like me no longer warrant an invite.

Am I being petty?  Arguably.  But put yourself in my position, if that’s possible.  How would YOU feel?

Many years ago another onetime colleague and friend passed away prematurely.  In his case he was a victim of his own demons, despite the efforts of two of his bosses to send him to rehab centers at their company’s cost to help him try to kick a debilitating cocaine addiction.  He had plenty of chances, and a patient wife waiting for him each time.  He simply couldn’t beat his addiction.  At 55, he was gone.

His last supervisor hosted many of us in person at his beautiful estate on a perfect June day not unlike the one we are experiencing today.  Many of the people who were there were once big shots at their companies like me; at the time, plenty of them still were.  We used to compete like school children for time slots for god-awful talk and game shows and really terrible low-budget sitcoms.

As the evening wound down, a few of them who once were in a band with our departed friend broke out guitars and a karaoke machine and we sang his favorite songs, with really good wine flowing along with our tears.  We were happy to be alive, and we had a shared moment to reflect on what really was important.  I learned only then one of them had a lost a child to a kidnapping.  I learned another had battled his own addictions and had dedicated his life to helping others in recovery.  I learned another had recently had a stillborn child in the midst of what I had otherwise thought was a series of consecutive births.

Funny how you lose track when you’re out of touch.

I’d like to offer that Tommy’s boss, or his previous one, might want to take a page from my past and if they really want to show some respect for his passing open their home, or at least their heart, to those of us who simply want to be treated with a shred of respect and consideration in life.  Let us all toast his memory–maybe not now, but maybe on a fall afternoon when the Raiders are playing?  At least put out a save the date?

F-ck this pandemic.  I’ve said it before and I’ll say it again.  There is no life worth saving if one feels it must be spent socially distant.  Thoughts and prayers are worthless.  Connecting people who are still breathing is how we all used to become closer and personally relevant.  Why has this world become so pathetically afraid of doing that?

I’m really, REALLY hopeful someone will take the lead on this; I’m happy to help in any way except monetarily.  God, I wish I could, but I absolutely can’t.  It DESTROYS me that I can’t be more generous,.  If you think I’m being as disingenuous as Tommy’s supervisor, well, you honestly don’t know either one of us well.  I really, REALLY, REALLY wish you’d try.

And then maybe, just maybe, you might give me a lead on something else besides his now-open position.

I’m certain Tommy would try were he still around to do so.  The best way one can honor his memory is not with blessings, but with emulating his best qualities.

I vow to try even harder,  since I’m still alive.  I sure hope you do, too.