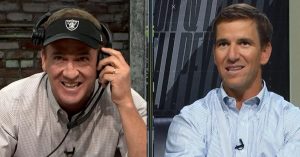 Last night, while Los Angeles dried out from a daylong soaking rain, I plopped down in front of the big screen, a plate of mushroom fettucini in hand, and watched Monday Night Football in a new way with more than a million strangers, though in truth all by myself.

I’m reminded that I’m the latest to indulge of the phenomeon of a watch party, an experience where people collectively interact around the country and sometines the world while watching a big event like a nationally televised live sporting event or a highly anticipated episode of a cool TV show,   While these have existed online for several years, ESPN has taken it to a new level by offering Peyton and Eli Manning the opportunity to tweak the booth analyst role for a fan-centric analysis hosted from their respective living rooms.   Devoid of play-by-play but heavy on graphics, the ESPN2 parallel broadcast features the brothers and some a-list guests (who also join virtually) doing what we’ve been doing for decades–chilling out, talking, paying attention to the game only when the action warranted and listening to solid insight and analysis from a couple of bros who just happen to have four Super Bowl rings between them. 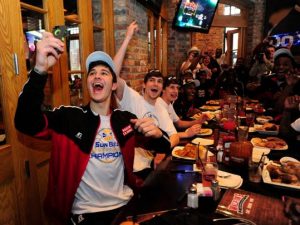 Effectively taking the experience of a Google Hangout to a primary screen, “Peyton and Eli” has been one of the most favorably received innovations to a 52-year tradition in decades, and has added millions of incremental live viewers to a broadcast that had seen significant audience declines concurrent with escalating rights fees.  Ironically, the pandemic has accelerated the opportunity for this kind of innovation to succeed.  In a world where millions of sports fans remain reluctant to interact indoors with people, the virtual experience of watching the game with the Mannings has replaced the traditional ritual of going to a bar or a friend’s house to have some food, make some side bets, high-five a touchdown and maybe make a new friend along the way.

As a passionate sports fan some of my happier moments have been watching games in just those settings.  For many years a well-off work colleague hosted viewing parties at his house almost every Sunday, offering five different kinds of sausage, four different kinds of chips, three different dips and an obsessively endearing nature.  Every March Madness we’d go to Las Vegas as a group and watch 48 games in 72 hours, always culminating with a late night steak at The Palm with a wonderfully generous Emmy-award winning fellow nerd.  It was the highlight of my year.

No matter how much they try, no matter how inviting the Manningcast is, it’s still no replacement for watching a game with an actual human being.  After an exciting game that saw a late field goal see my Seahawks lose I felt disconnected, indeed “incomplete”.  I quickly moved on to the Clipper game, washed down my pasta with a big bottle of iodized water, and drifted off to sleep.  Hardly a special night.

These days this friend is hunkered down,vaccinated but wary, fearful for contact, waiting his booster shot.  I just got mine so I’m safer.  I don’t know what his appetite is.  I’m sending him this post to remind him how much I miss our hangouts.  A good game should be communal, not isolated.  I can’t wait until he’s ready again.  I’ll even buy the chips.