If I’ve been spending what some what consider to be quite a lot of time and effort on the return of Bob Iger as CEO as Walt Disney, forgive me.  I admire what he’s accomplished to date, his vision, his ability to pivot, his dedication.  For my money (and, admittedly, there’s scant little of it left), he’s arguably the last of the truly successful longterm moguls who, to the best of my knowledge, doesn’t have skeletons of consequence in his closet to offset his legacy.

Ah, that l-word, LEGACY.  About the only red flags being offered up by pundits and “experts” as causes for concern would be how the odds are stacked against Iger being as successful on this go-around as he was the first time.  The streaming business he championed starting has hemmoraged billions for Disney–reportedly, eight billion out the window this year alone–and offset whatever gains ex-CEO Bob Chapek was able to squeeze out of loyal parkgoers who grudgingly but consistently chose to pay higher fees and support incremental services such as express apps and priority restaurant seating to make their long-desired return to Magic Kingdom pilgrimages as luxurious and pampered as waltzing through the humidity of Anaheim or Kissimmee in $50 t-shirts can be.

And the pundits are indeed working overtime on what is otherwise a holiday week.  Bob Iger loves to make deals more than Monty Hall ever did; indeed, his initial run was punctuated by numerous, high-profile acquisitions and alliances, ranging from Lucasfilm and Pixar to 20th Century Fox.  Not to mention an alliance with Apple that accelerated the rollout of “the video I-pod” (they changed a vowel eventually) and effectively produced the most essential parental calming device for anxious children since Ridulin.  And, initially, a content sale to the same company that was allowing their DVDs to be rented without schlepping to a physical store that provided the mechanism to deliver the content to those I-Pads.  Indeed, Netflix’s dramatic growth during the latter half of the previous decade was heavily driven by Disney content being put literally in the palms of 6-year-olds’ exceptionally adept hands.

The rumors of a deal with Apple are rampant.  Joe Bel Bruno of Sharon Waxman’s THE WRAP delivered a compelling “pro” piece this morning that began:

“He’s going to sell the company,” one Disney insider who has worked for Iger predicted. “This is the pinnacle deal for the ultimate dealmaker.”

Landing a deal with Apple (or some other megabuyer) would also cement Iger’s legacy. “I think he’d welcome it — he’d be the last CEO of Disney,” a former top Disney executive told TheWrap, noting that the two companies have “similar brand identities” and could benefit from a merger. 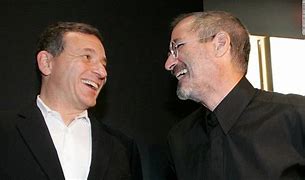 In Iger’s 2019 autobiography “The Ride of a Lifetime,” the executive wrote chapters about his friendship with Steve Jobs. He and his wife, Willow Bay, were close friends with Steve and Laurene Powell Jobs, even spending holidays together and vacationing in Hawaii. He even writes about standing in front of Steve Jobs’ grave when the tech visionary’s wife uttered: “I asked him if we could trust you. And Steve said, ‘I love that guy.’ ”

Apple CEO Tim Cook, known to be a safe player with relatively few acquisitions under his leadership, might have given Wall Street a big hint in April. During a call with investors, Cook said he would not rule out acquiring a large company, and that the main drive was to secure strong intellectual property and big names. 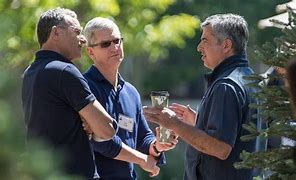 We’ve all spent more on something than we should, just because we wanted it. But we’re not Apple, which has no reason to want Disney other than how that would balloon out its Apple TV+ library.

Apple’s had the chance to buy libraries of content before, and even reportedly held some preliminary discussions with MGM. But it passed on that deal, and hasn’t introduced any others.

Disney is not ready to be part of a larger synergy machine than its own, nor does Apple appear to have any inclination to get into the theme park business, even in part.

Disney is not in a weak enough position to make it a bargain for Apple, nor does it have anything Apple especially needs.

But…just suppose…there was a preliminary step that could provide Apple with something it could covet.

Netflix and Disney are entering a spirited battle for advertiser support and lower-cost subscriptions just as a recession is looming and budgets are being slashed.  Both offer scale and compelling content, but the challenge at producing enough new content to support that growth is overwhelming.  Netflix was unable to renew many of the more successful and enduring off-network series that fueled its growth, with Disney (and other studios) clawing back most of what did work for Netflix .  Netflix can’t make enough good stuff quickly or cost-effectively enough to fill the void.  And the production realities make renewing shows beyond four-ish seasons economically unfeasible, particularly when they appear to be unwilling to sell top content to what they perceive as competition.   Something HAS to give.

Arguably, Iger’s chief character flaw was to not find a suitable (at least to him) successor, and perhaps being so unwilling to cede power that he chased away several who might have been better suited to the task than was Chapek, who essentially was last man standing when Iger finally left (on paper) in February 2020.  It’s clear from most sources that he will have to do a better job at that task this time.  His contract is for two years, though if history is any lesson, that end date isn’t a given.  So at the same time as he is seeking to make Disney more desirable both to work at and to acquire, he will at some point be identifying a list of truly worthy heirs to his throne. 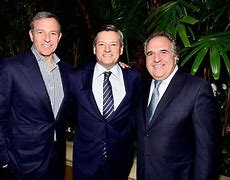 Ted Sarandos might deserve to be on that list.   (This picture also includes Jim Gianapoulos, who led Fox and Viacom’s global theatrical sales for decades, and wouldn’t be a bad free agent to recruit as a consultant to flesh out said list.).  Bela Bajaria’s global vision might be a great compliment to the likes of Dana Walden an John Landgraf.

More importantly, a combined Netflix and Disney gives Netflix a massive library of content–indeed, many of the titles that grew them to begin with–and potentially an even more desirable acquisition for Apple, which would solve their own library issues for tv+.  Assuming Disney keeps ESPN, it would also make Apple far more formidable to compete with Amazon for sports rights, domestic and global, down the road, and would in the process pick up perhaps the most prolific producer of live sports in the world.

And for anyone else like Gallagher who might believe otherwise, ponder this:  Do you think if a consumer had the chance to get a deal on STRANGER THINGS, the MCU, the college football championship game AND TED LASSO might want to purchase an I-Phone vs. a Samsung?

Something to gnaw on for the next few days.  Something substanital.  Not just fruit.