One more signpost that we’ve survived another summer of transition is the season premiere of Saturday Night Live,  The 48th such premiere was last night, and while it featured four new cast members, more importantly, it did not feature eight members of last year’s cast.  For reasons that included both career aspirations, personal dissatisfaction and, per the uniquely reliable New York Post, it was time for the show to go on a diet.  As Michael Kaplan and Sata Nathan recently reported:

Multiple sources told The Post that the decision not to replace everyone is calculated, as the large size of last year’s cast — 16 repertory players plus five featured cast members — was actually hurting it.

“Their cast last year got to be pretty sizable, but what my understanding from Lorne was, during COVID everyone wanted to stay together. It’s unusual they had such a large cast,” said a TV industry source. “One thing I had heard is that there were so many people last season that they weren’t able to feature people in the way that they wanted to.

“Now, [Michaels] has got to develop new people.” And so that process began, not only the first-ever appearances of such promising newcomers as Devon Walker and Michael Longfellow, but also more visibility for some returning and upgraded less experienced cast members. including the Johnson “twins”, Punkie and James Austin. 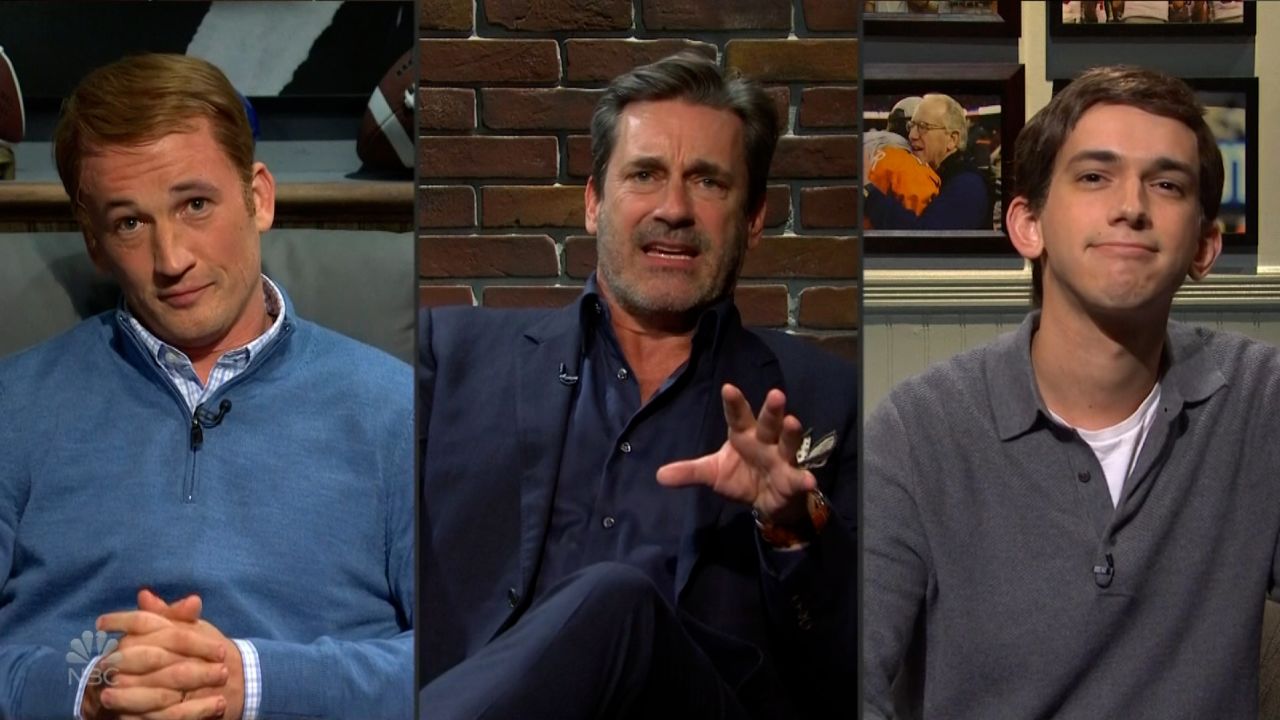 James is rapidly becoming one of the show’s more versatile political satirists, having taken over Alec Baldwin’s Donald Trump send-up with an even greater bite and range last year and being the focus of the new season’s cold open, one that poked fun at the show’s challenge for reinvention with a spot-on spoof of the Manningcast that also featured Jon Hamm trolling his TOP GUN: MAVERICK co-star, and the season premiere’s host, Miles Teller.   James, who also channeled President Biden last season, added his take on Mitch McConnell to his impressive repertoire, one that clearly gave justification to Trump’s classified him as an “old crow”, with a spot-on take that seemed to me like a cross between Foghorn Leghorn and Jimmy Stewart’s character in “Mr. Deeds Goes To Washington”–after Mr. Deeds had mistakenly ingested a few magic mushrooms.

And Punkie, newly upgraded to full cast status, also shone with an expanded role, evoking the range of Leslie Jones, with slightly less ear-splitting screaming.  On this show, as in life, Johnson and Johnson provided some necessary first aid.

This is the biggest turnover the show has seen since 1995, when 11 cast members from the prior season left, including such all-timer stalwarts as Adam Sandler, Al Franken and Mike Myers, not to mention a few one-season misfits who went on to later success such as Janeane Garofolo, Jay Mohr and Michael McKean.  But this year, as in that one, the constants included some strong returning cast members, including this season’s longtime Swiss Army knives Kenan Thompson and (as soon as her one-woman show end) and Cecily Strong, and, of course, executive producer Lorne Michaels. At this point, Michaels and 30 Rock are all that remain from the show’s inaugural season,  both revamped and iconic.  Michaels will forever be known as the inspiration for Dr. Evil in Myers’ AUSTIN POWERS movies, and considering he also produces NBC’s two weeknight late night shows, he is arguably the most valuable talent in Comcast’s family.

What Michaels realizes is that in order to continue to be relevant, one has to embrace change.  And live television, while it has its inspiration from the earliest days of the medium, is proving to be an even more valuable commodity in an era of immediacy that streaming now provides.  SNL is now seen live on Peacock as well as occupying the primetime feed on the West Coast (where it also continues to air in its traditional 11:28 pm slot).  And if one has phone in hand, as a large percentage of its viewers do, they’ll see live-tweeting and even breaking news reports in real time on sites as unusual as CNN Business giving details and, sometimes, even video clips of the proceedings.  Michaels and NBC ultimately must approve such practice, and in doing so have shown remarkable leniency that other shows seem hell-bent on embracing.  It is to their credit that by treating SNL as an event as much as a show, it has actually grown in stature, and continues to appeal to an even wider audience than it once had.  The show still often ranks as the highest-rated entertainment series on broadcast television among adults 18-49, even though virtually no one in that demo was cognitive enough to have watched those earlier seasons.

With a revamped logo, a newly produced open that thankfully eliminates the face diapers prevalent last season and some youthufl enthusiasm, not to mention the comforting return of longstanding co-anchors Colin Jost and Michael Che to Weekend Update, last night’s effort was. to be, far better than many had feared it would be.  With all of the hand-wringing about the departures of such versatile and click-worthy talents as Kate McKinnon, Pete Davidson and Aidy Bryant, there was concern this transition would be like the one seen in 1980, when Michaels himself left along with eight cast members including the show’s remaining original “Not Ready For Prime Time Players”.  That season featured ill-fated replacement players such as Charles Rocket, best remembered for uttering “f–k” on live national television before he went on to voice Roger Rabbit.

While little was seen of the newest players (though Longfellow’s turn on Update as a suffering son of an Arizona right-winger was quite funny), the returning cast, especially those now being given more runway, is far stronger on the whole than the one of 1980, and has the potential to eclipse that of 1995’s.  It’s important for SNL to be as broad as possible, given its unique position as both icon and clarion, particularly in the polarized world we live in today.  Sales demography aside, it’s still appointment television for those who were old enough to remember its heydays, myself included.  And since, like all late night television, we can choose to watch on our phones the next morning, versatilty will assure its opportunity for longevity.

There are already rumors that the show is heading for its final seasons, with Michaels approaching 80 and the golden anniversary two years away.  I’d like to offer that with the continued approach of evolution and revereance, as well as an open-door policy on distribution and consumption, the show has a lot more mileage left on its engine.  As long as there are funny people with a voice, there should be SATURDAY NIGHT LIVE.

Just don’t cast anyone like Cbarles Rocket ever again.