Earlier this week, it was suggested to me by one of the few friends that still seem to make time to even talk to me that I should consider writing a book.  His belief is that a focused, singular work could make this brand a bit more sticky and established.  His opinion was an outlier compared to the naysayers that have suggested otherwise, but he reminded me that people do write them and many still read them.

So I’m studying a few examples of people I actually know who have written them to see what they do, how often they have done it, and what particular niche they have carved out to make them more prolific.  My timing was excellent, as one such person issued his fifth work and his fourth in the category of biography of classic quiz and game show emcee.

You probably know this is a genre that I’m a bit more knowledgeable about than most, and indeed got the chance to live a dream by successfully programming a network fully dedicated to it to what is to date its greatest annual profits and some of the largest audiences it has seen before or since my stint.  I do pride myself on being a conduit between the past and the present, as well the somewhat naive desires of a small subset of passionate fans to see every ancient work ever produced that can somehow be exhumed, viewing quality be damned, and the realities of the demands of a corporate owner determined to maximize profits and therefore devote as much specific analysis to every move as a “real” network strategist would to the acquisition of major movie titles.  I know I did a damn good job at it, regardless of the parochial myopia my superiors chose to ultimately judge me on. 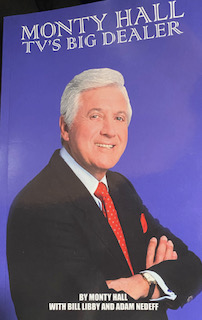 So when I find someone who really knows a lot more about this world than I do, and can demonstrate time and again how much he does and why–and is clearly not old enough to have personally lived through it–I find such a person a joy to experience and a fountain of knowledge.  Adam Nedeff is one such person.

His latest tome, MONTY HALL: TV’S BIG DEALER, was just released, and is more of a collaborative effort than some of his past biographies of luminaries of earlier eras such as MATCH GAME’s Gene Rayburn and the original PRICE IS RIGHT’s Bill Cullen.  Hall, the famed creator and longtime host of LET’S MAKE A DEAL, is technically the author, as this work updates his earlier autobiography, written with the help of journalist Bill Libby,nearly a half-century ago and concurrent with the tenth anniversary of the iconic show that at the time was arguably at the peak of its popularity and impact on pop culture.  But make no mistake–Nedeff’s unique ability to seek out previously unknown nuggets about personalities we (well, I) thought we already knew everything about is unparalleled.  His tenacity and ability to elicit new information is reminiscent of the likes of more prominent authors such as James Poniewozik and Tom Shales, both respected TV critics and writers for legacy publications. 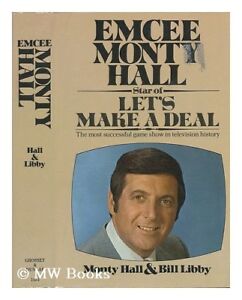 By updating Hall and Libby’s 1973 work, EMCEE MONTY HALL, with new interviews from many of those quoted in the original work, including two of Hall’s children (both talented producers and creators in their own right), and chronicling the balance of Hall’s life until his death at age 96 on Yom Kippur 2017, Nedeff achieves Hall’s desired goal to tell a more complete story of his life, feeling in hindsight that the previous effort may have been premature.  Indeed, in the 44 years that Hall lived beyond that writing, he accomplished a lot more in a partial lifetime than many achieve in a complete one, and arguably left a greater legacy than merely offering costumed contestants the chance to win a Pontiac Grand Prix ever did. 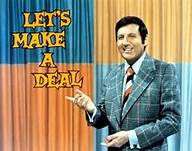 LET’S MAKE A DEAL has been successfully revived on four different occasions and in a couple of weeks it will be sixty years since its original NBC telecast.  Its most recent revival, now a CBS staple hosted by Wayne Brady, has now lasted longer in network daytime television than the original version did, and shows no sign of stopping anytime soon.  Monty was able to return to the latest version of the show on a couple of occasions, giving the multitalented Brady his personal stamp of approval and filled in as emcee at an advanced age to an even more heartwarming and skilled level than did Bob Barker when he guested on Drew Carey’s PRICE IS RIGHT (and wasn’t hocking a book in the process).

But what we learn about Hall as a humanitarian and a man was arguably all the more reason that this book was worth the investment.  Hall emceed countless fund-raisers and telethons for the likes of Variety Clubs and Easter Seals, raising billions of dollars for worthwhile causes.  He was a proud Jewish man, father and grandfather, and while his personal wealth ultimately reached many millions he and his wife of 70 years Marilyn (who predeceased him by only a few months) lived in the same large but eventually unspectacular Beverly Hills home they purchased soon after LMAD was established until their deaths.  Their children talked with both pride and a smidge of lament on his generosity to others but his frugalness as a parent.  (Please don’t worry, they and his beloved grandchildren are more than taken care of).

By choosing to be as busy and prolific beyond the camera as he was in front of it, Hall indeed left a legacy.  Nedeff’s second half contribution to this book is called CITIZEN MONTY HALL, and indeed we learn about his true passions, as well as his opportunity to ultimately reconnect with producers and networks he believed wronged him earlier in life.   He worked for Mark Goodson even after he realized one of his creations had been stolen and turned into one of their more enduring titles (you’ll have to buy the book to learn which one), and he ultimately returned to the NBC network he left more than two decades earlier to host an ill-fated revival that was ultimately sabotaged by too many cooks in the kitchen with partners like Disney.   That’s Adam’s homework that told those stories, BTW.

Adam is also working on a project that will ultimately give a physical home to the relics and personalities of the genre, along with two veteran producers who have convinced the Strong National Museum of Play to expand their parameters to open The National Archives of Game Show History, expected to be completed by early 2025.  For these producers, it is allowing them to indeed create their own legacy while honoring those of the talents that provided them with their careers.  I would contend Adam is carving out his own legacy at a much earlier life stage.

I’ll also take this opportunity to tell you that Adam’s talents also provided me, along with many others trapped in our homes, a pandemic lifeline on a near-nightly basis.  Bringing together a uniquely passionate group of fans from all over North America, some who had lived elsewhere and fluently spoke foreign languages, we gathered like clockwork at roughly 8:30 PM Eastern nightly to have a virtual game night with elaborately staged and technologically enhanced competitions involving his extensive collection of home games spanning nearly seven decades.  We not only enthusiastically played home versions of long-forgotten shows, we also played recreations of Japanese and French Canadian formats we mere English-language speakers never knew existed.   I learned there were websites that would sync with your computer to turn your keyboard into a jump-in buzzer.  I learned new ways to utilize text messaging that I’m sure even Apple engineers never foresaw.  And we’d play deep into the night, knowing full well there wasn’t much else on real TV on to keep us entertained, and in my case provided a necessary diversion as my personal life crumbled.

So as we celebrate the legacy of TV’s BIG DEALER, we should also celebrate the legacy his writing partner is establishing in his own right.  Respect the legacies of others he is helping to shape.  And toast his unique ability to bring people together at a time we all arguably needed it, and miss greatly as the rest of the world gets back to normal.

If you have a few bucks to spare in this holiday season, I’d merely ask that you consider buying this book, available on Amazon and through BearManorMedia.com, or perhaps one of Adam’s earlier works.  Since I can’t afford to pay him back these days in a manner other than this review, I’m hoping you might put a few bucks in his pocket by treating yourself or a fan to his latest work.  )And, if you’re really in the holiday spirit, you can click on the link below and perhaps throw me a lifeline, too?)

Most of all, I’m hoping you join me in praising Adam for his work, and especially the legacy he left by bringing fans together when we had few other alternatives, and help me let him know I’d give anything to be able to see him in person again and thank him properly.