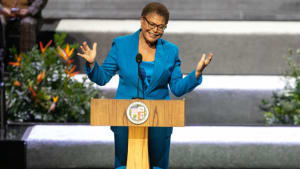 So Los Angeles now has its first female mayor in its history, and only its second African-American leader.  The first returned the Olympic Games to the city and had the international terminal at LAX named after him,  The second took office Sunday afternoon and will immediately be presiding over a series of seemingly interminable construction and restoration projects her predecessor initiated centered around the Olympics’ return to the city in 2028.  And based upon the attention and guest list that showed up for the swearing in ceremony, Karen Bass supporters may believe she’s on track to get the whole airport renamed for her.

Bass’ ascension to the leadership of America’s #2 city now means each of the top three cities in the U.S. now are being run by African-Americans, and naturally there is much fanfare and buzz about this,  And Bass is taking over a city whose city council is currently in disarray, with racial tensions between Latinos–who represent nearly half of the constituents that elected her–and Blacks inflamed in recent months, which was reignited just a day before Bass’ coronation with a melee erupting at the mere presence of Kevin DeLeon at a tree-lighting ceremony that has prompted a new set of divisive rhetoric between those that are demanding his resignation for his comments regarding a council member–and one-time Mayoral candidate–and his adopted Black son. Since I’m neither Latino nor Black, I have to defer on this issue, but suffice to say Bass is stepping in at a rather incideniary moment.  With a beaming Kamala Harris (well, since she chose to wear a mask, we can only assume she had a smile on her face, but her eyes were radiant) watching her onetime rival for Joe Biden’s VP slot take the stage, Bass immediately declared a state of emergency on homelessness–in a location that her team needed to clear out dozens of people who were living in tents during a driving rainstorm so as to create a coronation stage worthy of the majesty of her ascension.

As Linh Tat of the Los Angeles Daily News reported yesterday, Bass is wasting no time in issuing declarations of delivering on promises she guaranteed in her mayoral campaign:

As her first act as mayor of Los Angeles, Karen Bass on Monday, Dec. 12, declared a state of emergency on homelessness, delivering on a promise she made on the campaign trail to treat the city’s homeless situation – which she called a “humanitarian crisis” – with urgency starting Day One of her administration.

By declaring a state of emergency, Bass and her administration can more aggressively confront roadblocks that have hampered or delayed efforts to address homelessness, fast-track the process for getting more housing built, and allow Bass, as director of the city’s Emergency Operations Organization, to coordinate a citywide response to homelessness.

Her administration will be able to remove rules and regulations that prevent or delay the construction of permanent and temporary housing for those living on the streets, expedite contracts that prioritize bringing homeless individuals indoors, and clear the way for the city to acquire rooms, properties or land to house Angelenos.

This sounded an awful lot like the rhetoric and “transparency” that Bass would offer up once a month on her town hall conference calls, which like clockwork would autodial me at 7:30 PM once a month on my landline.  More often than not, Bass would be the only caller ID we’d see all week on that line.  It was my first awakening that I was a Luddite for even having a landline at that point.  But it did allow me to multitask while Bass would pontificate on all she was doing to improve her Culver City constituency’s way of life.  For nearly an hour, she’d drone on, and then inevitably have one or two “random” calls supporting her efforts.

While all of this was going on, Bass came under considerable attack for the political favors she reportedly took, including a scandal that took out longtime Los Angeles politician Mark Ridley-Thomas and former USC dean of social work Marilyn Flynn.  As her opponent Rick Caruso amplified in the expensive and bitter recent election, Bass received the same full-tuition scholarship from Flynn–worth a reported $100,000–as did Ridley-Thomas.  As Matt Hamilton of the Los Angeles Times reported earlier this year, there were indeed strings attached:

When jurors ultimately decide whether to convict Ridley-Thomas and Flynn, prosecutors have indicated they want Bass’ relationship with USC, the largest private employer in her congressional district, to inform their verdict.

By awarding free tuition to Bass in 2011, Flynn hoped to obtain the congresswoman’s assistance in passing coveted legislation, prosecutors wrote in a July court filing. Bass later sponsored a bill in Congress that would have expanded USC’s and other private universities’ access to federal funding for social work — “just as defendant Flynn wanted,” the filing states.

There is no doubt that Caruso will double down on his continued efforts to tie in Bass into the Flynn and Ridley-Thomas case corruption case. But Bass is not under investigation, she went through the proper channels and asked the Congressional Ethics committee for a waiver to accept the scholarship, and it was approved. This is all a manufactured scandal with half-truths being told by a desperate Caruso campaign grasping at straws in their efforts to confuse voters who do not have time to read and investigate candidates on their own.

Certainly, Caruso was politically motivated.  But a more even-handed recap of Bass’ history in Sacramento as California Assembly Speaker written by Politico’s David Siders  and Christopher Cadelago points out that perhaps Bass isn’t quite the saint her supporters believe she is:

Karen Bass was speaker of the California Assembly when a Republican lawmaker in 2009 was caught on a hot mic boasting in lurid detail about an affair he said he had with a lobbyist — right down to her “eye-patch underwear.”

Bass stripped the lawmaker, Mike Duvall, of his committee assignments and called for an ethics probe. But after he resigned she dropped the investigation, calling for a more general review of lobbyist-lawmaker relationships.

In Sacramento, she is remembered neither as the radical that her opponents have made her out to be — nor as a crusading reformer.

She raised money from corporate interests. She granted pay raises to legislative staffers amid a devastating economic crisis. And, as leaders of the state Assembly before and after her did, Bass oversaw a legislative body with a history of debauchery that would not come to a head until nearly a decade later with the #MeToo movement. 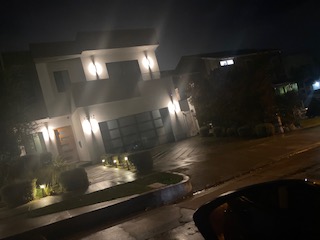 Well, again, all of that didn’t involve moi.  But my own personal experience with Bass involved her support of McMansioning throughout my Culver City neighborhood, including a clearly illegally erected three-story palace that was shoehorned onto a lot that once occupied a small one-story cottage surrounded by an ample front and backyard.  When the elderly owner next door passed away, her family sold the property to a wealthy, arrogant family who bragged to our neighbors how they used their influence with Karen Bass to circumvent the potential violations their “rooftop deck” could have been cited for.

All it did was inflame my partner’s vitriol that her precious sunbathing time by our pool was forever compromised by the erection of this monstrosity, and a  nonstop barrage of snarky requests that I ask personally lobby Bass to shut the construction down, or perhaps use my employer’s infleunce to do so.

So as Bass often requested during her town hall calls, I left voicemail message after voicemail message, from home landline, cell phone and work phone, in the hopes of getting an audience with her to discuss our concerns.

Would you be surprised that I never heard a single word from my elected official, nor anyone from her office?

So maybe I’m just a bit dubious that when Bass talks the talk, her history of walking the walk for those who don’t directly kiss her ring, or represent a constituency that has political advantages for her to appear like a savior, leaves a bit to be desired.

Well, Miss Mayor, let me update you.  I no longer have the house or the partner that insisted I barrage you with requests.  And I’m scarily a lot closer to being in need of your homelessness services than I’d like to admit.  No, I’m not the face of those ahead of me in line, nor the ones you already usurped with your swearing-in ceremony.  But, sadly, I’ll compare bank accounts with any of them this morning.  I’m ashamed to admit they’re probably in better shape.

I’ve already lost a couple of friends who can’t believe I’d dare question Bass’ potential to be a rock star.  That I’ve somehow fallen down the rabbit hole of supporting far-right conspiracies.  How tragic, they say.   When I remind them of my personal experience driving my opinion, it’s dismissed as quickly as Bass dismissed the contentions that her USC degree did not have any strings attached to it.  Chalk it up to yet another loss of what I once had, I guess.  After all, few people believe I deserve anything these days, even empathy.

So Miss Mayor, prove you’re not just another Karen.   Prove you’re gonna do something for once.  Prove that you’ll include people like me in your plans.  Once you do that, I might be a tad more supportive. Until then, I’ll simply have to conclude that until further notice this fish stinks from the top.