On a December Sunday filled with football and latkes the best news I saw yesterday was the announcement that, nearly 60 years after he retired and nearly 50 years after he died Gil Hodges is finally, finally going to be immortalized in the baseball Hall of Fame.

As a Mets fan who came of age with the 1969 Miracle Mets that he managed, Gil Hodges will always be a transcendent father figure who will forever hold a special place in my heart as someone who took over a ragtag last place team and within two years instilled discipline, culture and acumen that produced arguably the most shocking World Championship in sports history, 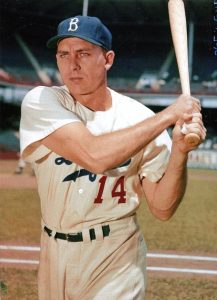 As the son of a Brooklyn Dodgers fan who idolized Hodges the player in his youth and provided the bridge for one of our stronger parent-child connections Hodges meant even more to me.  Dad and I shared a hero, and therefore when he tragically dropped dead after completing 18 holes of golf on April 2, 1972 at the far too young age of 48 it was at that point one of the saddest days of my life.

I had not yet lost a parent or grandparent and even had a great-grandparent who was still alive.  Death was, thankfully, still a stranger in our house. Devoid of any more personal loss to that point, I felt it necessary to run out and buy a condolence card for Gil’s family.  I followed the suggestion of the New York Post and sent the card to the Brooklyn funeral home where Hodges’ memorial service was held.  I had sent “fan mail” before and had never heard back from anyone at any point previously.

Early in May I got a hand-addressed envelope from a strange address in Brooklyn.  My bar mitzvah was coming up–maybe it was a relative who might offer me a savings bond?  Nope, it was far better.  It was a hand-written note, on a card with the Catholic prayer for the dead written on it, personally thanking me for taking the time to express my sympathy.  Signed, Mrs. Joan Hodges.  Gil’s widow.

I treasured that card for decades.  Dad and I would look amazed at it, believing that it might be worth something down the road. for surely Gil would be immortalized.  After all, he retired as the most prolific right-handed home run hitter in National League history as well as being arguably the most impactful rookie manager in baseball history.  But as the years went on, inexplicably Hodges never got the call from the Hall.  I moved to Los Angeles.  The card was lost.  Dad passed.  Hope had almost been as well.

A couple of years before my Dad passed I had the opportunity to meet Jerry Lewis, whose son is a friend of my wife’s.  He took all of us to a baseball game in San Diego where we sat in the owner’s suite.  Lewis had a tumultuous relationship with his son and was that night as surly and as off-putting as he was frequently reported to be.  But my wife had dated his son years earlier and he somehow had a soft spot for her.  My reward was not being immediately hated by him.

We made some small talk about the industry.  He seemed bored by my industry stories, quickly reminding me that he invented the editing process for four-camera television production, which far transcended any of my accomplishments.  Then we started talking baseball–he asked me if I had ever heard of his favorite player, Gil Hodges. 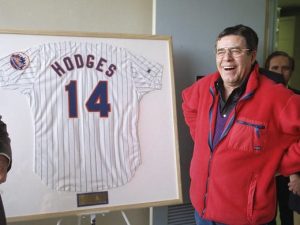 I told him the story about Joan’s thank you note.  He was clearly moved.  He said he and Joan were still in contact and that he would share that story with her.  I never did hear from her, and Jerry’s gone now so I won’t really know if he ever did contact her or not.

But Joan’s still around, 95 years old and still living in Brooklyn.  Still around to know “her Gil” has finally achieved immortality.  I plan on contacting her with this Le Blog after the likely onslaught of good wishes from people she actually knows calms down.  Thanks again, Joan, for being the first person of some fame to reach out to a fanboy.  Thanks to giving me the gift of hope.