Former Disney chairman Bob Iger was the featured interview at the Code Conference yesterday in sweltering Los Angeles, and he made headlines with even hotter takes about the future of the entertainment industry.  If you haven’t yet digested his takes, prodded by the brilliant tech/media savant Kara Swisher, I strongly encourage you to do so.   Short strokes, he was bullish on the future of streaming services, particularly ones with advertising, while very bearish on the future of traditional media—both linear television and theatrical distribution. 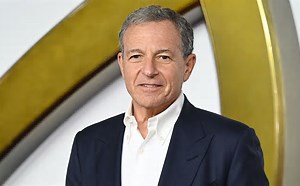 As someone who led ABC and ESPN to profit and prominence, and who also was at the helm when the first distribution deals with Apple and the first content deal with Netflix were consummated , Iger is as auspiced as anyone on the planet when it comes to prognosticating.  He specifically cited the upside of Disney+ (perhaps a bit parochially?) and Netflix as they prepare to enter a marketplace that continues to expand that will add millions of saleable impressions as these two leaders prepare to make some portion of their industry-leading subscriber bases available.

Both companies have the opportunity not only to expand the media marketplace, but also have the opportunity to be more transparent, forthcoming and innovative with how information on their actual audiences is released.  In recent days, Amazon Prime Video has been particularly coy in how their two massive investments, LORD OF THE RINGS: RINGS OF POWER, and THURSDAY NIGHT FOOTBALL, have performed, both with viewership and, in ROP’s case, sentiment.  Every media company seeks to present their product in the best possible light; that’s just intelligent business.  But Amazon’s latest attempts to put their best foot forward are causing backlash from both consumers and competitors that are both atypical and justified. 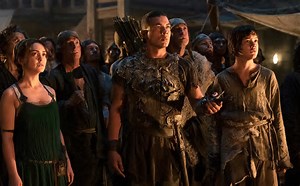 Amazon earned kudos and headlines when they announced that the first two episodes of RINGS reached 25 million people around the world in its first day of release, breaking a previous policy where they did not release any specific viewership data.  The spin was to underscore that it had a substantially larger audience that the premiere episode of HBO’s HOUSE OF THE DRAGON, which per their data reached just under 10 million people in its first several days.  Big win, right?  Well, perhaps.

DRAGON’s data reflected U.S. audience only, which begs the question of how many of RINGS’ 25 million viewers were in this country.  For a property whose theatrical and IP legacy has been steeped in its appeal beyond our borders, that’s more than a fair question, one that Amazon has so far chosen not to answer.  And it has not been shy in proclaiming that it was “breaking all previous records, marking the biggest premiere in the history of Prime Video,” as reported by THE INSIDER.  But per the same article,  Amazon did not say how this compared to other shows on the platform, The Wall Street Journal reported.

What we do know is that RINGS has been “review bombed” by a large number of people (or a small number of aggressive people with multiple accounts), mostly responding to external issues rather than the episodes themselves.  As Tom Llewellyn of HITC reported: 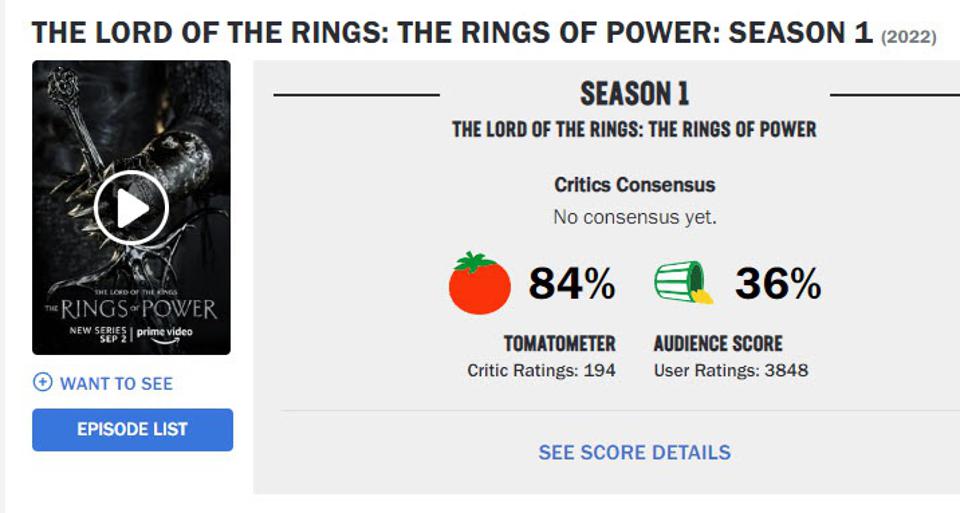 The series has already experienced widespread ‘Review Bombing’ across the majority of aforementioned user-based feedback websites including IMDB, Rotten Tomatoes and MetaCritic. The show is currently featuring the following scores:

There have been conversations surrounding diversity in The Rings of Power; however, the majority of the review bombings instead focus on the style of the show and the performances of the cast.

“That’s something of a problem, in so far as the series has been targeted pretty heavily over the last several months by both skeptics and outright bad faith arguers, with the latter seemingly deeply incensed at the show’s inclusion of Black actors playing elves and dwarves within its cast.” – AV Club.

These opinions began as a reaction to the numerous trailers and ubiquitous advertising the $715M gambit as seen ahead of launch–which Amazon has spent hundreds of millions of dollars in external media and devoted massive amounts of corporate cross-promotion to making sure it was received.  But it’s hardly the zeitgeist ROI Amazon desired.  So, in an even more draconian measure, again per HITC:

In response to The Rings of Power’s ‘Review Bombing’, Amazon Studios have taken the drastic step to actually suspend the rating system on the series’ streaming page.  An inside source from Amazon Studios told The Hollywood Reporter that “reviews are being held 72 hours to help weed out trolls and to ensure each review is legitimate.”

Amazon has also not been forthcoming with the data on its first Thursday Night Football telecast.  A pre-season game  reached more than 1 million viewers, per the limited information Amazon released.  But Amazon, much like the practice of earlier cable deals, is supplementing its coverage with linear and over-the-air  availability in the home team’s markets.  And as TVB noted, nearly half of its audience was watching that way: 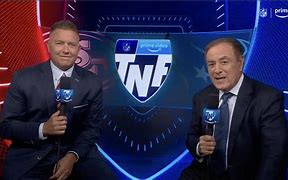 The importance of linear availability is actually supported by the most recent data dump on this weekend’s HOUSE OF THE DRAGON episode.  As Variety! reported, HBO is now spinning a less complete narrative: Episode 3, titled “Second of His Name,” was watched by 2.5 million people across its four cable airings on HBO on Sunday, per Nielsen — one million fewer viewers than Episode 2.

It’s important to note that this total-viewer tally refers only to the number of people who caught the episode on the HBO linear channel as measured by Nielsen, because Warner Bros. Discovery declined to share internal streaming data from HBO Max for “House of the Dragon” Episode 3 — though the company did report that viewership after the first two episodes.

Nielsen’s linear data states that “House of the Dragon” viewership jumped from 3.2 million with Episode 1 to 3.5 million to Episode 2 — a 9.4% increase — before this week’s 28.6% decrease.

When combining Nielsen’s cable numbers with WBD’s HBO Max viewership, Episode 1 drew 9.99 million viewers in its first night while Episode 2 was watched by 10.2 million, a 2% increase.

What this data does tell us is that the contribution of linear delivery to the overall audience for DRAGON increased from EP 1 to EP 2.  It would stand to reason that its reluctance to release data for HBO Max for EP 3 would indicate that digital viewership did not make up the difference this go-round.  And that the proportion of total audience coming from old school HBO was likely larger.

To further illiustrate that linear TV isn’t quite dead, let’s check back with our pre-season football world.  On Sunday the 28th, as Audacy Pittsburgh reported, a pre-season game airing on CBS (and, to be sure, Paramount+), got a far better reception than did Amazon’s game:

The Steelers last game versus the Detroit Lions was the most viewed CBS preseason game since 2013. The game averaged at 5.821 million viewers and peaked at 7.597 million viewers. (Via CBS)…The ratings come in just under the NBA’s all-star game from last season at 5.94 million average viewers. They also beat out each of the 5 NBA Christmas games from last season as well as MLB’s special Field of Dreams game. Now, to be sure, the Steelers used the game to determine who would succeed Ben Roethlisberger as their quarterback, a more compelling football storyline, to be sure,  But, respectfully, do nearly five million more people actually care if Mitch Trubisky or Kenny Pickett is under center this coming Sunday?

Amazon is reportedly guaranteeing advertisers in regular season TNF an audience of 12.5 million viewers.  That’s 25 per cent more than HOUSE OF THE DRAGON, and more than 1200 percent higher than a pre-season game.  For perspective, last season’s NBC SUNDAY NIGHT FOOTBALL package averaged an industry-leading 18.4M viewers.  NBC’s HALL OF FAME pre-season kickoff last month averaged 5.5 million viewers.  So to hit their estimate, Amazon will need a multiple of roughly 3.6x of the lift from pre-season to regular season with its games than NBC–which has late-season schedulng flexibility to ensure the most competitive games possible–saw.

Hmmm.  Maybe Amazon will need some big numbers from its distribution partners to come a little closer?

Before we bury linear TV completely, it might not be the worst idea for Amazon, HBO, or even the trade press to merely acknowledge that it’s still relevant and popular enough to matter to their business goals.    In Amazon’s case, their approach to releasing information is particuarly ironic, given that one of its most acclaimed series to date was actually called TRANSPARENT.

But that’s just my opinion.  Perhaps I should have waited 72 houts to share it?