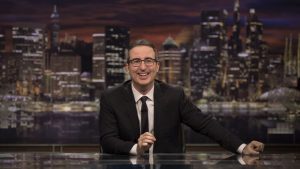 If like me you’re a devotee of The Daily, the Michael Barbaro-fronted weekday podcast from The New York Times, you know why the last five words are without separation.  That phrase is the semi-colon between the podcast’s signature main story, an extended interview or series of sound bites that delves into a major issue in detail, and the end of the podcast, where he briefly touches upon other headlines (which, of course, you can choose to click through the app eagerly throughout the day).  Barbaro’s unique speech pattern and his step-by-step, ask the right questions approach is both soothing and stimulating at once, like a verbal venti latte (often my drink of choice to accompany this morning ritual of mine),  I look forward to this podcast dropping, typically in the 3 or 4 am hour on the West Coast, if I’m awake (sadly, that’s often these days) or knowing it’s at the front of my queue if I happen to get a few more than 40 winks.

Discovering this podcast–one of the ten most-listened to in the United States, per Apple–opened me up to a generational choice atypical for mine but ironically reconnecting me to my youth.  As a boy, I never went anywhere, including my bed, without a transistor radio.  I voraciously consumed all-news radio, every live sports event I could get a signal on and, on occasion, music.   A smartphone has recaptured this versatility and through Apple Podcasts and Spotify has opened up an infinite number of new options going way beyond those standbys.

I absolutely love podcasts.   It’s an emotional addiction that I believe is both healthy and healing.  Having a constant companion of sound and entertainment assures me that despite intense bouts of physical isolation there’s an ongoing “conversation” that I’m a part of.  Thanks to my waterproof, wraparound headphones (Aftershocks!!) I can take this party on long walks, runs, bike rides, car rides and even my showers.  I’m never without headphones these days–lightweight, Bluetooth-enabled, and allows me to consume far more content via my ears than I ever could with my eyes. 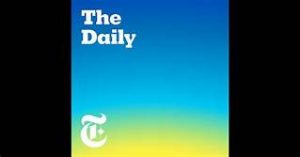 Discovering The Daily has connected me with many of the other New York Times offerings, including The Argument, Sway (Kara Swisher offically qualifies as the most informed tech reporter in America in my book), The Book Review, The Ezra Klein Show , Sunday Read and my personal favorite, Modern Love, which often is the weekend morning compliment to The Daily and never fails to make me cry.  I love them all.

I’m also a major fan of everything from The Ringer, Bill Simmons’ impressive array of witty, informative extended interviews and ramblings, primarily on sports but also crossing over into pop culture.  My personal favorite is The Rewatchables, a weekly banter between Simmons and several of his contributors that treat a film club assignment (typically an iconic Netflix staple from the mid-eighties to the mid-oughts) as a sports scouting assignment.  Some of the “award categories” include “Who Won The Movie?”–which role overachieved with what they were given, “Apex Mountain”–which actor or element of the movie represented the crest of their respective career–and “What’s Aged the Worst?–picture a debate about something “in the moment” in fashion, style or popularity that is now relegated to obscurity or irrelevance (AOL IM in “You’ve Got Mail”, e.g.).  I’ve also come to love Ryen (yes, that’s how he spells it) Russilo’s bi-weekly contributions, particularly his “life lessons” , where he offers friendly advice to well-intentioned but clearly oversexed bo hunks trying to do the right thing with roommates, girlfriends and family members typically reluctant to share that side of themselves in their hedonistic worlds.  I submitted my own situation as a suggestion; as someone twice the age of the typical contributor I doubt I will.

I also realized that while you’re moving around the house or outside you can also listen to You Tube audio.  The HBO commentary shows from John Oliver and Bill Maher are go-tos, as are segments from Stephen Colbert, Seth Meyers and The Young Turks. Oliver is a particular addiction; I literally (lit-trilly, as JO’s British accent pronounces) can’t get enough of his insights and exasperation.  I often let the queue continue down a rabbit hole into four and five year old episodes that highlight his takes on the early days of the Trump administration, where he foreshadows the chaos of the last twelve months and had a wild studio audience as a backdrop to boot.

When I do finally choose sleep (or it chooses me)there are extended music blocks that also work wonderfully.  My beautiful new friend has reintroduced me to binaural music, the soothing tones that typically accompany a spa treatment.  I’ve recently added a battery operated eye massaging mask to the mix that blocks out ambient light; the combination of these two stimulations have produced deeper and healthier sleep than any medication has created in decades.  And here I am, yet again drifting off with audio in my head, comfort in the dark (physical and situational).  The smartphone is the descendant of the transistor radio, and I rarely have to worry about the battery running down overnight.  I’m never without the ability to learn, and I never have to experience silence.   Leblanguage has a 24/7 window.

And yes, when there’s a game on that does supercede any of the other options I’ve discussed and recommended. Some habits die harder than others.