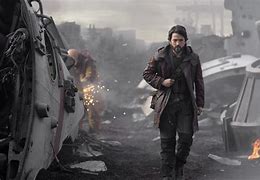 You really didn’t think Disney+ was going to sit idly by and let their competitors at HBO Max and Prime Video respectively be the only ones using brand extensions of successful scripted fantasy franchises to battle for eyeballs and relevance, did you?

They just waited for the dust to settle, for the respective seasons of HOUSE OF THE DRAGON and RINGS OF POWER to launch and leave the daily news cycle–heck, lately we don’t even see headlines of favorable reviews of newly available episodes, let alone reports on any audience growth or decline.  That said, this would seem to be the perfect window of opportunity for Disney+ to fire its salvo, a prequel to  the STAR WARS: ROGUE ONE arc, and the fourth live action series to eminate from the SWU so far.

Early reviews are encouraging; per Forbes: 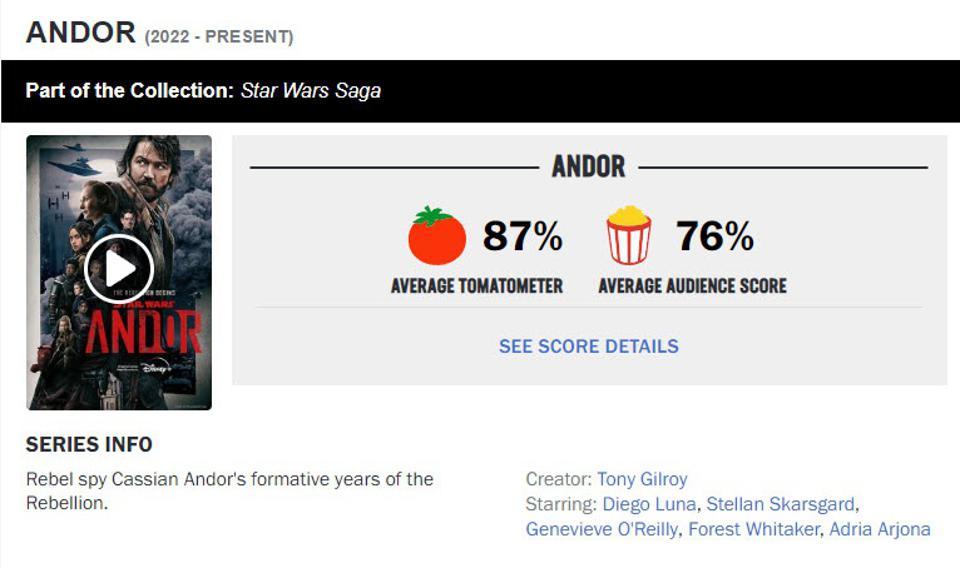 Andor is reviewing well so far, now that critic reviews have come in. Here’s how it stacks up compared to the other Disney Plus series we’ve seen out of the Star Wars universe so far:

All the more positive considering this is perceived as an executional departure from what many STAR WARS fans consider the “core franchise”.  Indeed, as Rick Marshall of Digital Trends noted, ROGUE ONE itself was seen as a departure, but one that had a decent pedigree:

Gareth Edwards’ Rogue One: A Star Wars Story isn’t the most controversial Star Wars movie ever made, but it still inspires plenty of passionate debate among fans about the place it holds in the beloved sci-fi saga. A gritty, standalone war story set in the period just before the events of Star Wars: Episode IV – A New Hope, 2016’s Rogue One was always a risky bet, but it was one that paid off as it became the third highest-grossing film in the entire franchise. 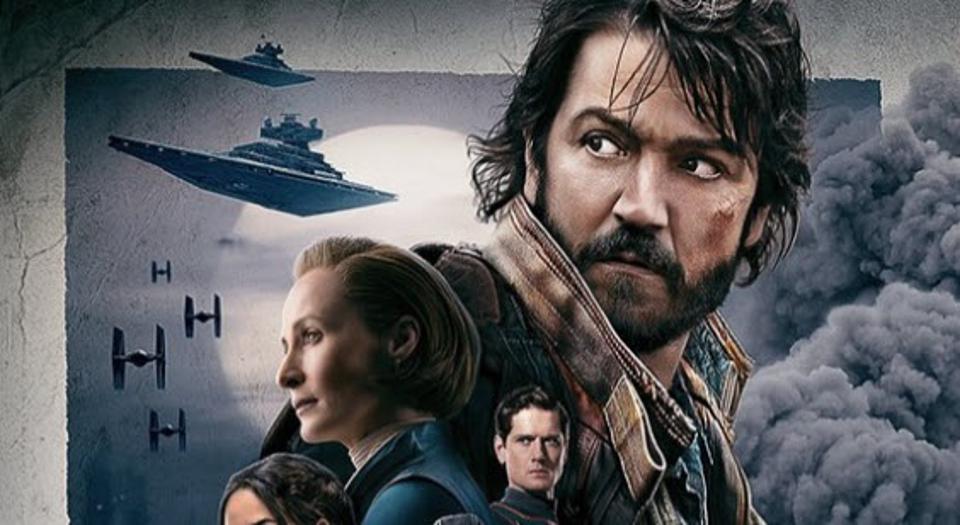 Now, the studio is doubling down on that bet with Andor, a prequel-of-a-prequel that explores the formative years of Diego Luna’s rebel spy Cassian Andor from Rogue One. And much like the film that inspired it, Andor delivers a very different — but welcome — Star Wars story with its simmering tale of espionage set in the early days of a galactic rebellion.

Created and co-produced by Rogue One co-writer Tony Gilroy, Andor isn’t the action-packed adventure rooted in franchise lore and packed with deep-cuts that Star Wars fans have come to expect with The Mandalorian, The Book of Boba Fett, and Obi-Wan Kenobi. Instead, the series offers a more thoughtful, slow-developing story about the conditions and events that led to the environment we’re thrown into in A New Hope, with a small alliance of rebels engaged in a seemingly un-winnable war to overthrow the Galactic Empire.

So for those who may be have been expecting another deep dive into a more familiar classic character, as the previous Disney + SWU spin-offs have been, this isn’t a pure merch and revisting play.  Based on the first episode I caught last night, ANDOR is darker and definitely more violent.  As Gilroy expressed in a thoughtful interview with Chris Ryan and Andy Greenwald on THE WATCH, people often forget about the WAR part of STAR WARS.  ANDOR probes that legacy with a grittier, more detailed exploration.  I come out much in the way that Marshall did after reviewing the first four episodes:

Projects such as the Star Wars: Visions anthology series and various canonical video games like Star Wars Jedi: Fallen Order have all proven there’s plenty of flexibility in the franchise as far as the stories and cast of characters it can encompass. Andor does something similar, and builds on the themes and tone that set Rogue One apart from other Star Wars films as it carves out its own, unique place in the Star Wars canon.

Whereas DRAGON and RINGS got out in front with late summer unfoldings and massive publicity campaigns, ANDOR has launched on the first day of autumn, head-to-head with traditional television’s gasp at a premiere week, and with a more controlled marketing push.  It’s clearly aimed at fans of those franchises who may already be looking for the next big thing to devote immediate attention to.  The lack of noise and news from those competitors’ camps would strongly suggest they are more in the lines of summer romance that tends to wane once the calendar changes.  There is likely a waning of viewership in the moment, with later episodes now “in the queue”.

Or it may that it will appeal exclusively to STAR WARS fans looking for a sign that that 45-year-old franchise hasn’t been completely forgotten by an MCU-obsessed studio.  To be a success these days, ANDOR will likely need a little bit of both franchise and broad support.  And being in the consideration set is just fine, as long as it keeps subscribers hooked.  Until Disney+ actually adds an AVOD tier later this fall, the end game is all about keeping people in the tent, not necessarily sampling anything from the buffet.

To that end, ANDOR is probably as well an AND as it is an OR.  Personally, I think it’s an AND/OR.  As long as it’s not “none of the above”, it’ll do its job.  And eventually, we might even find out exactly how well it does.

Now THAT would be a dramatic departure.