One of the double-edged swords of being a “seasoned” media consumer and observer is that when anniversaries are celebrated by more prolific and, yes, younger fans they wax nostalgic about wishing they had been around at the beginning of some show’s existence.  Since nostalgia conventions tend to be built out around IP of at least 20 years vintage, with opportunties for reunions typically observed at five-year intervals, I’m one of those that, more frequently than not, actually DOES remember the start, the circunstances surrounding deployment and development and can often provide context or a parable for fans to appreciate me just a hair. 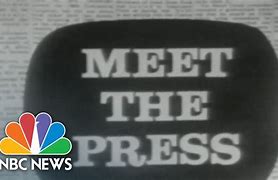 But, occasionally, there’s something out there that predates me.  None is more exemplary of that than MEET THE PRESS, which this weekend observed its DIAMOND anniversary as a staple of NBC.  That’s right, for 75 years, on any given Sunday morning, a moderator, a few guest jouralists and political newsmakers would gather in Washington, D.C. to address the concerns of a nation, the news of the week and offer spirited debate on what to expect next.  While CBS has had FACE THE NATION nearly as long (that premiered in 1954), and ABC emerged as a true competitor in the 80s when they plunked David Brinkley from NBC and remade their Sunday morning news program as THIS WEEK, MEET THE PRESS has consistently been the gold standard–and, even now, more often than not–the most-viewed, of this genre.

Since MEET THE PRESS typically aired as a lead-in for the NFL pre-game shows on NBC in the half-hour immediately prior (unlike FACE THE NATION, which typically aired earlier and would cede the immediate lead-in half-hour to local copycats), it was my dad’s default choice when we’d settle down to spend a Sunday afternoon alternately watching, snacking, snoring and arguing.  My dad loved politics but had little tolerance–or capacity–to grasp the issues in the manner they were being presented and discussed.  Whenever a particularly infuriating viewpoint would be uttered, he’d regress into a Tourette’s-like rant about “political hacks”, often regurgitating exactly what someone had just said with disgust, and making the experience uncomfortable for anyone who happened to be within shouting distance of him, which many Sundays was a three-mile radius. 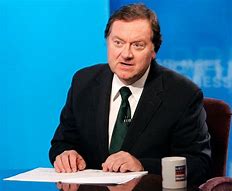 When I did venture out on my own, I was able to pay better attention and develop my own appetite.  I was especially fond of the show during the 17 years between 1991 and 2008 when Tim Russert hosted.  Russert, an affable, tough political reporter with an unbridled passion for his hometown Buffalo Bills, was beloved by both colleagues and guests, and even competitors.  His trademark greeting “If it’s Sunday, it’s MEET THE PRESS” became a clarion for knowing I was about to be educared, hopefully relaxed, and emerge a half-hour (later, an hour) later a lot smarter as a result of his questions and answers.   It was a welcome departure from the daysof the likes of Lawrence Spivak, the 60s-era moderator and one of the show’s original leaders, who more closely resembled an account than a street fugter.  Even my sardonic FOX colleagues respected Russert’s pugnacity, his style and, of course, his ratings.  When he sadly died not even 60 in 2008, it was a truly tragic event, but one that FOX saw as an opportunity.

But try as they did, even as MTP struggled with finding a new voice and leader, NBC has held on to its mantle, and under Chuck Todd they have again found a face and an attitude closet to the Russert legacy. And as they expand, like its competitors, into a digital-centric news model aimed at growing a new generation of viewers, MEET THE PRESS is as prolific as ever.   Like a hit weekly show from bygone eras, it has now expanded into a strip, airing daily at 4 PM ET on NBC NEWS NOW, often with Todd as the anchor (particularly in this emotionally challenging news cycle), but also building out a family of colleagues and newer names to supplement.   And as Stephen Battaglio of the Los Angeles Times reported this morning, it is bearing fruit and laying a foundation for the next 75 years.

“The trajectory of growth suggests (streaming news services) will be a phenomenal business in the months and years to come”, said NBC News President Noah Oppenheim, whose network added 200 positions last year to build up the division….We’ve been able to monetize advertiser demand because we can deliver eyeballs”.  NBC News says its service is averaging 34 million streaming hours a month a month in 2022, up 55% over last year, based on data from Comscore and other sources.

And those who do stream are overwhelmingly younger.  The average age of a NBC Nightly News viewer is over 65; the median age for streaming news viewers is under 40.  To them, Todd, and personalities such as Tom Llamas, Hallie Jackson and Joshua Johnson, are now a daily fix, not just a video Mimosa.  And will eventually be the faces of what is left of linear television; indeed Llamas, who anchors NBC News Now’s nightly prime time news, is the heir apparent to Lester Holt on that newscast once Lester steps down, reportedly after the 2024 elections. 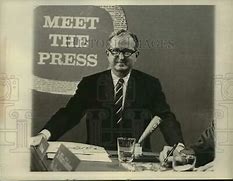 This past weekend, my digital feed had entire episodes from the Spivak era in queue, with the likes of a young John Kerry and Gloria Steinem being interrogated on issues like protests of foreign wars and women’s rights.  The rhetoric of today wasn’t quite as vitriolic then, but the intelligence displayed by both questioners and questionees was compelling, even decades later.

This week, said digital feed will often feature live updates from Todd and company, undoubtedly dissecting the results and, G0d forbid, the resulting turbulence of reaction to them.  It is likely to be a monumentally eventful week, possibly extending further, and if indeed democracy dies this coverage will serve as a time castle for future generations to look back on much as we looked back on MEET THE PRESS’ longevity and legacy over the last few days.

Becuase these days, if it’s Sunday–or Monday, Tuesday, Wednesday, Thursday, or Friday–it’s still MEET THE PRESS.   And that’s probably gonna be the case as long as there’s television–or days of the week, for that matter.  Assuming there’s still a world left in 48 hours or so.