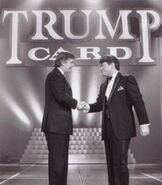 A good friend of mine pointed out that my recent Life Lesson that called Rupert Murdoch one of my “heroes” was, in her opinion, “unconscionable”.  Even though she conveyed her thoughts by text her anger was clearly evident and, frankly, justified.  She attacked Leblanguage at its core–say what you really mean, not what you think someone else thinks you mean.  So let me take a beat and attempt to explain.

Rupert Murdoch was not my direct boss, and the hand he currently plays in the misinformation and unapolgeticfear-mongering that his FOX News personalities foster are indeed unconscionable.  But he WAS a mentor, in an era where Donald Trump’s greatest sins were leading the United States Football League into premature extinction (point of information: the first pro football game I saw in Los Angeles was Steve Young and the LA Express) and helping perpetuate the game show Trump Card onto an unwitting industry (second point of information: every single promotional promise offered to potential licensors was never carried out on–prescient?).

And he IS a genius.  Launching successful insurgents against established media pillars takes money, guts and yes, intelligence.  I saw him launch FOX Broadcasting and was an eyewitness to a team he built that took 129 unaffiliated independent TV stations from non-existent to a number one network in young adults before the 1980s ended.  He launched FOX Sports and built another team that literally reinvented how sports was televised in the United States and was again the most-viewed and most-honored in its class.  Finally, he took on Ted Turner on his own level and not only knocked CNN off its perch as worldwide news leader but he also embarassed, exposed and ultimately excommunicated Turner to also-ran status, accelerating his career demise and ensuring that, unlike Murdoch, he is spending the last chapter of his life in near-obscurity.  Roger Ailes got the movie and the TV series accolades, but make no mistake that Murdoch is the ultimate puppetmaster, and when you have puppets like Ailes, David Hill and, for that matter, Trump itself that’s a far more formidable array of stuffed toys that Jim Henson ever created.

So yes, DB, you’re right.  Rupert Murdoch isn’t my hero.  But he is–and even at more than 90 years old still–a GENIUS.  And I’ll stand by that definition vehemently with this defense:  Hitler was a genius, too.