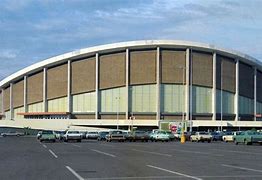 Nearly half a century ago, the first concert I was ever allowed to attend was Elton John’s Goodbye Yellow Brick Road tour at the then spanking new Nassau Coliseum on Long Island.  One of the few friends I had at the time (male, of course) took two buses, transferring and waiting in a drug den of a bus station in Jamaica, Queens, in wintry weather, the total roundtrip commute lasting more than six hours.  We didn’t get home until well past three in the morning and, sure enough, my mom was wide awake, angry beyond belief I hadn’t phoned (honestly, I didn’t have change for a pay phone, but that didn’t matter to her), and subsequently grounded me for a year.

But before that, I got to see the most exciting, electric outpouring of talent, glitter and emotion I had ever seen, and that includes the Rockettes’ Christmas show and the Amazing Mets.  It forever made me an Elton zealot, and fostered my desire to learn how to play the piano, which I regret to say I’ve never gone beyond a few lessons and barely qualify as a tinkerer.  But I marvel at Elton’s skills, and was therefore resolute that no matter what the condition of the world or my bank account was at the time tickets for this Farewell Yellow Brick Road tour went on sale last year, I absolutely had to buy tickets for it.   I had yet to identify who I would take,but I figured at the very least it would be a heckuva bargaining chip to snag a date. 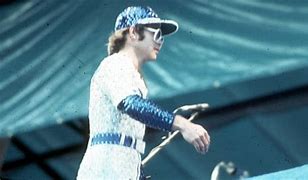 Well, I’ve been blessed with knowing an extremely wonderful and phenomenally beautiful best friend since, and it just so happens one of her two favorite performers of all time just happened to be Elton John.  Surely, I thought, this would be ideal for her to join me at.    But as the year changed and time went on,  and our respective income earning opportunties diminished and so many of my own never materialized, I had all but forgotten that the tickets I had purchased were somehow forwarded to an all-but-defunct alternative e-mail address of mine, so by the time I got an alert from the provider to my main address it was less than 48 hours before last night’s show.  Simply put, for me it was financially impossible for her to join me.  And with the price of gas and parking these days, it was a bittersweet throwback that for this last Elton John show I would again travel the same way I did for my first–via public transportation, and this time alone.

Yes, I couldn’t even get selling her ticket right.  As many of you are already acutely aware, extremely few people in my alleged support system live in this virus-paranoid city, and those that do seem to think I’m crazy to even think of attending an event like this.  So I tried to sell my digital ticket online.   Somehow, I fell down a rabbit hole of trying to get my ticket sold via Venmo to someone who responded to a Craigslist ad I had placed.  Back and forth  “we” argued about price, transfer portal and how Venmo “worked”.  You guessed it, it was a bot I was arguing with, a scammer, who nearly conned me out of a significant amount (to me) of money.   By the time this reality hit me, I was already halfway enroute and it would have been logitstically impossible for me to invite anyone else.

So, one again, the very act of seeing Elton John live was compromised by the crushing reality for me of simply having people in my corner who would support my passion.   But last night, as was the case lo so many years ago, the music and the concert was sooooo worth the suffering.  Please do not confuse any of the past few paragraphs with anything but gratitude.   Because last night, as then, was a celebration unique to a performer and humanitarian who crosses so many genres, generations and experiences. 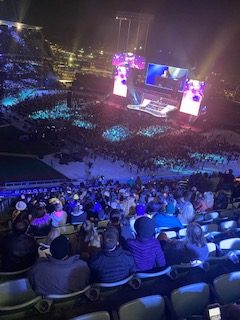 Virtually every song on last night’s orderly, modestly hyped playlist evoked some sort of emotional tie to a life event, and Elton, now 75, has had plenty of them.  The upbeat hope of PHILADELPHIA FREEDOM.  The inspiring tempo of I’M STILL STANDING.  The emotional roller coaster of YOUR SONG.  The eerie somberness of FUNERAL FOR A FRIEND.  The raw emotion and undying love expressed in CANDLE IN THE WIND.  And both the original version and the Dua Lipa-influenced mashup of ROCKET MAN that included her cover of it which went to the top last summer and endeared Elton to an entirely new generation of fans, virtually guaranteeing him immortality and endurance with the numerous Gen Z reprsentatives I saw swaying adoringly in the stands, along with many of their parents and grandparents who, like me, fell in love with him when we were their age. 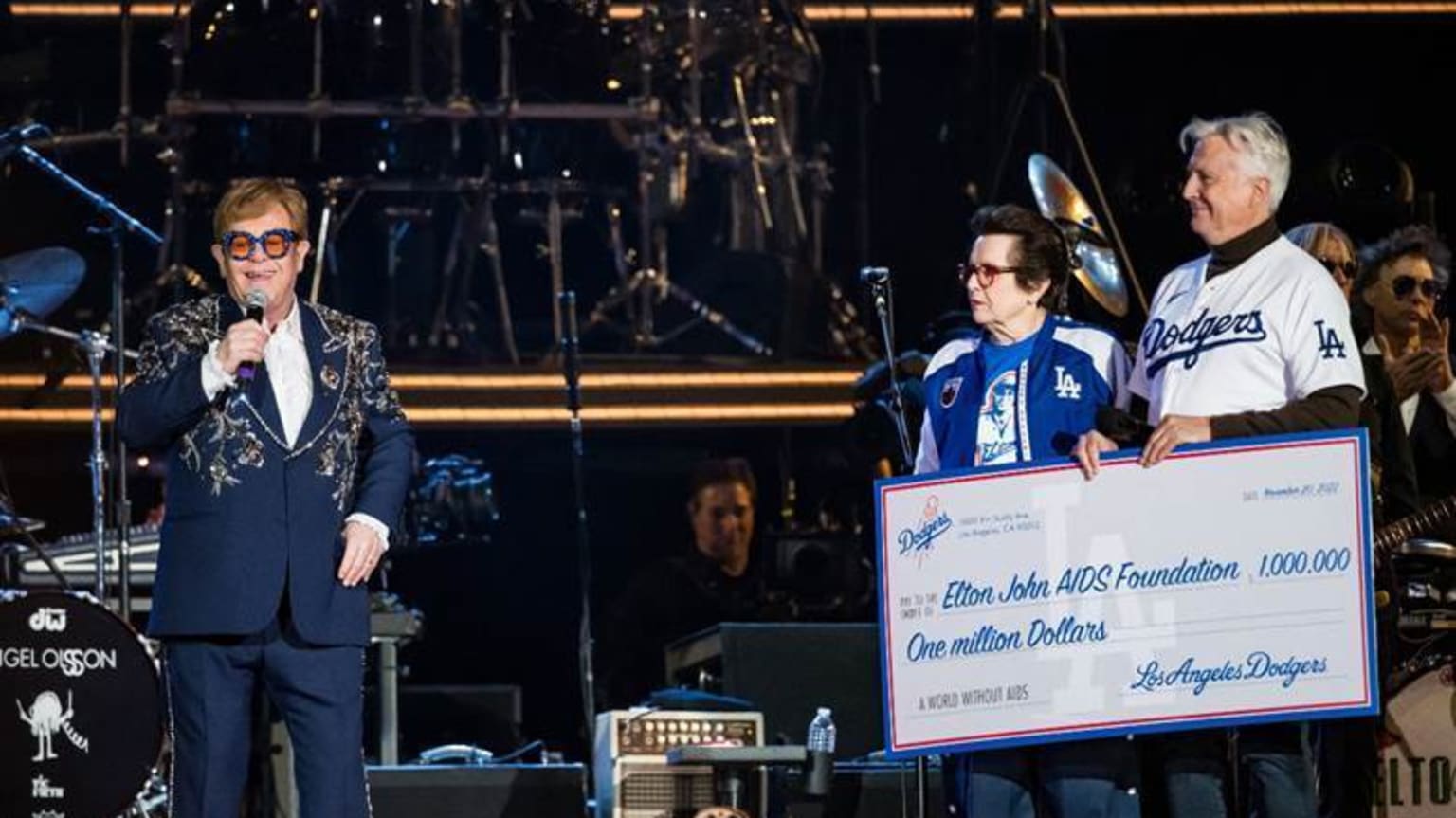 What was particularly awesome about the crowd that I was part of was that the joy and energy that was so prevalent transcended not only generations but backgrounds and lifestyles.  Not a MAGA hat in sight, and, thankfully, scant few worthless masks.  People singing and knowing the lyrics.  And for all the robust cheers they showered him with, the loudest were reserved for when Billie Jean King and Dodger principal Mark Walter surprisingly presented him with a $1M donation for the Elton John Aids Foundation, reinforcing that for all of his talent he is a humanitarian and philanthropist, and he reassured all of us that aspect of his life wasn’t about to change.

Now THAT’S why he’s been knighted.

When I purchased these tickets, it was assumed these Los Angeles shows, the final of which occurs tonight and will feature a worldwide broadcast of his encores live on IHeart Radio, would be it.  Turns out, it’s merely the last of his shows in North America.  There will be makeup shows from previously cancelled European and Australian venues this spring; the final shows now appear to be set for the UK.  It’s not likely I’ll be able to afford any of those, despite my burning desire to do so.

But as some newfound friends reminded me while I waited through what seemed to be an eternity to catch my ride home (and, yes, folks, I did indeed pay for a full ride back, because I was THAT emotionally spent and physically exhausted–sue me), he’s done farewell tours before, and if last night was any indication of how diminished his skills and passions are, we may be able to hold out hope for a few more at some point.  With the exception of allowing the crowd to take over the falsetto chorus of CROCODILE ROCK, and some lower ranges for the obvious encore finale choice of the eponymous song that references finally deciding his future lies beyond the Yellow Brick Road, there’s no question he has the capacity to fill a few more stadiums, hearts and souls before he’s done.

Daniel, if you’re still out there, star in the face of the sky, hear me and hear me good.  If there’s any chance of it, please find a way for me  to be at such an encore–or perhaps even one of the overseas ones already on the docket.  And please, please, please find a way to get my special friend there as well.  She needs to know why I’m crying tears of joy this morning. 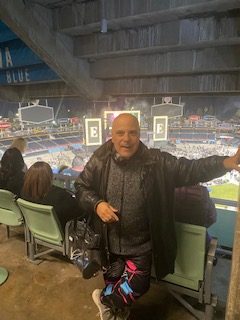