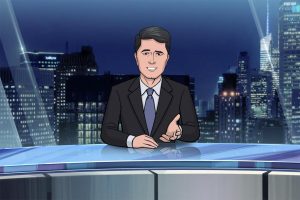 Yet another sleepless night on the edge of Culver City.  Thank goodness for Stephen Colbert, algorithms and the brilliant minds behind Paramount Plus’ (and, thankfully, You Tube’s) TOONING OUT THE NEWS.

If you haven’t yet discovered this wonderful wormhole, imagine if your favorite cable news channel was taken over by animated cohorts and given some of the most gifted topical satirists this side of THE DAILY SHOW.  Four nights a week, multiple segments of no more than ten minutes featuring cartoon anchors interviewing real-life politicians and pundits drop, featuring some of the wittiest rapid-fire banter on any platform and showing off the comedic talents of senators, congressmen and commentators–or at least their ability to keep from completely breaking up in laughter while they are being “grilled”.

What is even more impressive than the writing is the production itself.  Using motion capture technology, it takes real actors and mimics their wry bobbing heads and smirks onto instantaneously relatable and recognizable avatars.  I defy anyone with even a passing interest in the insanity that is our world to keep from doing at least one spit take when a panel lets out a collective “ewwwwwwwww” when one of its subjects has a particularly juicy take that would dare to insult some of the extremists on either side of the political aisle.  It’s as if “Mean Girls” (and guys) got their own nightly interview show.