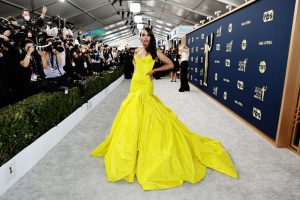 For the first time in far too long the entertainment industry held a good old fashioned fancy awards ceremony.  The 28th Annual Screen Actors Guild Awards were handed out last night in Santa Monica, with actual human beings wearing actual dress clothes on an actual red carpet and eating actual food which almost looked a grade above the rubber chicken I would choke on at previous ceremonies.  That alone was reason to be hopeful and celebrate the evening.

But when the dust settled the evening was downright historic.  If the night could be summed up in one word, the word would be INCLUSIVE.  A deaf actor won for Best Supporting Actor in a movie.  A movie featuring a cast primarily made up of actual deaf actors won the award for Best Cast in a motion picture.   A gay woman of color won for Best Supporting Actress in a movie where her costar won an Oscar in the same category sixty years earlier.  A black man who first came to prominence as a rapper in a kid-friendly NBC sitcom won Best Actor.  Two Korean actors won the respective Best Actor and Actress awards for TV series, for a show that was originally produced in a foreign language for a network outside of the U.S.  For an industry that fights so valiantly for representation and diversity to see it rewarded so equitably was moving.

What was even more remarkable was this was by far the most blurred media landscape in which these awards were presented and for the projects they rewarded.  Half of the movie–er, motion picture-winners were in vehicles released either exclusively or simultaneously on streaming services.  In a world where so many people inexplicably believe it’s risking your life–or at the very least financial solvency–to step foot in a movie theatre, particularly for works that rely on storytelling rather than visual impact, to be honored for those performances despite the “handicap” of being shown on a smaller screen was heartwarming.  It should give some reassurance to artists who lament streaming services as compromising their vision that technology has evolved far enough to no longer be worthy of such concern and exposes those who continue to press the issue as being driven far more by the perceived financial impact on the compression of a traditional theatrical window on their personal take than a statement on quality.   The fact that these were televised live on traditional TV networks (live on TBS and TNT) and also made available on a global streaming service (HBO Max) reinforced the blurring of those lines. 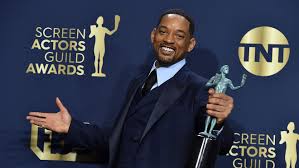 Oh, by the way, the whole affair was done in slightly less than two hours, and every significant award was shown.  As the Oscars grapple with their issues of what awards not to show so that they can perhaps end their telecast in less than four hours, they might want to take note that there’s a ceremony with NBA pacing (coincidentally shown on one of their flagship networks) rather than the pacing of a golf tournament.

The SAG Awards in particular are a venue where artists wear their pride on their faces.  The opening typically features well-known and working class actors introducing themselves, telling of their shared struggles in getting even their first roles, the benefits that the Guild has given their lives and their families’, and then proudly exclaiming “my name is ________, and I am an ACTOR!!!!”.  Lech Walesa nor Jimmy Hoffa never had such pride and solidarity in their lifetimes.

I briefly lived with one of those actors, and she often had friends coming over to help her audition for roles.  Whenever she would get mail from the Guild or need to show her card for insurance purposes, the smile that lit up her face was as radiant as any I’ve ever seen on any human being.  Fellow performers would gush over how wonderful those benefits were and how it protected them as they hustled for paying gigs and reassured them when they’d have to rely on odd jobs and passive income just to make ends meet.   I thought of her a lot last night, thinking of how many other people like her are probably among the many who hurry past me on the streets and in malls, still far too afraid to ditch their masks even outdoors and show their beautiful smiles to the world like she did to me.  I personally feel cheated every time I experience that, no matter how justified the other party may feel that they are.  I’m grateful that these actors at least have enough confidence in the protocols on sets to allow their full faces to be seen by the world at large as they get the chance to leave a legacy with their passion. 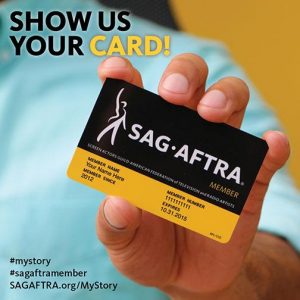 At a time when media companies are pivoting around streaming as their primary business model, where TV series seasons are sometimes being released in full day-and-date just like a one-off movie premiere, and where the historic walls siloing the movie and TV divisions of traditional studios are being torn down, the fact that Apple TV+ won the top award for a “motion picture” last night was especially noteworthy (way to go, Zack and Jamie).  Content is content, whether it’s two hours or ten, whether it’s subtitled or not, whether it’s spoken or signed, whether a tech company in Cupertino or a studio in South Korea is the originator.  I bristle when older-school companies try and pigeonhole my experience as being “only in TV”.  For the record, I’ve worked with exactly the same vendors and venues that my brethren on the “big screen” side have, and I can dissect a movie audience and that business model as surgically as I can TV or streaming.  And I can intelligently forecast what their world will look like in 2030 as accurately as I can recount what happened in 1970.  Just in case you might know someone with such needs.

I’m not an actor.  But I love and respect them as much as anyone.  Hooray for Hollywood indeed.