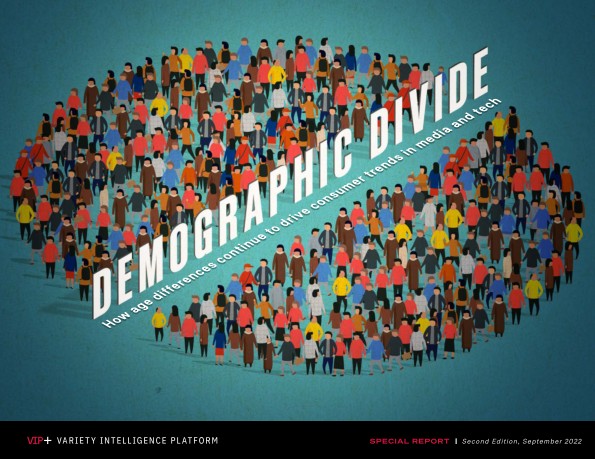 For my money (such as it is these days), there are few more valuable resources of information on media than the Variety! VIP+ platform, which frequently features deep dives often authored by the likes of Gavin Bridge, analyst extraordinaire.   Last week, a report called DEMOGRAPHIC DIVIDE: HOW AGE DIFFERENCES CONTINUE TO DRIVE CONSUMER TRENDS IN MEDIA AND TECH dropped, and for a data junkie like myself, it was like a fall harvest of ripe fruits and vegetables designed to be devoured.

I strongly encourage you to subscribe to this service to get the complete picture, but as I digested the bounty of charts and insights it became increasingly evident that if one were to go strictly off the conclusions, a lot of this can easily be dismissed as “d-uh”.  Witness a few of the topline bullet points that punctuate the piece:

— TV isn’t the most entertaining media for the younger consumers.

— New media is a potent force for pleasing the youngest consumers, but it shows the need for a diversified approach by brands.

— Yojnger consumers have a much greater and wider consumption of new media formats.

— How you consume the news is dictated by age.

Even the most casual observer could snark at simplistic conclusions like this.  Much as I try to be a voracious learner and respectful of what I can pick up from younger friends and colleagues. I don’t have the same baseline instincts or default choices as my twentysomething niece and nephew, and certainly not that of my roommate’s teenage son.  It often irks me that getting a voice call from my niece is something that happens only once a year or so, and that my roommate’s son chooses to binge-watch virtually every show he has any interest in.  (I do admire his stamina; even when I’m not as exhausted as I frequently am I can’t quite make it past the two-hour mark at any attempt).

But when you dig just a tad below the headlines, there are some true surprises.  Again, if you want the full meal (and you should), find the change in your couch cushion to do so.  But here are a couple of takeaways I thought were exemplary and worthy of showcasing: 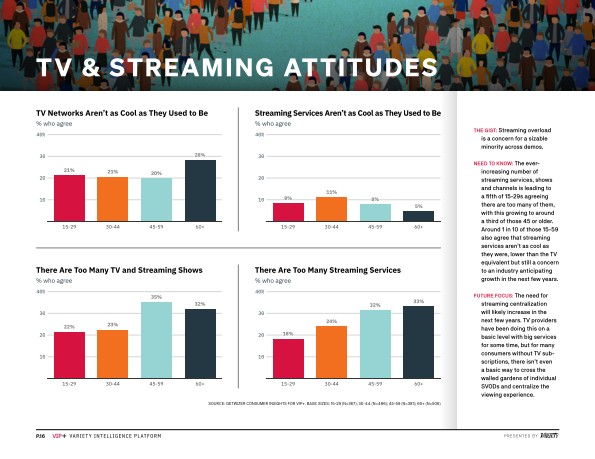 — Roughly a fifth of consumers in each of the fifteen-year age ranges of Gen Z-ish (15-29), millenial-ish (30-44) and Gen X-ish (45-59) think “TV Networks Aren’t As Cool As They Used To Be”.  The one outlier were 60+ Baby Boomers.  They were significantly more in agreement with that statement; slightly more than a fourth of the very demographic linear TV needs to survive doesn’t think it’s “cool”. 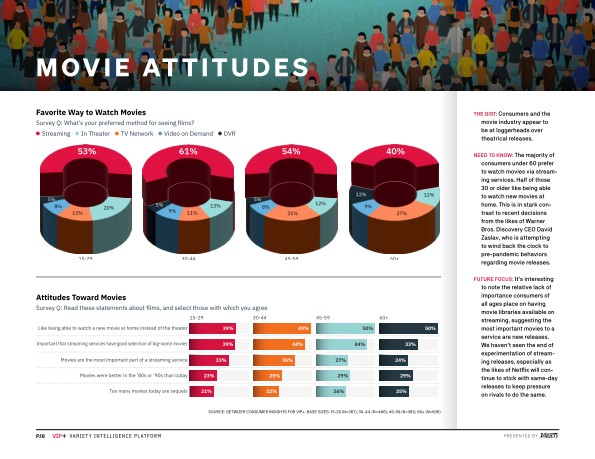 — More than half of each of the measured age cohort groups under 60 prefer to see movies via streaning services, and a significant plurality of 60-plus also feel that way.  As Bridge notes in his conclusions, this insight seems to contradict the determination of creators, as well as the new Warner Discovery sheriffs, to pivot back to a theatre-first release strategy.  That said, when you look a tad closer you’ll note that among these same demos, the greatest relative demand for theatrical release lies with 15-29 year-olds–the very demo that the struggling movie chain industry needs for its own survival.  Perhaps Yosemite Zas may be on to something after all?

Those are two examples of actual differences that are surprising.  But there are also some surprising similarities revealed as well.  For example, regardless of demo, Meta is perceived as both too powerful and in need of being broken up,  And while there is strong awareness of cryptocurrencies, the majority don’t know much beyond the terms–a common ground that is all the more surprising when joxtaposed against the more “d-uh”-like revelation that a quarter of both 15-29s and 30-44s own an NFT–while a mere 1% of those over 60 say they do.   The experiences I had with the in-person conventions I attended are that much more understandable given these findings.

If you’re looking to make sense of a media world that is ever-changing, and ever-confusing, let this inspire you to subscribe and download.  There are plenty of other excellent white papers on current trends that will help explain to you why you’re often simultaneously exhilirated and frustrated by the mere task of finding something to veg out with, let alone give you an edge in making any investment in companies looking to profit from this confounding.

Just be sure to convert back your etherium and Bitcoin to dollars when you do, and don’t send an e-mail and try to offer up your digital token as barter.  Remember the folks in charge are more likely to be in the 99% who have no idea what you’d be writing about.