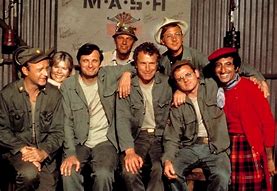 Exactly 50 years ago tonight, two new half-hour comedies from 20th Century Fox TV that mined the IP of their theatricals debuted back-to-back to lead off their Sunday night prime time schedule.  (Yes, this was before 60 MINUTES had that slot; in those days, it aired seasonally at 6 PM once the NFL season ended).

The first was a regrettably lame (and, in hindsight, racist) adaptation of THE KING AND I, ANNA AND THE KING.  One of Yul Brynner’s few television roles, the balance of the cast–and, of course, the lack of musical numbers made this a low-rated lead-off to a night that was still struggling for definition in the wake of the previous year’s demise of its longtime anchor, THE ED SULLIVAN SHOW.  After 13 tedious episodes, it deservedly faded into obscurity. 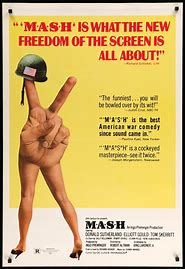 The second was an even more ambitious adaptation of a more recent theatrical hit, one that featured this provocative poster and had been released with an R rating.   It was a comedy set around the grim reality of the Korean War, which during the Vietnam era was far fresher in the minds of most adults, and arguably was a statement that, even with hot female lieutenants and fun-loving doctors, war is indeed hell.  But CBS needed something to battle NBC’s Wonderful World of Disney, and a sitcom based on M*A*S*H was clearly an alternative to Charlie and the Lonesome Cougar.

In less capable hands, M*A*S*H the series could have easily been a farce in the vein of HOGAN’S HEROES, a ridiculous yet popular show set around a World War II POW camp, or even F TROOP, which featured an underage sexpot and a Jewish Indian chief mocking the Civil War.  But in the hands of Larry Gelbart, one of the brightest comedy minds who ever worked for Sid Caesar, and Gene Reynolds, who was producing a thoughtful, timely and yes, funny comedy centering around a racially diverse high school in Los Angeles called ROOM 222, the series took on the concept of the movie’s characters actually living (and sometimes even dying) in oppressive heat and bitter cold, thousands of miles from loved ones, fighting a war against an oppressive Communist regime that many feared would ultimately infilterate the U.S., but those on the battle lines struggled to grasp exactly what the end game was.

Not exactly the backdrop for humor.  And indeed, the first episodes of M*A*S*H were not well received, either creatively or by Nielsen-rated households.  With an overcaffeinated laugh track and several secondary characters mined from the movie that simply didn’t register as series-worthy (anyone remember Spearchucker and Ho John?) , that first season was rated 46th, and last among the three broadcast networks that made up the media landscape of that autumn.

But as the show evolved, it found an ensemble of more relatable characters, led, of course, by the outstanding Alan Alda as Benjamin Franklin “Hawkeye” Pierce, whose voice was the narrative through which the series was told.  A brilliant surgeon yet a prankster inspired by the Marx Brothers, Pierce and his bunkmate, “Trapper John” McIntyre (an ideal second banana in the underrated Wayne Rogers), mixed their dedication to saving lives with outright anarchy, especially at the expense of their third bunkmate, the falsely principled Lieutenant Frank Burns, who was wantonly carrying on an affair with arguably the most desirable female lieutenant in any army, Margaret “Hot Lips” Houlihan.  The one casting holdover from the movie, Corporal Walter “Radar” O’Reilly, was adorably played by the young Gary Burghoff.  McLean Stevenson’s version of Colonel Henry Blake was more cartoonish at times than how the character was portrayed in the film, but the way that character was ultimately sacrificed in the tear-jerking episode “Abyssinia, Henry” (and the cast’s shocked reaction to the last-minute script change that had Blake’s character being killed off after his otherwise celebratory discharge, and their impromptu reactions being shot in real time) redeemed his legacy. 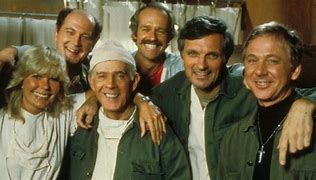 In later years, the series-exclusive replacements for Trapper John (Mike Farrell’s impish B.J. Hunnicutt), Colonel Blake (the more paternal, yet occasionally wacky Sherman T. Potter, endearingly portrayed by the revered Harry Morgan) and Lieutenant Burns (the insufferable–yet, once again, brilliant Charles Emerson Winchester III, as intoned with elitist Boston tones by the talented David Ogden Steirs) caught on, as did the more prominent use of an original secondary member, the cross-dressing and Section 8-obsessed Corporal Maxwell Klinger, initally played for comic relief by the wonderfully slapstick Jamie Farr.  In later years, the Klinger character eventually lost the dress and took on a leadership role in the 4077th, and has made the venerable Farr as ubiquitous a spokesman for the legacy of this series as anyone. 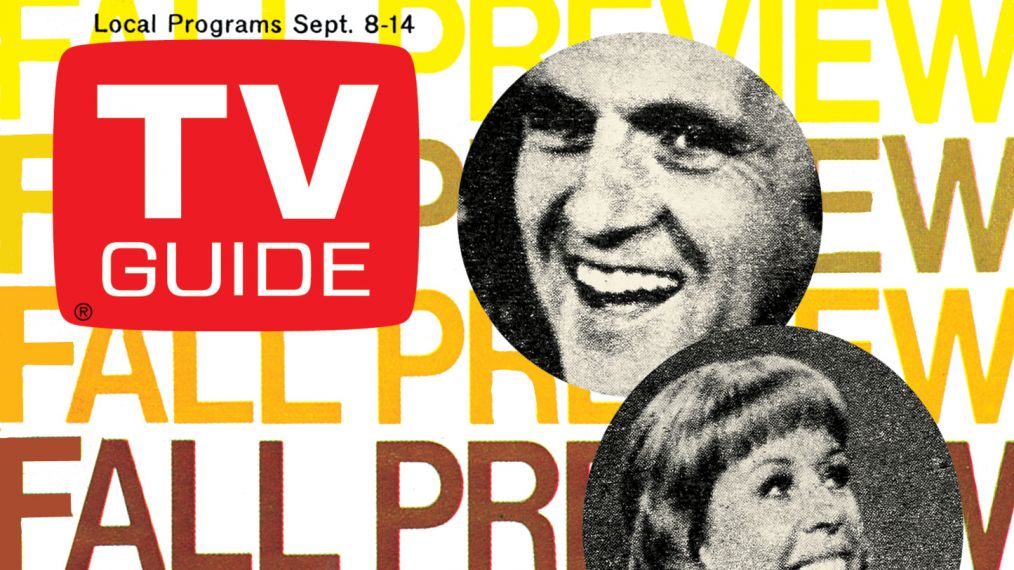 But by the time all of this change happened, the biggest change that cemented its longevity had already occurred.  In its second season, M*A*S*H was moved to a “hammock” Saturday night time slot between ALL IN THE FAMILY and THE MARY TYLER MOORE SHOW, with THE BOB NEWHART SHOW and THE CAROL BURNETT SHOW rounding out the lineup.  All of those shows rank among TV GUIDE’s all-time list of the 60 best series in history, and with M*A*S*H one of the final touches on what was arguably the single best lineup of a night of TV on one network in history, ratings improved nearly 50% from that first season, and despite several other moves along the way afterwards, M*A*S*H never looked back.  It continued to achieve top ratings for another decade. 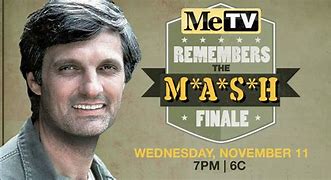 Its series finale on February 28, 1983, a two and one-half hour tour de force entitled GOODBYE, FAREWELL AND AMEN that capped off 255 half-hours of comedy and pathos, still ranks as the highest-rated episode of a scripted television series in history.  The 60.3 rating it achieved on that wintry (and, in Los Angeles, rainy) night is rarely equaled these days by the total number of homes watching ANY measurable television at one time, let alone one network.  And by that time the series was on at least five times a week (and, in some cities, as many as 15) as the highest-rated off-network series ever released to television stations.

Out of a bumper crop of 1979 releases that also included HAPPY DAYS and ALL IN THE FAMILY, M*A*S*H reruns sky-rocketed to double-digit ratings primarily competing with evening news and game shows in major cities on independents, and in many cities following late newscasts on network-affiliated stations that resulted in stations delaying NIGHTLINE and CBS’ pre-David Letterman late night efforts by at least half an hour.  As someone who helped sell those reruns when the profits they realized secured the livelihoods of the lucky bastards who got commissions for selling them and the bonuses from their station ownership for the ratings that theur buyers achieved with it- particularly at a time when the 20th Century FOX studio was struggling was existence–I marveled at the power it harnessed, the dedication of its fans and, as I was privileged to experience, the respect of its cast, crew and profit participants who I came to know as colleagues and friends.

To this day, diginet MeTV runs two episodes each weekday in the same 7-8 PM ET time slot independents ran them in more than 40 years ago.  They regularly rank as the network’s most popular shows, often reaching more than 1 million viewers and eclipsing the audience of a majority of cable networks.  Yes, an awful lot of them are over 50, forever reliving the viewing habits of their youth.  But hundreds of thousands of those viewers aren’t 50, and for many this is their first chance to see these episodes.  And even without the lens of recency and the direct experience of Korea, or even Vietnam, these “younger” viewers have grown to love and respect the nuance, emotion and yes, the insanity of these characters, its talented and revered writers (yeh, Ken Levine, that includes you) and, of course, Gelbart and Reynolds (not to mention prominent director Burt Metcalfe).

We’ve lost many of those talented people over the years, and most of the surviving cast members are now well into their 80s.  But as the tributes from MeTV and other media (print/digital mostly) have popped up as this golden anniversary week approached, and as the recountings of a newly found generation of fans sre included, it’s heartwarming to realize that the chance that 50 years from now our descendants will find M*A*S*H as venerable as those who have it now, and might be as motivated as yours truly to sing its praises when its centennial is observed.

Thanks to all who ever touched this work and who have touched me over the years.  I truly hope Abysinnia you all again soon.