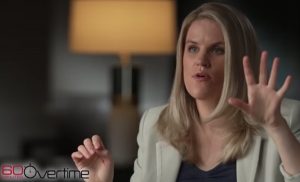 Frances Haugen started trending this past weekend and literally broke the internet in the next 48 hours.  Call it the epitome of irony.

Haugen, a former Facebook employee, gave a powerful interview to 60 MINUTES Sunday night and compelling testimony to Congress yesterday, blowing the whistle on what she described as a business culture that willfully ignored internally commissioned research revealing how significantly its product negatively impacted the minds and psyches of its end users, choosing, as she described “company over country”.  Haugen described a career where she worked in product development positions at several other tech companies, and felt a moral calling to alert the world to what she considered to be morally egregious behavior, amplified further by decisions reached at the outset of the pandemic last April where the opportunity for even greater amounts of screen time presented itself.

It’s pretty clear that everything Haugen said is accurate.   As an experienced media researcher, I can fully identify with the degree of shock people with a conscience express when they are privy to the antics of executives with personal financial agendas and commitments to their board members when they are presented with the honest feedback of their consumers.  She is completely justified in her outrage and frustration.  She is also very late to this party, and clearly has not had significant experience in media or entertainment, or that matter packaged goods companies.

The very foundation of capitalism is based on the ability of companies to convince people to part with their most essential personal resources–money or time–to engage with their products.  Those that do so more successfully thrive; those that don’t go out of business.  Good research never attempts to provide mandates; it merely provides guideposts to making decisions with some degree of context.  Any expectation otherwise needs to be checked at the door.  There’s a reason most market research is conducted either in nondescript office complexes in suburban America or within password-protected silos online.  There’s a reason good moderators insist there are no right or wrong answers.  Research is sterile.  Reactions to research are not.  And the decisions consumers make for themselves should not be blamed on the messenger that fed them the information they used to make those choices.

If Haugen’s principled response is to be taken at its face value, then the problems she identified for lawmakers with Facebook need to be addressed with movie studios, content providers, streaming platforms, advertising agencies and the makers of any food product imaginable.  Every day we make choices that we know are not the smartest for our physical and fiscal well-being, particularly in the often desperate times we live in.  Personally, I probably shouldn’t have had the apple crisp machiatto I chose to have on my pre-dawn walk this morning.  I got a sugar rush and an upset stomach.  Am I going to run to Congress to blame Starbuck’s for making me want their $6.25 indulgence, or kick myself mercilessly for spending it?  Maybe I should, but I won’t.  I’ll think twice before I do it again, but the ultimate responsibility for how I react to what I am presented with lies with me.

And that ultimately is where the real issue with social media messaging lies.  Yes, Facebook advances content meant to promote political dissent and Instagram pushes images of impossibly attractive people to aspirational teens, and they use sophisticated algorithms to do that.  So does Netflix.  Any advertiser who has run a TV commercial or a pop-up ad does so as well.  I recently bought salmon skin chips as a result of an ad I saw on my Facebook feed.  They were OK, but clearly not worth what I spent.  I’m not running to Capital Hill to demand salmon be regulated to only be provided to canneries.

Leblanguage is based upon rigorous honesty, starting with ourselves.  We are human.  We will make mistakes.  We will suffer some consequences from them.  But most of us will recover, or at least find it within ourselves to seek the help to do so.  Haugen’s testimony may ultimately help “victims” of social media by calling attention to these business practices, perhaps encouraging the Facebooks of the world to invest some of their profits in programs to help promote fairness and positive body imaging.  But it should not be her expectation, or the responsibility of government, to silence anyone who has disagrees what what she perceives to be correct.  It’s on each of us to make our beds and live in them.  Anything other than that IS an authoritarian state.  Other than true Trump loyalists, I do not believe we want that.

There are no right or wrong answers.  It’s the essence of the research Haugen implores we listen to.  We should.