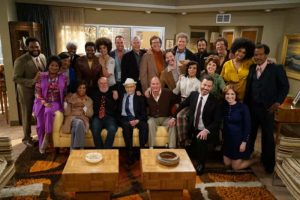 Simply put, Norman Lear is a living legend.  He has worked in television for almost 70 years, creating breakthrough and iconic content that has challenged mores, made us laugh and think and passionately believes in freedom, justice and the human spirit.  He’s personally made hundreds of millions of dollars in the process but he’s raised as much for causes he supports and has enriched the lives of countless employees along the way.   He has certainly enriched mine.

I had the chance to work with Norman not only on the first two installments of LIVE IN FRONT OF A STUDIO AUDIENCE, a passion project of his and Jimmy Kimmel (whose third iteration, stagings of classic episodes of DIFF’RENT STROKES and THE FACTS OF LIFE, will air tonight on ABC), but on his recent reboot of ONE DAY AT A TIME for Netflix.  To see a man well into his 90s actively navigating several soundstages, intimately involved in every production decision and rewrite late into a tape night, yet have the time at every taping to take questions from (and feed!) a studio audience was as inspirational as anything I’ve ever seen in a studio.  Several of his colleagues who had worked with him on the original ODAAT in the 70s and 80s remarked to me “If you think he’s impressive now you should have seen him then”.

At that time Norman was responsible for the production of several hours of primetime network television at once.  ALL IN THE FAMILY.  SANFORD AND SON.  MAUDE.  ODAAT.  STROKES/FACTS.  GOOD TIMES.  MARY HARTMAN, MARY HARTMAN.  Etc.  Etc.  Norman was indefatiguable, his shows almost always hits and his influence on the medium undeniable.  Decades after their last productions these shows continue to find new generations of fans via ubiquitous airings on local stations and on cable TV and a strong presence on streaming services. 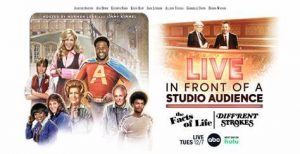 I had the chance to work on LIFASAand reported on how strong and engaged the social media conversation was surrounding the first two live broadcasts.  Two years ago the second broadcast butted up against the vote to impeach President Trump.  In fact, the East Coast feed was shown on time-shift as ABC broke away to show the live vote.  Guess which event had more conversation on Twitter, Facebook and Instagram that night?  Hint: it wasn’t Trump.

I also had the chance to work with him on a pilot he did for NBC called GUESS WHO DIED? in 2017, one of the few times in recent years Norman’s name alone did not guarantee an idea went to series.  Pilots require research, and Norman is notoriously leery of it.  ALL IN THE FAMILY was gutted at ABC twice by weakly testing focus groups (though Norman admits in hindsight that they did reveal that there was a need for stronger performances from the co-stars).  By the time he did a third pilot for CBS he had found Rob Reiner and Sally Struthers, who complimented Carroll O’Connor and Jean Stapleton and created one of the strongest casts in sitcom history.  Norman–(er, Mr. Lear–he’s earned the right to such respect!)-isn’t a creative who despises research, but he is one who insists that it be meaningful.  He hadn’t attended a focus group screening in several decades, but he did intend the one I sheparded for GUESS WHO DIED?  And that produced perhaps the most exciting two hours of my career.

Audience testing has evolved over time, with the traditional dozen people around a table giving their opinions being supplemented by a nationwide sample of nearly 200 people watching a show simultaneously at nearly 40 venues around the country within a few hours of each other.  In real time, we capture respondents’ demographics, likes and dislikes and suggestions and produce a statistically viable sample that both producer and network can use to evaluate the potential of a project with actual input from its target audience.

I was responsible for showing Mr. Lear and his team the detailed results, with an interactive computer terminal at the center of the room to display dial results cut by audience breaks as diverse as adults over 60 who like WILL AND GRACE.  Norman said had never seen research this robust nor as colorful.  After we delivered the results he insisted on sitting with myself and our vendor in front of the terminal and asked us to show him exactly how this information was compiled and played with the interface to display dozens of other data cuts, some of which we hadn’t even thought of.

This 90-something icon was my de facto student, and I was as giddy as I had ever been professionally.  The show hadn’t tested all that well (it did not sell) but Mr. Lear was grateful for both the insight and the lessons.  Every time I’d see him after that he’d warmly greet me as “Numbers Guy” and pick my brain on anything else on his mind.  Believe me, the man hasn’t spent a day in nearly a century on Earth where he doesn’t have something on this mind.  I’ve never been prouder of being considered a consigliere of anyone than having been so by him. 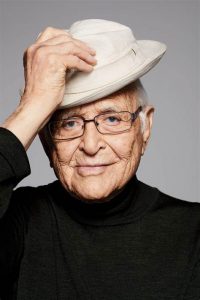 Tonight’s episodes will feature the likes of Jennifer Aniston, Gabrielle Union, Kevin Hart and Damon Wayans recreating shows they, like so many of us, watched as kids on Saturday nights and on countless weekday afternoons in reruns. John Lithgow, Jon Stewart and perhaps George Clooney will be along for the ride as well.   There are also going to be live performances of the shows’ theme songs, ones that almost anyone who has ever watched a television in the last half-century can sing along to (“You take the good, you take the bad, you take them both and there you have The Facts of Life”; “Now the world don’t move to the beat of just one drum”  Go ahead, you know more lines.  Sing along).

Fun fact:  Alan Thicke and his ex-wife Gloria Loring were responsible for both of those themes.  My money is on Robin Thicke to perform at least one of them.  That said, Jennifer Hudson belted out THE JEFFERSONS’ theme “Movin’ On Up” last time, so one never knows who might show up tonight.

When Mr. Lear’s Embassy Communications was acquired by what is now my former employer Sony Pictures Entertainment he rewarded numerous executives with generous severances that allowed many of them to buy homes and finance their children’s educations.  Many of them continued to work at Columbia afterwards–bluntly, at the time Embassy was far better at making TV than was Columbia.  Thankfully, Mr. Lear continued to work with them, and he still does.  We’re all way better off because of it.

When I’m almost 100–and I fully plan on that being the case–I pray I have half his lucidity, a tenth of his level of physical health and a silver of his financial success.  I’ll be in darn good shape if that comes to pass.

Merry Christmas, Mr. Lear.  And thank you for letting this grateful fan experience you.