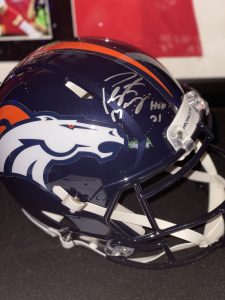 This week’s report that Byron Allen, one-time REAL PEOPLE co-star turned billionaire entertainment entrepreneur, was bidding to own the NFL’s Denver Broncos was seen in some circles as shocking.  How could Allen, whose reported net worth is a fraction of those of the likes of other current NFL owners, and with no experience in running a sports franchise, let alone one from the most popular league on Earth, think he could be a legitimate candidate?

He’s absolutely the real deal and is far more than merely legitimate.  As anyone who has followed Allen’s career as closely as I have already knows, not only should this not be surprising, it should be considered yet another example of perseverance, timing, and gut instincts that has seen him rise from mere comic talent to the owner of Comedy.tv and several other networks (including The Weather Channel), television stations across the continental United States and Hawaii, thousands of hours of content and a champion for African-American and minority entrepreneurs to get fair treatment in a corporate world often devoid of it.

I first met Byron soon after I earned the responsibility to program the FOX owned-and-operated stations.  Most of the pitches I would get would be from the heads of sales of distribution companies and a couple of their minions, frequently parading into my office between Halloween and MLK Day like an endless sea of court jesters, armed with chart-heavy sales presentations, swag and aggressive, often disingenuous negotiating styles that often would leave me shaking my head when they would inevitably choose to take a bathroom break.  I was perceived as a tough sell, both because the FOX I worked for was adamantly against ceding any crucial time periods to other companies and because I knew all too damn well many of the numbers they used in their pitches were, frankly, bullshit.  Plus, I didn’t play golf and I had no spouse to cheat on.  So it never surprised me that talent almost never tagged along to my meetings, lest their sales team be embarrassed by not being able to make a sale in my office.

Byron was an exception.  Not only did he come along when I was offered the first BYRON ALLEN talk show for my stations, he drove the meeting. BYRON launched his talk show, ten years in the making, on the heels of what turned out to be the successful launch of THE ARSENIO HALL SHOW as a younger, urban, five-night-a-week competitor to Johnny Carson, and a de facto replacement for FOX’s first network failure, THE LATE SHOW.  Barry Diller bet heavily on Joan Rivers 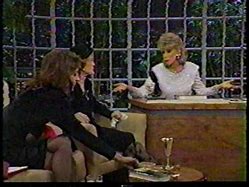 to launch the network with that show, and it was a tragic disaster.  Ratings were horrid, Joan never spoke to Johnny for the rest of her life and the pressure he and his colleagues put on Joan and her husband/producer Edgar Rosenberg to right the ship eventually drove Edgar to commit suicide.  It was an inauspicious start for Barry. At the time I worked closely with him, at times sharing an office suite and an assistant when he’d have meetings on the East side of town.  The last thing Barry wanted to do was to be shown up with a late night show from another company that would reinforce what a disaster his choice of Rivers was.

When Byron and his salespeople marched in, I opened the meeting with Leblanguage as brutally honest as I’ve ever been, relating these inexorable facts as a framing to what I knew was going to be a quick pass.  His sales team was initially aghast, determined to reinforce the early Hall numbers as proof that Byron’s once-a-week show was the perfect weekend companion and/or way for stations like mine who competed with Arsenio to jump on the cool train express.  Byron immediately took control of the meeting and said to me, “Look, I know you’re not a buyer.  But I want your opinion.  I have a full pilot for you to watch.  I just want to watch you watch.  You’re hardly my target demo and frankly, I want to have a broader appeal than Arsenio.  Consider this a chance for you to be the respondent rather than the researcher.  I’d like to learn from you”.

I watched the show. 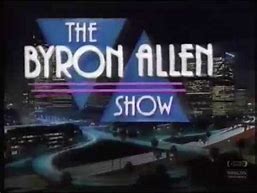 It was fine.  Byron was funny, the music was hip, the guests (IIRC, Whoopi Goldberg was on that pilot) were entertaining and compelling.  I asked Byron if he thought it was a little too similar to Arsenio’s show.  He shrugged and said “Why should I care?  I don’t compete with him directly; I respect his popularity and I’m just being me.  The show’s gonna get on the air.  We’ll make it as long as I want to.  I’m just gonna keep learning on how to do it better from people like you”.

My respect for him was immediate and electric.  I doubt he saw me as anything close to the level of mentor that he saw Al Masini, the creator of ENTERTAINMENT TONIGHT whose name he includes in the credits of his shows todays even though Masini has been dead for years.  But his positive attitude was undeniable.  I was anything but surprised when his show launched in 96% of the U.S. later that year.  And when the show did not get renewed after three middling seasons, Byron decided to start his own distribution and production company to assure that he would have more control over his passions and livelihood.

Byron has seen his syndication-centric company grow into a conglomerate that today spans the gamut of linear and digital TV as noted.  He has challenged the likes of Comcast to assure his networks get distribution.  He has been a champion for the stand-up comedy industry, giving many veteran ones a national gig on his daily FUNNY YOU SHOULD ASK game show long after many other shows stopped booking them (I’ve heard they have great executive producers, too). 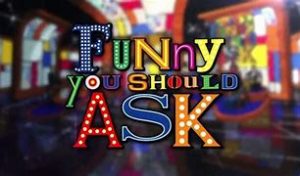 When the pandemic first devastated the country, he partnered with Funny or Die to put many of those veterans and many up-and-coming ones to work on FEEDING AMERICA, a special that raised awareness for hunger and the need to put food on people’s tables when many lost the chance to work or even shop.  His family contributes significantly to numerous other charities, including ones for Lupus awareness that I once had an association with myself.

So if anyone thinks Byron can’t run the Denver Broncos, think again.  Think about this.  He timed this announcement soon after Brian Flores filed a class action suit against 32 NFL teams and reminded people that the Rooney Rule that theoretically protects his right to interview for NFL coaching vacancies was, in his case, a preordained sham where hiring decisions had already been made by owners that are, currently, exclusively white.   Roger Goodell has spent a good deal of this pre-Super Bowl week stumbling for an explanation and a strategy going forward.

Hmm.  Perhaps considering a Black owner at a time when Black coaches aren’t might be a pretty good PR move?  Particularly as the league enters into its next window to negotiate media rights that will likely move into twelve-figure territory?  And hey, this has all happened during Black History Month!!

Anyone who has pursued a career in comedy will tell you the secret to a good comic performance is timing.  Know when to get on the stage, know when to get off.  Decades ago I saw Byron had those instincts in both comedy and business.  They’ve served him well.  He may not be quite your taste in joke-teller, producer or mogul.  But your opinion won’t break or deter him.  I’d like to hope my opinion that he’s a winner in every sense of the word might matter.  It likely won’t.  But it won’t stop me from offering it.  After all, I’ve learned from the best.