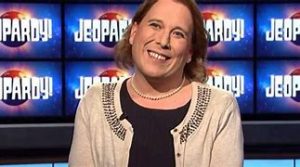 No one close to me died yesterday, thank G-d, so I could move on to something else.  And, thankfully, JEOPARDY! has moved on from its troubled 2021 to a stellar start in 2022 both ratings and zeitgeist-wise.  Now under the supervision of Michael Davies, who moonlights as a very passionate soccer (ahem , “football”) fan and the host of MEN IN BLAZERS, the show has found yet another million dollar superchampion, Amy Schneider, who now is being scrutinized in a way no prior champion ever was.

This week, Sony and JEOPARDY! announced the introduction of the JEOPARDY! Box Score, bringing to light the same kind of highly detailed analytics and statistical nuance that has emboldened a new generation of sports fans who love theis intersection.  Not only will Davies and his team report on how many answers were questioned correctly (you read that right, this is JEOPARDY! we’re talking about!), but for the first time detailed information on how successful each contestant was on attempts to buzz in as well as how correct the responses were after being first to the buzzer.  As Davies

passionately explained in the release:

You will see from the box score posted for today’s episode, Amy’s 31st win, that it is a dense, stats-filled spreadsheet. It will not be for everyone, just like a MLB box score isn’t for everyone. But for many of our fans, it contains some fascinating information. For the first time ever, we are making public the “lock-in” or “buzzer” data that we collect in every episode but have never published before. Now you’ll be able to see, for example, that in today’s game Amy attempted to buzz in 46 times in the Single and Double Jeopardy! rounds. She was successful 32 times and gave the correct response 30 times (right around her elite daily average). But you’ll also see that her opponents, Emma and Ally, made 57 attempts to buzz in between them in Single and Double Jeopardy!, but were only successful a combined 19 times. And hence, the game became a runaway. 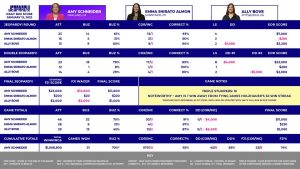 Put in further context, Amy Schneider had 46 attempts and “completed” 30, a 65.2% percentage.  In the thrillingfinale to his season,  Los Angeles Chargers quarterback Justin Herbert completed 34 for 64 of his pass attempts, only a 53.1.% completion rate.  Amy won her game, Justin lost his.  Surprised?

The timing of this additional way to follow a daily competition, as a fascinating (and, sadly, polarizing) champion comes on the scene, mirrors the growth we are seeing in both the amount and way professional sports and media is being both consumed and valued.

The NFL announced this week that it had posted roughly a +10% year-over-year improvement in overall audience for its regular season, rising to just over 17 million viewers per game, factoring in newly available metrics from both out-of-home and digital viewing that allows consumption to be measured beyond those merely sitting at home watching on traditional TVs.  As the league attempts to finalize its future with its Sunday Ticket package, as well as other rights well into the 2030s, it is essential that the reality of a screen-agnostic world be realized and, therefore, part of the massive valuation those components will receive.

Statistics, particularly those that drive fantasy participation, drive a tremendous amount of the engagement and interest in games.  I’ve already discussed my own love for fantasy sports, and with the way things have been going lately I had the time and bandwidth to have had two of my most successful fantasy football seasons of my lifetime.  Fantasy baseball has been my top passion, and has been even more statistics-driven than football.  With that backdrop, as well as the aforementioned improvement in being able to quantify who is watching where, it’s a bit less surprising to learn that Apple TV+ , 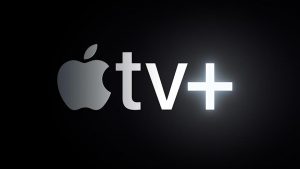 For Apple, this can provide not only a source of live content ideally suited for IPhone viewing as fans venture through summer afternoons, this also provides a way for an older-skewing sport like baseball to find a younger, more valuable fan base via the ability of these games to be viewed on screens that are connected to apps that allow for daily fantasy games and mobile sports betting.  This past weekend, New York became the latest state to legalize mobile sports betting, and just in time for the double whammy of a couple of winter storms and peak Omicron panic.

Perhaps the only snag in this potential win-win is the small little fact that currently MLB players are being locked out by owners, and only began discussions toward settling that yesterdy.  Initial reports were that the players’ union was not impressed, increasing the likelihood that spring training, scheduled to start in roughly a month, might be delayed, and therefore so might the season.

So here’s some unsolicited advice to my former Sony colleagues Zack Van Amburg and Jamie Erlicht: 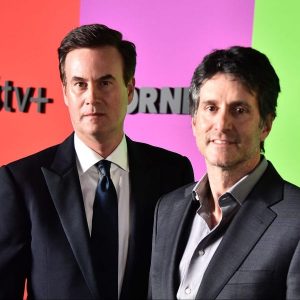 Maybe y’all should make an offer on non-exclusive digital rights to JEOPARDY! to fill the gap?  It’s possible that Schneider, or perhaps another champion, will be going strong, and all of the multiplatform and multiple revenue stream options you’re consideirng with MLB could easily apply to a daily Jeopardy! telecast.    That minor little thing about availability?  Just buy out linear TV completely, or just buy a first exhibition window that will tie the first daily availability to you and make linear TV secondary.  If you think that sounds radical, consider that Peacock Plus subscribers can see both The Tonight Show and Late Night several hours earlier than they can be seen on NBC.  For the right price, I’m sure Sony would listen.  Think of it this way:  when you produced Emmy Award-winning programming on the other side of Culver City, JEOPARDY! made tens of millions of dollars in profit that allowed you to deficit finance the shows that won those awards and cemented your reputations as purveyors of quality content.  If you won’t be able to tap into Fernando Tatis, Junior to do that, maybe Amy Schnieder can pinch-hit?

1 thought on “Did You Know Amy Schneider Outperformed Justin Herbert?”